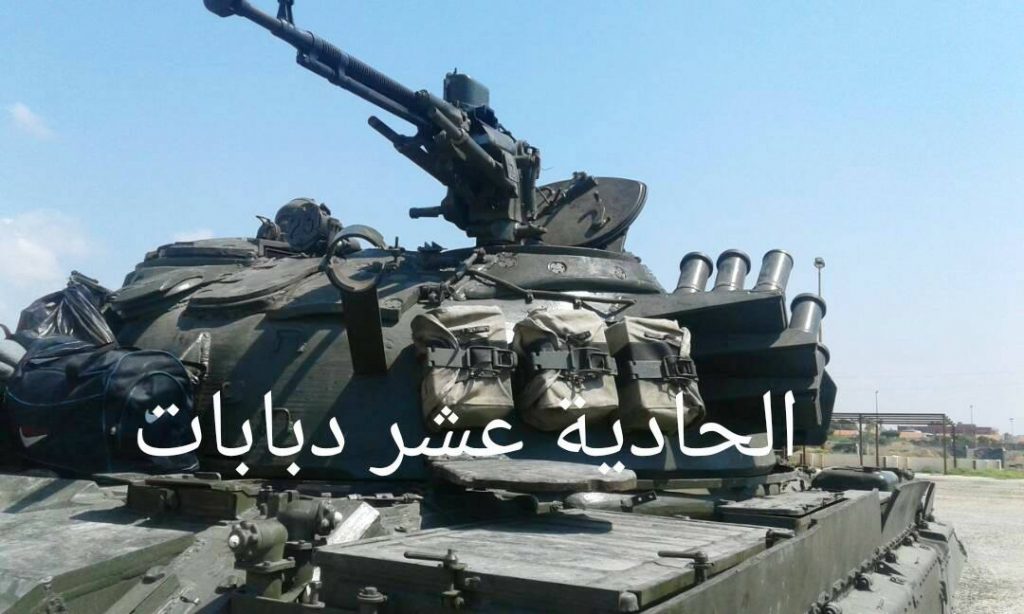 Russia has delivered a new batch of T-62M battle tanks to the Syrian Arab Army (SAA).

The battle tanks were allegedly delivered to the 11th Armoured Division of the SAA, according to new photos appeared online in pro-government social media accounts.

The supplies of T-62Ms have been reported by various sources since 2015.

These tanks have the armour add-ons called “Brezhnev’s eye-brows” by their crews (even in the Cold War days).

Who said Russians don’t have a sense of humour?

As far as I know the only people said to have no sense of humor are Germans. And yet they gave the world Rammstein.

To be fair, Rammstein’s members are former East German so there had to be some transfer of the sense of humor to them.

Sry to say but it seems that you know little about Eastern European sense of humour. Secretly, people were making jokes about political system in USSR and other comunist countries, it was kind of a taboo, but that doesn’t mean that people didn’t joke about all those “forbidden things”. Slavic people are not stupid, we may not be economically strong and developed but a lot of Slavic people are sharp and very capable to percive things

Looks like Russia is cleaning its old inventory. I don’t see anything wrong, so long Syria gets for free or at least at discounted price. Fighting with ISIS and FSA SAA does not need better tank so long has thicker armor at the tower. Unfortunately, SAA will need better tanks fighting Israel or Saudi and any western countries including america or even Turkey. Therefore, Assad should be prepared to invest in better military hardware, specially SyAf and Air Defence System and high tech military electronic for special forces and better armament for infantry units. Army this days does not have to be big in numbers, but smaller and high train and better equipped with latest high tech military hardware

“SAA will need better tanks fighting Israel or Saudi and any western countries including america or even Turkey.”

or, more likely, cause and effect are reversed:

Syria is getting T-62Ms because they are good tanks in counter-terror perspective. That means that those in power position know that there won’t be any war with countries with modern tanks.

Not to mention that in the latest months we’ve seen pretty much all the “modern” tanks in action in Syria being mauled by old ATGMs like Fagot and Konkurs (with the exception of Leclercs or Challies 2, which anyway aren’t much different from Leo-2 or M-1)

Yes, you have point that I am aware in regards tanks this day. In 21 country the protecting and defending country will be Air Force, Air Defence System and High tech military hardware includes electronics and high tech weapons. Each army will still need some tanks, but not many

The modern tanks arnt supposed to be resistant to ATM’s / ATGM’s of any age! They are merely supposed to either avoid being hit, minimise the damage and save the crew! If a tanks crew survive a direct hit, then the tank has done its job! If an experienced ATM operator misses his target, then the tank and crew have done their job! If a tank survives somewhat due to its armour and active protection, then the tank has done its job! Modern tanks are more about survivability than they are about being mobile and useful in modern warfare! Because a single man (hard to detect) can destroy a tank now! So survivability becomes the number 1 aspect! Saving the crew and minimising damage!

dude don’t be that trenchant.

Modern tanks are supposed to resist hits from a spectrum of offensive weapons, including ATGMs (actually, the correct way is HEAT warheads – there is no difference between a RPG round or a ATGM missile, their warheads work the same way).

That spectrum is defined when requirements for the new tank (or its upgrading) are drawn up.

Also, you must keep in mind that a “Main Battle Tank” is not made for “survivability”, but to accomplish a range of missions.

Of course, survivability is high on the prioritization in the requirements, because it directly affects the likeness of the vehicle to accomplish its mission.

To use an exaggerated example; if what you claim was true, tanks would be made like huge steel turtles without turret, weapons or optics; with a crew riding aimlessly around behind 2 meters of armor.

Moreover, single men were more or less able to destroy tanks since it was firstly deployed. In WW2, individual weapons such as Panzerfausts, Bazookas, or HEAT grenades were deployed in such numbers to make the usage of tank units vs infantry suicidal, in places where engagement ranges are short.

To summarize: The survivability of the Main Battle Tank does not depend on its armor thickness, or its mobility, or any other technological single parameter. It depends much more on doctrine, tactics and training of its crews and of the combined arms personnel taking part in the same battle-plan.

The reason why MBTs are employed is to perform a mission, and everything else is based on making sure to accomplish that mission – including survivability.

you can see Iraqi M1A1/A2 Abrams tanks being destroyed by ISIS also using Fagot and Konkurs ATGM’s. It seems that it much depends upon level of crew training and other factors (like air superiority, artillery preparation, infantry snipers disabling ATGM crews etc.)

yes, that was the point. It’s doctrine and tactics, training and motivation that are the indispensable elements in warfare.

Technology plays a much lesser part than normally perceived by the layman.

You are 100% Wright getting more armoury to supress the enemy which is supported by big pathon Trumps USA=UN NATO is better.Getting advance armoury will be a lost to sabotage as the country is use as a testing ground like in Angola,South West Africa and Sudan.Let Putin use the advanced weapons to attack as he buy face with Erdogan and Fat Fuck Trump.

Yes big numbers are needed for invasions and occupations

Well ISIS were mobile in the open terrain because they were taking land, not defending it! In the case of DeZ, they will be defending, they will not be mobile because there will be no place to run to! Therefore arming the SAA with tanks will be sweet! The only defence will be another tank (which we know they don’t have many of) or ATM’s of which most seem to only damage tanks and not kill the inhabitants of the tank! If these t-62M’s are fitted with good armour and active protection (which they are) then we should find the SAA serving most ATM attacks! Of course these tanks will be supported by mobile forces! Its going to be a slaughter! The SDF have nothing like this! Even they won’t be able to fight against the SAA unless they get similar hardware! THIS WAR IS OVER!

This is huge number. Some complicated logistics required to deliver such quantity. Where did you get this number?

Really, nice I hope so.

I wonder what happen to the terminator, still no news from the war zone

Hopefully getting some miles on the clock in the Uqaribat pocket

Good to see these old girls are getting put to good use somewhere where they are needed rather than sitting in a warehouse in Siberia. These can take a hit too with their “Ilich’s Eyebrows” BDD armor, good stuff.

A link on how BDD armor works – http://ciar.org/ttk/mbt/armor/armor-magazine/armor-mag.2002.mj/3BDDarmor02.pdf

A T-62 with BDD surving a direct hit from ATGM near Palmyra – https://youtu.be/sO-jV_T8PXI