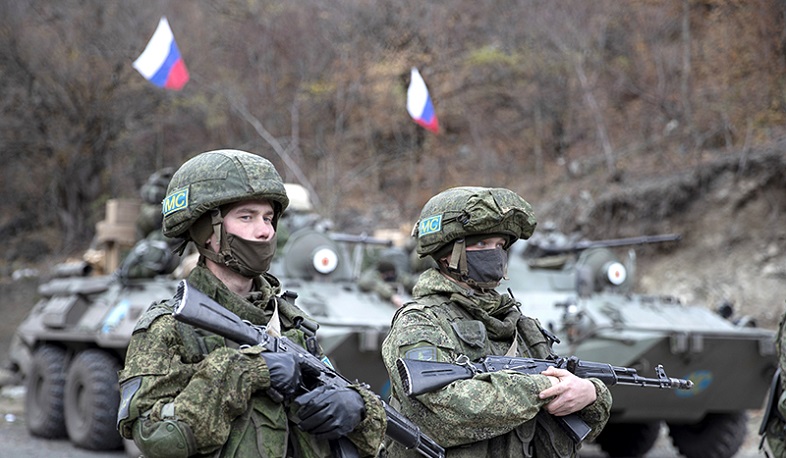 Moscow has called on Azerbaijan and Armenia to exercise restraint and comply with the ceasefire regime in Nagorno-Karabakh in the wake of a deadly exchange between the two in the disputed region.

Azerbaijan accused Armenian forces of attacking its military positions in the Lachin corridor area, which is under the supervision of the Russian peacekeeping force, and killing one of its soldiers on August 3. On the very same day, the Azerbaijani military attacked Armenian military positions on the northwestern part of the frontline in Nagorno-Karabakh with artillery and combat drones, killing two Armenian soldiers and wounding 14 others.

The exchange defined the ceasefire that was brokered by Russia less than two years. The ceasefire ended a large-scale Azerbaijani offensive on Nagorno-Karabakh, which claimed the lives of around 7,000 people from all sides.

In a statement released on August 4, the Russian Foreign Ministry voiced its hope that the warring sides will use diplomatic and political means to resolve the conflict in Nagorno-Karabakh.

“We urge the sides to exercise restraint and comply with the ceasefire regime. We expect that the existing controversies will be resolved exclusively via diplomatic and political means, with consideration of both sides’ positions and in strict compliance with the statement, adopted by the leader of Russia, Azerbaijan and Armenia on November 9, 2020,” the statement reads.

The ministry also expressed its extreme concern over the escalation in Lachin, as well as on other swathes of the contact line.

“Unfortunately, there are casualties. We express our deep condolences to the relatives and the close ones of the dead, and we wish speedy recovery to the injured,” the ministry said.

The minister said in a latter statement that Russia’s top leadership, including Foreign Minister Sergey Lavrov, are in close contact with their counterparts from Armenia and Azerbaijan over the situation in Nagorno-Karabakh. The Ministry also stressed that Russian peacekeepers are exerting all necessary efforts to stabilize the situation on the ground.

“Active work is in process with both sides via all channels and on all levels, including the top national leadership. Russian Foreign Minister Sergey Lavrov is in close contact with his counterparts from Azerbaijan and Armenia,” the Ministry said.

The situation in Nagorno-Karabakh is currently stable. As of August 4, no new attacks were reported by Azerbaijan or Armenia.

Azerbaijan has been escalating since July 31, when it accused Armenian forces of attacking its troops. Baku, which appears to be unsatisfied with the current ceasefire, could be preparing to launch a new large-scale offensive in the disputed region.

Baku is doing absolutely right. That being said, I despise it’s regime as much as I hate axpers 🇦🇲 since their relations with the shitskin hebrews ✡ are really strong.

THAT WILL NOT STAND.

Russia as peacekeepers should take an assertive unbiased stance between the two clashing countries, just like a referee in a combat sports ring making decisions that has to be respected by both sports competitors. Any defiance would be slapped with a nasty consequences.

we #1 lgbt monkeys—God has sent us into degenerate cesspool—do you prefer to swallow black lives matter sperm or okie sperm?

Is this just a fight over land? Sometimes I want half of my neighbours garden too but when it comes to cutting the lawn, I dont and when they give me home grown whatevers, I dont either. So is there a message here?

The land is Armenian people’s historically, and also contemporary Armenia was cheated by Turkey after the Treaty of Sevres (that was giving it Ottoman Armenia that today is part of western Turkey), that’s why it’s such a big issue for Armenia. The NAgorno KArabakh was an AUTONOMOUS ethnic Armenian oblast inside Azerbaijan’s borders during the USSR.

On the other hand, Ajerbaijan wants the land because it’s inside its internationally-recognized borders. (the USSR is at fault there, as it should have created different borders in 1920… but they believed in creating states with mixed nations so that no nationalistic state could exist)

Axpers are greedy for land like all other orthodox christcucks, thieving shitskins. They have nothing to do with that land or any other land.

Until 1750 they alone have been there. Azeris came to dominance just then.

Incorrect. Armenians invaded that region in the 2nd century BC and assimilated the people living there, which hardly makes the land theirs.

They’re little more than common thieves, both historically and contemporarily; store thefts and financial frauds are the main occupations of armenians.

What do you men by “assimilated”? Did they eat the “natives”. Whom those “natives” ate when they arrived?

Assimilated as in they impressed their language and culture upon the conquered and erased their identity.

The people living in Karabakh were descendants of Neolithic farmers and belonged to the Kura-Araxes culture. Guess what, the bulk of these people’s genetic contributions is to Azeris, not axpers.

There was a (mi6/cia) amenicun tidy rich old man who got caught and had its throat slit,not sure by armenian or other but Russia entrusts either to deal with kill peace informant/dogging/problematic soros lovy fools,in respective juristiction,motto of the story you found to me informer for westy/lgbtq? DIE!

ARMENIAN ARE COPTIC CHRISTIAN NOT ORTHODOXY YOU DUMB FLOG!

armenians didn’t invade anything. they delcared independence in 190-188BC from the Seleucd empire who were greeks. natives of the area at that time are described as irano-armenians.

save it for the lgbtq forum fuckwit gutless demonic fagglet mi6 fascist piece of shit,who do you think you are captain septic ewank? How dare you insult heterosexuals fekn POOF! LIKE IT OR LUMP IT YOU SOROS FAGGLET PUNKS DON’T BELONG YOU WILL BE HUNTED! SPROGBREATH! THE BIGGEST THEIFS ARE YOU UNGOLDLY LIEING MOMNGREL BRED PARASITES,AS YOU SEE YOU DON’T HAVE ANY SOLUTIONS TO CIA/SOROS PROBLEMS THE YOUR FKN IT! ASSWIPELGBTQ BOOTLICKING KUNTING GUTLESS FAITHLESS UNGODLY PIECE O SHIT!

And ungodly soros trolls who can’t tell the difference between religions,dumb as any askenazi can get!

The truth shant be mocked,irrespective soros/cia are going down,I stand by my posts,mock the just,the sane the meek,the truth,I boldly pound without relent to feelings as i got no time for problem gay satanic run trolls,exactly why I never answer let alone argue with any low iq degenerate idiot,conversely like it or lump it these days. Russia is well in control not just high demand all over the world too,so it is what it is,THE HOLY WAR,HETEROS VS SODOMITE GIMPS (PERIOD) Which silly little poofters wanna ban farming and tractors for the hard workers? Lest they bear the full brunt of their utter weakness in all avenues to the wrath of the god fearing peoples,FIXED! God Bless Mother Russia and may peace prevail to neighbouring lands,but not untill they themselfs eliminate the satanic globohomo/soros/retardent idiotic world order out from their respective governances for good,amen!