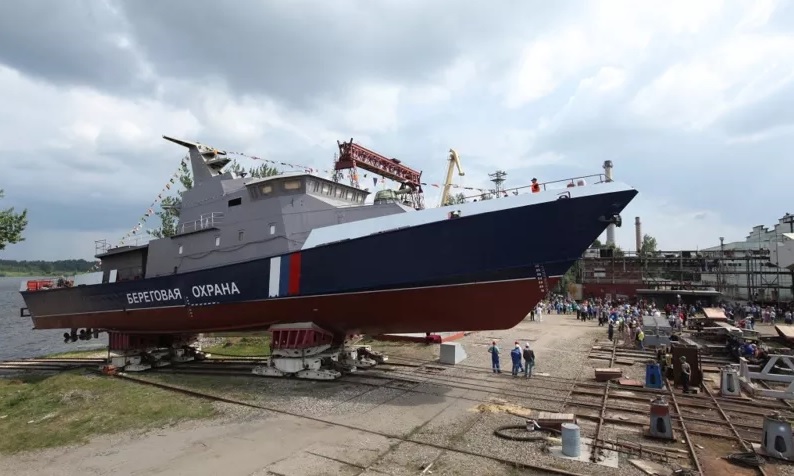 Russia has increased its fleet’s presence in the Sea of Azov recently. Korabel.ru reports that on June 8th, a Svetljak-class (Project 10410) patrol boat, Kerch was put afloat by Russian Almaz Shipbuilding Company. It will be delivered to the coast guard by the end of 2018.

The Federal Security Service (FSB) and the Almaz Shipbuilding Company signed the contract to build Project 10410 in 2016, its keel laying took place on May 24th, 2017.

According to Almaz, Kerch was the third patrol ship put afloat in June, the other two being the Rubin-class patrol boat (Project 22460) and the Purga-class icebreaker patrol ship (Project 22120) who are also set to be delivered to the Russian coast guard by the end of 2018.

As of June 28th, as reported by Jamestown, Russian fleet presence in the Sea of Azov numbers approximately 40 ships, thus allowing it to control the body of water and strike at will along the Ukrainian coastline. The significant boost coincided with the opening of the Kerch Strait Bridge on May 16th of 2018, on top of the continued tensions in the Sea between Ukraine and Russia.

On July 17th, as reported by Unian, Ukrainian President Poroshenko said that Ukraine shall not tolerate the illegal capture of its ships and checks of foreign ones that are heading to Ukrainian ports, he also iterated that capture of the Ukrainian port of Mariupol has always been of significant strategic importance for Russia.

On May 4th, Russian Coast Guard seized Ukrainian fishing vessel YaMK-0041 for illegally fishing flatfish west of Cape Tarkhanku. As Kyivpost reports, Prosecutors of the Autonomous Republic of Crimea, based in Kyiv opened a criminal case, saying that the reason for it is the seizure of the ship and imprisonment of its crew. As July 1st, according to UATV, four sailors of YaMK-0041 were released, however their passports have not been returned. UATV claims that a criminal case has been initiated against the captain for illegal exploitation of biological water resources, and a preventive measure in the form of pre-trial detention was imposed, he is still in jail. He faces a sentence of up to five years in prison.

The rise in tension began on March 25th, when it became evident that the Ukrainian Coast Guard had illegally seized a Russian fishing vessel, Nord, in the territorial waters of Russia. Furthermore, Ukraine rejected any invites to solve the issue via diplomacy, thus in answer the Russian Coast Guard expanded its presence and security operations, which includes actions against illegal fishing of Ukrainian vessels and checks of ships that are heading to Ukrainian ports.

The increase in presence also most likely has the purpose of putting pressure on the Ukrainian leadership in response to the seizure of Nord as well as increasing security measures in the area amid the launch of the Kerch Strait Bridge, which links Crimea and Russian mainland.

Poor Ukraine they aren’t that smart to begin with then they take marching orders from flat earthers?