200 years ago, on September 26, 1815, Austria, Prussia and Russia concluded the Holy Alliance. The ideological inspirer of the Union was Russian emperor Alexander I, who by means of such an agreement planned to eliminate the possibility of military conflicts between the monarchical Christian states. The Holy Alliance, which was concluded after the downfall of Napoleon’s empire, was to prevent the outbreak of a new major war in Europe, maintain the established orders, and suppress revolutionary movements in Europe which could destroy the old world. 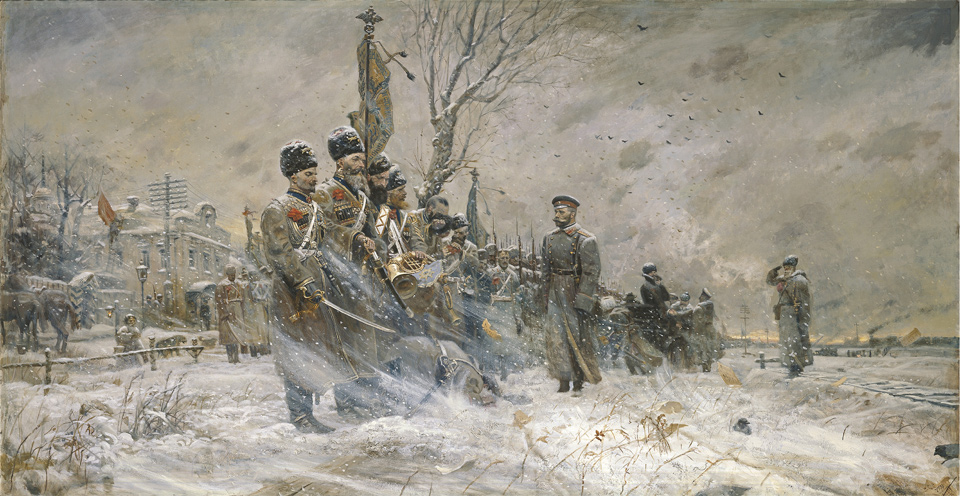 Pavel Ryzhenko: Farewell to the Escort – No. 1 of the Imperial Golgotha triptych

Alexander I, inspired by victory over the French in 1812, created a new coalition and inflicted decisive defeat on Napoleon. On March 31, 1814, the Russian army entered Paris. Alexander I experienced the hour of triumph, and the apogee of greatness, glory, and happiness on that day. He obtained revenge for the shame of Austerlitz, the terrible lesson of Friedland, the humiliation of Tilsit, and the burning of Moscow. Contemporaries called Alexander I the “Tsar of Tsars”, Conqueror of the Antichrist, and Liberator of Europe. The European capitals welcomed with delight the Russian Cossacks and the Tsar-Liberator. Even the population of Paris met him with flowers. The main square of Berlin is named after him — Alexander Platz. 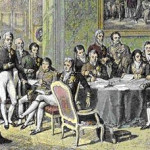 This is not surprising. The Great Patriotic War victories are still remembered in Russia. But almost forgotten are the Russian Empire’s victories and occasional defeats, except the very largest ones. And after all, opposition to France from all of Europe was actually a world war in which the future of the entire world was resolved. At that time, million-man armies faced off on the fields of battle of Europe, Asia, and America, and the question of the future world order was resolved.

In September, 1814 the victorious monarchs gathered at a Congress in Vienna to redistribute a Europe freed from Napoleon. The Congress of Vienna became the most representative in the history of diplomacy: Europe sent there the heads of 216 states, specifically two emperors, five kings and 209 sovereigns of princely rank. However, the two hundred dwarf principalities, duchies, and electorates were marginal participants. All business of the Congress was resolved by the quintet of great powers — Russia, England, Austria, Prussia, and royalist France, which was accepted in their midst. Emperor Alexander I played the leading role in the quintet.

As always happens in a spoils system, Napoleon’s conquerors began to quarrel: Austria with Prussia, because of leadership in Germany and repartition of local territories; Prussia with England, because of Saxony; and all of them with Russia, because of Poland. Petersburg wished to associate the Duchy of Warsaw entirely to itself. “I won the Duchy,” said Alexander I, “— and I have 480,000 soldiers to protect it”. But England, Prussia, and Austria did not wish to strengthen Russia. The affair came to the point that on January 3, 1815 England, Austria and France signed a confidential treaty and prepared the plan for a military campaign against Russia and Prussia. A new major war was planned to begin towards the end of March. Appointed Commander-in-chief of the armies of the three powers was the same prince K. F. Schwarzenberg who fought with Napoleon. Only the “hundred days of Napoleon”, when the French emperor landed with a handful of soldiers in Europe and without one shot took Paris with the enthusiastic greetings of almost all segments of the population of the country, stopped this new global opposition.

The news of Napoleon’s return frightened and rallied the former allies. In fact, Napoleon’s action stopped a major war of the European powers against Russia. The enemies of Russia were frightened, and Napoleon terrified them. They feared his glory, since the masses of people followed him. They all forgot at once about conflicts (or more accurately, postponed them for later) and remembered the Russian bayonets. The Great Powers declared Napoleon “the enemy of mankind” and created the 7th anti-Napoleonic coalition. This time they managed to crush Napoleon without the participation of Russian troops.

The Congress of Vienna completed its work shortly before Waterloo. Its final act was signed on June 9, 1815. Russia gained the greater part of the Duchy of Warsaw under the name “Kingdom of Poland”. In the same year, 1815, Alexander I granted to the Kingdom of Poland a constitution and autonomy as a part of the Russian Empire, even though Russia itself had no such rights and freedoms. Later the polish elite “showed their gratitude” to Russia with a series of revolts. Austria and Prussia divided between themselves the rest of the Warsaw Duchy and acquired rich lands: Austria in Italy, and Prussia in Saxony. England secured for Malta, the Ionian Islands, and a number of French colonies. France returned to the boundaries of 1792. But they did not take reparations. Alexander refused reparations from the drained and humiliated country. The Allies were forced to obey the will of the Russian Tsar, and in turn renounced reparations. Monarchs dethroned by the French revolution and Napoleon returned to the throne of France, as well as on other European thrones (Spain, Piedmont, Roman region, Naples, and German principalities),.

Thus, the Vienna congress closed the books on the major war which had lasted nearly two decades, and restored the feudal and absolutist orders in Europe. And created the Holy Alliance so that there would be “order” in Europe,.

It is generally fans of history that remember that in revolutionary France an experiment had been conducted in creating a center of total ideology that was anti-Christian and theomachist in its essence – that same ideology which now dominates in Europe, and has led it to complete degradation and to the edge of the death of European civilization and the white race as a whole.

Masons and Illuminati (“the global cabal”, the supranational structures of that time) were then already preparing the design of the New World Order. For the first time war was preceded by promotion of secret sects and mass psychological processing of the population. The Enlightened Ones – Illuminati worked without stop, creating a driven chaos which would lead to a new world order in Europe, and then the whole world. The century of education ended with revolution, the guillotine, bloody terror, and world war. Some of the European intellectuals welcomed Napoleon as a new Messiah who would make revolution worldwide and unite all peoples under his rule.

A revolution must annihilate the old world, and destroy monarchies and religions. Not for nothing did the Most Holy Synod of Russian Orthodox Church in 1806 anathematize Napoleon for his persecutions of the church. In all temples of the Russian Empire (Orthodox and Catholic) Napoleon was declared to be an Antichrist and «the enemy of the human race».

However, the architects of the new global order were clearly rushing (or else this was a trial balloon). First, the monarchic and aristocratic system had not yet become obsolete, especially in Austria, Prussia and Russia. It still had development potential. Second, Napoleon was not a weak-willed puppet. In fact, in France there was a restoration of the monarchy. Napoleon acquired a taste for monarchy, created a new dynasty, and curtailed the most dangerous revolutionary reforms. Napoleon rejected world revolution and therefore “wrote it off”. Third, Russia stood in the way of the architects of the new world order. F. Engels later noted quite correctly: “World revolution will be impossible, as long as Russia exists”.

Alexander took another path. He rose to the defense of legitimacy and traditional monarchy. Russia freed Europe, and Russian Cossacks entered Paris. Alexander acted as an idealist. He spoke at the Congress of Vienna about his remarkable proposal to construct a new Europe on the basis of evangelical principles. In Vienna Tsar Alexander provided a definition of the rights of peoples: they must be based upon the precepts of Holy Scripture. In Austria, the Russian Tsar suggested to all monarchs and governments of Europe to reject national egoism and Machiavellism in foreign policy, and sign the Charter of the Holy Alliance.

It is clear that this was idealism. But nobody dared to act against it, as also against the conqueror of Napoleon. The charter of the Holy Alliance was signed by participants of the Congress on September 26, 1815. The text was compiled personally by Emperor Alexander and only slightly corrected by the Austrian emperor and the Prussian king. Three monarchs representing three Christian branches: Orthodoxy (Russia), Catholicism (Austria) and Protestantism (Prussia), addressed the world in the preamble: “Solemnly do we declare that the present act has no other purpose than our desire before the whole world to show our unshakable intention to choose as a rule — both in interior administration of the states, and in the relations with other governments – the precepts of our Holy religion: the precepts of righteousness, love, and peaceful disposition, which are observed not only in private life, but must direct the policy of sovereigns, being the only means for strengthening human institutions and correcting their imperfection”.

Between 1815 and 1818, the Charter of the Holy Alliance was signed by fifty states. Up until the death of Alexander I in 1825, the heads of European governments gathered at congresses to coordinate their policy. England supported the Union externally, but stood aside. This Union destroyed the plans of the Anglo-Saxons.

Thus, the sacrifices of Russia in the war against Napoleon and revolution allowed Europe to live several decades in relative peace. Over a span of forty years, from 1815 to 1855, Europe did not know serious wars. Metropolitan Philaret of Moscow spoke about the role of Russia in the world: “The historical mission of Russia is the strengthening of the moral order in Europe on the basis of evangelical precepts”. In essence, he was right. The historical mission of Russian civilization on the planet is to maintain the ethics of conscience, participate in the Higher (Divine) plan, and build up a society of service and creation, where a person is the steward of God on Earth, instead of a biped animal satisfying his own lusts.