Russia and the US want to bring about surprisingly unanimous a ceasefire in Syria. A meeting of foreign minister Kerry and President Putin brought significant progress. Whether the two great powers will succeed, however to curb the various terrorist groups and armed regional powers, is another question. 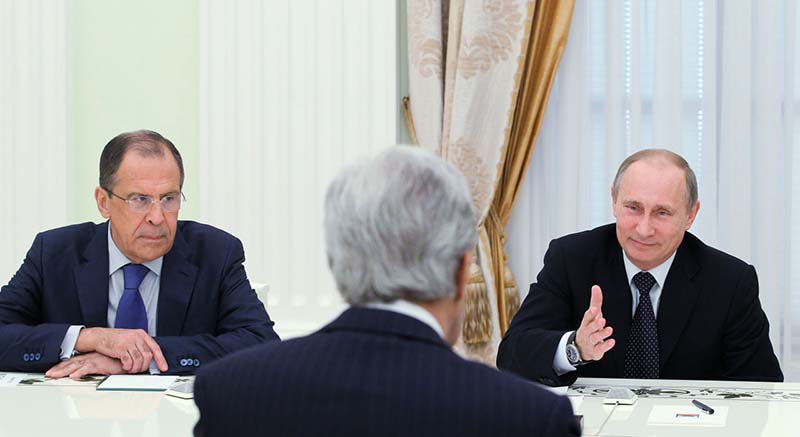 The US and Russia have surprisingly unanimous paved the way for a new approach to a political solution in the Syrian conflict. The long hold in abeyance next international conference on Syria will be held this Friday in New York, said US Secretary of State John Kerry on Tuesday after talks in Moscow with his Russian counterpart Sergei Lavrov and President Vladimir Putin. Subsequently, a UN resolution should be adopted, that negotiations and “hopefully a ceasefire” contains. Lavrov confirmed that Russia was behind the meeting. “Despite the differences of our countries, we have shown that progress can be made when the United States and Russia cooperate.”

A long time it was unclear whether the meeting in New York will ever come about. Because the Russians had made it clear that there must be first a common understanding, who is to qualify as a terrorist group in the region and who is part of the opposition. Now here is where the meeting brought the amazing agreement that in addition to the IS now the al Qaeda branch al-Nusra Front represents a terrorist group. The United States and Turkey had until now fought on the side of al-Nusra.

The at least formal renunciation of the United States from al-Nusra is also related to US President Barack Obama signaling some time ago, that maintaining the overthrow of Syrian President Bashar al-Assad is no longer the main aim of the war. The alliance with al-Nusra was exclusively for the purpose of the disempowerment of Assad. Now, the United States argues that Assad does not have to resign until a transition phase starts. Russia, which along with Iran is a key ally of Assad, has always insisted that only the Syrian people and not foreign powers should decide on Assad’s future.

Kerry said at the meeting in Moscow they had not focused on Assad’s role, but on the political process. They did get closer about the question of which rebel groups should participate in the peace process and which shouldn’t. There was an agreement that the radical IS militia and the al-Nusra Front were not allowed to attend the peace process talks.

The meeting in New York followed the Vienna Conference, in which the United States, Russia, the EU and regional powers in mid-November had agreed on a roadmap for a political solution.

The agreement is an important step on the way to a truce. However, it is not clear whether the major powers have control over the regional powers, not even mentioning the terrorist groups. Especially Saudi Arabia is unpredictable: The Saudis have on Monday announced to lead an Islamic military alliance in the region to fight in Syria and Iraq. In fact, the further development in the Middle East could provide evidence of whether the Americans are still able to give geopolitical instructions to the Saudis. Russia is likely to have it a little easier here: Putin had before the Russian military intervention concluded alliances with Iran and Iraq.

Even with Turkey Putin is trying to come back to an orderly relation. Thus, Turkey has allowed the Russians to use Turkish airspace for reconnaissance flights. At the same time, the Kremlin has distanced itself in an unusually sharp manner from the anti-Turkish riots in Moscow.