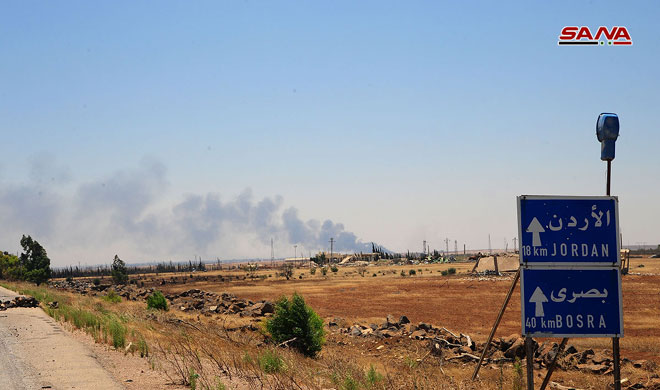 On July 6, the US-backed Free Syrian Army (FSA) and Russia reached an initial agreement on southern Syria during a meeting in the town of Bosra al-Sham, according to the Syrian new outlet Enab Baladi.

Under the agreement, the FSA will hand over its weapons to the Syrian Arab Army (SAA) and withdraw to the opposition-held areas in northern Syria along with radical fighters of Hay’at Tahrir al-Sham (HTS) and the Ahrar al-Sham Movement.

In return, the SAA will withdraw from the recently liberated towns of al-Musayfirah, al-Jizah, Kahil and Shawat al-Qamh. The SAA will be replaced by units of the Russian Military Police and later by the Syrian Police, in a similar way to what happened in the northern Homs countryside.

The pro-opposition outlet said that the militants of the western Daraa countryside and al-Qunitar have not approved the agreement yet. These areas are well known for hosting hundreds of HTS fighters, due to this they will likely reject this peaceful solution.

The Russian Center for the Reconciliation of Opposing Sides in Syria and the Damascus government will likely confirm the agreement and release new details about it in the upcoming hours.

To bad they might be allowed to evacuate. Kill or capture after unconditional surrender would be better. Nevertheless SW Syria will be liberated soon. Victory to SAA and allies!!

No they are using the green buses so foreigners and Al Qaeda/ISIS and rebels not reconciling will be bused to Idlib, now the district of al Balad in Daraa to secure this side and border crossing 28% left in region 6% in ISIS control the rest FSA Terrorists.

Slowly but surely the Zionist Isis puppets are being driven out of Syria.

if this becomes true…. a quaranted new uprise of terrorists is for sure….regroup,rearm,reorganize…what a crazy agreement…giving up the villages and towns that are terrorist infected, all SAA army troops leaving the area, replaced by russian police men, later by syria police force….that last one gives it away.”later syrian police force will enter the area”…..where is the difference??wanna be saveand have peace again, where is the difference…the only difference is the timing…..ALL syrian government forces have to leave the area now….replaced by non arab speaking russian police men…what a joke…..they (the terrorist forces of the jews) are buying time…and russia is allowing it…….they are cornered in, they chose their path of death and destruction and war, so be it…kill them….if you let them leave…you´ll have to fight them on a different battlefront on a different day…..the SAA has the upper hand now…even without any agreenment s.syria would be liberated anyway at very little SAA life cost, the last days showed the difference in fire power…its overwhelming by the SAA…so why choose to leave the area, give security to a foreign nation which do neither speak the language of the people living there, or know of their social habits…which leaves a HUGE door open for reorganizing, regrouping for future terrorist activities….i mean thats logical….I´ve never heard of any war where the by far stronger national state force, signs an agreement, shortly before full 100% victory on the battleground is achieved , and the national state stronger force accepts leaving the just liberated area to exactly those people, may they be foreign or native, that fought in the most brutal way against the government for years, making deals and agreemnts with all different foreign governments.

But then again…maybe assad is saving this for later…hunting down the rats…….to the more imporatant strategic Quinetra area and the possible showdown with israel.

Idlib has over 400,000 terrorists head choppers already….no need to go any higher…..southern syria would be liberated anyway…the cost of SAA human life would be at a minimum here and probably higher once the war in idlib starts to kill those that you have corned in now anyway. The real danger lies in the Quinetra area…thats where the terrorists have a great retreating area…the demilitarized military zone….israels buffer zone…