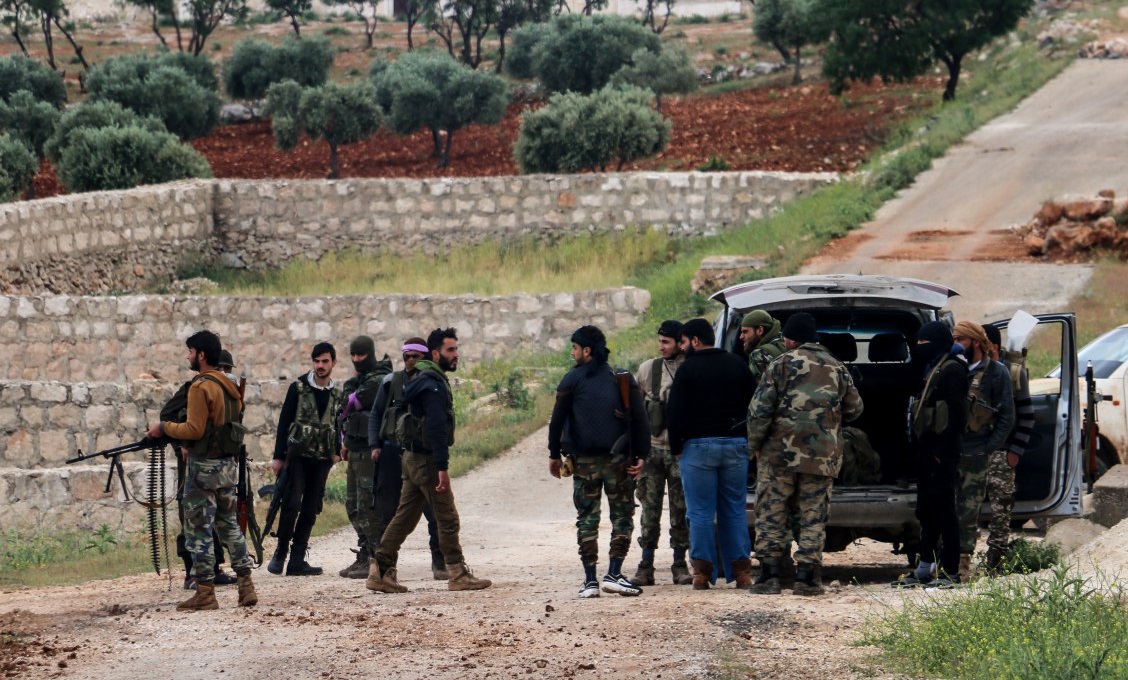 SLF fighters before the attack on HTS

Russian officials and commanders of the Free Syrian Army (FSA) failed to reach an agreement on southern Syria during a recent meeting, which was held in the town of Bosra al-Sham in the eastern Daraa countryside, the Syrian pro-opposition news outlet Enab Baladi reported on June 30.

Abu Shaima, a spokesman for the FSA operations room “al-Buniyan al-Marsus,” told Enab Baladi that the Russian delegation insisted during the negotiation that the FSA should surrender to the Syrian Arab Army (SAA). The Russian side didn’t even offer an evacuation agreement to the FSA, according to Abu Shaima.

The Hammurabi’s Justice News blog, which is linked to the US-led coalition and the FSA, reported that a new round of negotiation will be held on July 1. According to the pro-opposition blog, Russia will bring a new offer to the table in the upcoming round.

The FSA will likely accept any Russian offer that would allow it to withdraw to the opposition-held areas in northern Syria. Previously, similar evacuation deals were successfully implemented in the governorates of Homs, Damascus and Aleppo.

It might be time to make an example of those who betray their country for yankee dollars?

cowboys! the best way to get revenge for the uss liberty is to make sure golan heigts is returned to syria! revenge for 911, would be the wholesale slaughter of neocons and ziochitss…….

keeep the numbers around 3000 to stay fair, but do make sure all the rest die of cancer. cheers!

A UK-based monitor says eight militant-held towns in Syria’s southwest agreed to reconcile with the government. According to the Syrian Observatory for Human Rights, the towns are in Dara’a province. The reconciliation deals were brokered by Russia. Syria’s media broadcast live images from one of the liberated towns. The two provinces of Dara’a and Quneitra are mostly controlled by foreign-backed militants. The army has pledged to free all those areas and the rest of Syria.

No, the reports are right. The towns that have already agreed to reconcile are not up for negotiations. The jihadi FSA fled west and east. That is what they are discussing, a full surrender. The FSA just claimed that they re captured 6 towns but turns out that was lies as per usual and visual confirmation to several sources confirms with photos.

I don’t get why Russia didn’t offer the green buses instantly and sped this up?

It seems that Russians see FSA position as very weak and green bus option is lifted. Now they can choose die or surrender to SAA.

They thought the israeli would give them over… HAHAHA!!!

They are so stupid I almost pity them!

While you’re probably right, I have to note Snowglobe has a point. These articles are very often confused or downright self contradictory, at least on the surface. Also, they are full of typing errors (like “ground” instead of “group”, “as” instead of “ask”, etc.). They are most likely summaries of other articles, roughly translated to English, and that doesn’t help either that the transliteration of Arabic names is frequently inconsistent, sometimes even inside an article.

propagandist quoting another propagandist. please ignore, or file a complaint with the police for being accomplices to war crimes. sohr should be in jail!

Maybe Russia didn’t offer FSA an evacuation agreement because it is in Russia’s and coalition best interest that they all die.

“No green bus mister R-rr-ussian? How come… We thought there will be free bus tour. Surrender?” Than he shauts that true warriors never surrender and they end round 1 of negotiations. Tomorrow will be some more airstrikes to represent options other than surrender. I will think that “freedom fighters” that at a closer look are nothing other than head choppers will soon realize that they have been badly used (as a condom) but Greater Israel still didn’t happen.

When the time comes Russia should turn Idlib into a big glass parking lot.

The general who would move his enemies into a better position would be a fool. These fools thought they would hitch a free ride.

These clowns don’t want to go to the area designated for ‘the last battle’ or The Killing Field. I suggest that they all cut off their trigger fingers (including the one below the belt, then .. maybe (get gay tuck).

Better ro give them busses and to not risk that israeli forex will back the up if a fight will accour. Saa and the russians can deal with them in idlib later witout anny support from the israeli army