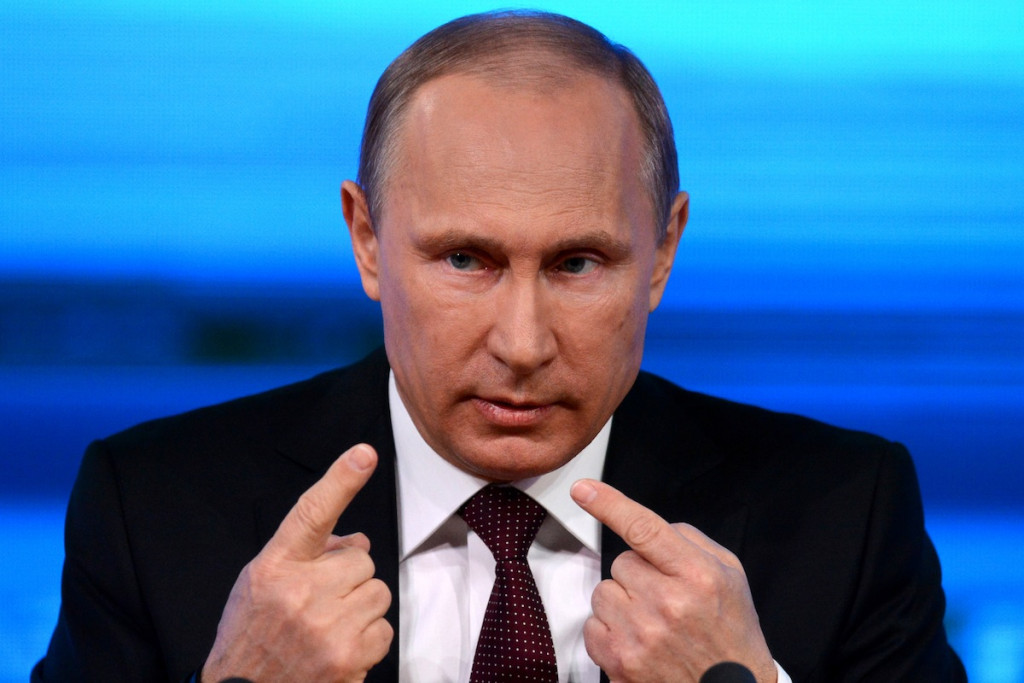 Original published by TASS; translated from Russian by J.Hawk

President Vladimir Putin signed a decree adopting the new Russian Federation National Security Strategy. The corresponding document was placed on the official legal information portal. The new edition of the Strategy, prepared by the RF Security Council includes means of fighting against radicalism and terrorism.

Russian Federation’s national priority is consolidating its position as one of the leading world powers.  The long-term national interests are: “…consolidating Russian Federation’s status as one of the leading world powers, whose actions are aimed at ensuring strategic stability and mutually beneficial partnerships in the context of a multi-polar world,” the document states. When it comes to national priorities, it emphasizes strengthening the country’s defenses, protecting its constitutional system, sovereignty and territorial integrity, strengthening the national consensus, raising the quality of life, preserving and developing culture, improving economic competitiveness, and other principles of national security. Strategic tasks listed in the document include ensuring food security through “ensuring Russia’s food independence.” In addition, it calls for accelerated development of Russia’s agriculture, increasing the effectiveness of government support for agribusiness, preventing uncontrolled traffic of GMO foods, and also training highly prepared specialists for the agricultural sector.

The Use of Military Force

The documents allows for military force to be used only if non-violent approaches prove ineffective. “Strategic deterrence and military conflict prevention is accomplished through the preservation of the strategic deterrent potential at a sufficient level, and through ensuring the specified level of combat readiness in the Armed Forces of the Russian Federation, other forces and military formations,” the Strategy notes.

In view of the global economic imbalance, there is a high risk of financial/economic crisis re-occurrence. “Against the background of structural imbalances in the global economy and the financial system, the growth of sovereign debt, and energy market volatility, the risk of a repeated major financial and economic crisis remains high,” the document states. “The growing influence of political factors on economic processes, as well as individual countries’ attempts to use economic methods, financial, trade, investment, and technology policies to achieve their geopolitical objectives weakens the resilience of the international economic system,” the Strategy emphasizes. The document calls for strengthening the financial system, ensuring a stable ruble exchange rate, and reducing interest rates.

One of the RF national priorities is achieving food independence. The document states that food security will be achieved through “achieving Russian Federation’s food independence.” Moreover, the documents implies accelerated development of the agricultural sector, increasing the effectiveness of state support for agribusiness, preventing uncontrolled trade in GMO foods, and preparing highly qualified specialists for the agricultural sector. At the same time, the sanctions introduced against Russia are hurting its economic security.

The main strategic threats to national security in the economic realm are the low competitiveness, the reliance on raw materials exports, and high dependence on the international economic situation. “Negative influences on the country’s economic security include economic restrictions introduced against the Russian Federation, global and regional economic crises, the growth of dishonest competition, unlawful use of legal instruments, unstable provision of heat and energy to the subjects of national economy, and in the future also shortages of mineral, raw material, water, and biological resources,” the document states.

Other economic threats listed in the document include lagging in development futuristic technologies, vulnerability of the financial system, budget system imbalance, the offshorization of the economy, the exhaustion of natural resources, the high share of the “shadow economy” in the country’s economy as a whole, conditions favoring corruption and criminalization, and uneven regional development.

Improving the effectiveness of governmental direction over the fuel and energy industry is a necessary condition for ensuring Russia’s energy security. “The necessary conditions for ensuring energy security include increasing the effectiveness of state control over the energy and fuel industry, reliability and constancy of delivering energy resources to end users, ensuring the country’s technological sovereignty on the world energy market…”, the document states.

Developing relations with CIS countries, Abkhazia and South Ossetia is a major focus of Russia’s foreign policy, according to the Strategy. “Developing bilateral and multilateral cooperation with CIS member states, Abkhazia and South Ossetia, is one of the key directions of foreign policy,” the document states. The Strategy also emphasizes the importance of relations with China, India, and notes its importance for Latin American countries and Africa. The relationship with PRC is viewed “as a key factor in preserving global and regional stability.” Russia also assigns “a major role to the privileged cooperation with India.” It is also noted that Russia is developing political, trade, and military-technical cooperation with Latin American countries, Africa, and regional organizations in which these countries participate. Humanitarian and educational contacts are also being maintained.

The Role of Special Services

Special services are playing an increasingly active role in the battle over international influence, according to the Strategy. “The struggle for influence in the international arena involves the whole range of political, financial/economic, and information instruments. The potential of secret services is being utilized more actively,” the document notes. “The process of forming a new polycentric world order is accompanied by the rise in global and regional instability. Conflicts are escalating due to the uneven global development and the growing differences between various countries level of well-being, the struggle over resources and market access, control over trade routes,” the Strategy states. “Competition between states is being extended to values and societal development models, human, technological, and scientific potential,” the document notes.

Partnership with the US

Russia’s independent policies are provoking resistance from the US and its allies, the decree states. “Russia’s strengthening is occurring against the background of new threats to national security which have a complex and interdependent nature. Russian Federation’s independent internal and foreign policy is causing counter-actions by the US and its allies which are seeking to preserve their dominance in global affairs,” the document states.

Nevertheless, Russia is in favor of strengthening cooperation with the EU and a fully-fledged partnership with the US. “Russian Federation is in favor of strengthening mutually beneficial cooperation with European countries and the EU, and of harmonizing the integration projects in Europe and in the post-Soviet space, forming an open collective security system based on a clear legal and treaty framework and covering the Euro-Atlantic region,” the document states. “The Russian Federation is interested in building a fully-fledged partnership with the United States of America on the basis of common interests, including economic, with an eye on the Russian-US relations’ key influence on the international situation as a whole. The most important aspects of such a partnership are perfecting control mechanisms over armaments specified by international treaties, strengthening mutual trust measures, resolving issues related to WMD nonproliferation, expanding counter-terrorism cooperation, resolving regional conflicts,” the text states.

The expansion of NATO and its approach to Russia’s borders creates a threat to national security, according to the document. “Expanding the force potential of NATO and endowing it with global functions which are implemented in violation of international law norms, the block’s military activization, its continued expansion, the approach of its military infrastructure to Russian borders, all create a threat to national security,” states the updated Strategy.

At the same time, Russia is ready to expand its relations with NATO provided the alliance gives due consideration to Russia’s interests. “The Russian Federation is ready to develop its relationship with NATO on the basis of equality in order to strengthen the overall security in the Euro-Atlantic region,” the document states. The Strategy notes that the determining factor in the relationship with NATO is “the unacceptability to Russia of the growing military activity by the alliance and the approach of its military infrastructure to Russia’s borders.”

It is emphasized that Russia is interested in establishing a fully-fledged partnership with the US “on the basis of common interests, including economic, with an eye on the Russian-US relations’ key influence on the international situation as a whole.”

Inspiring “color revolutions” is one of the main threats to Russia’s security, the document states. It notes that regions neighboring Russia are characterized by growing militarization and arms races. “The role of force in international relations remains high. The efforts to increase and modernize offensive armaments, creating and deploying new types of weapons weakens the global security system and also the network of treaties and agreements dealing with arms control.”

The most important threats to Russia’s state and societal security is “the activity of radical societal groups and organizations which are using nationalist and extremist religious ideology, of foreign and international NGOs and financial and economic organizations, as well as private individuals, aimed at undermining the unity and territorial integrity of the Russian Federation, destabilizing the political and social situation inside the country, including through inspiring “color revolutions” and destroying traditional Russian spiritual and moral values.”

The document notes that the practice of overthrowing of legitimate political regimes is becoming more widespread. “The practice of overthrowing legitimate political regimes, provoking internal instability and conflict, is becoming more widespread. In addition to the still existing areas of instability in the Middle and Far East, in Africa, South Asia, and the Korean Peninsula, new “hot spots” have appeared and the territory not controlled by any government authority has expanded.”

The Schism in the Ukrainian Society

US and EU support for the coup in Ukraine led to a split in Ukraine’s society. “US and EU support for the anti-constitutional coup d’etat in Ukraine led to a deep schism in the Ukrainian society and an armed conflict.” The document notes that the West’s effort to counter the integration processes and to create hot spots in the Eurasian region is having a negative influence on the pursuit of Russian national interests.

“The consolidation of an extreme right nationalist ideology, the deliberate effort to create a public image of Russia as an enemy…is turning Ukraine into a long-term source of European instability located right next to Russia’s borders,” the document emphasizes.

The US military-biological lab network

The Strategy states the US is expanding its network of military-biological laboratories on the territory of countries neighboring Russia. The document points out that the world still faces a high risk of proliferation and use of chemical weapons, “and also the uncertainty as to which foreign countries have biological weapons or the means to develop and produce it.” There is also the danger that the number of nuclear weapons states will increase. Countries with unstable internal situation run a high risk of conventional weapons falling into terrorist hands, and the “physical protection of dangerous objects and materials” is in a critical state.

“The still-evident block approach to resolving international problems is not facilitating the response to a whole range of challenges and threats. The growth of migration from Africa and Middle East to Europe revealed the bankruptcy of the regional system of security in the Euro-Atlantic region that was built on the basis of NATO and the EU.”

The RF Security Council Secretary Nikolai Patrushev earlier said that the document included the ways of preventing the spread of radical ideology and its propaganda in mass media, and emphasized the importance of increasing the level of protection of critical infrastructure, key individuals, society, and the state as a whole against terrorist threats. According to Patrushev, the document openly states that spread of terrorism, extremism, inter-religious and inter-ethnic enmity was facilitated by the practice of overthrowing legitimate regimes using the “color revolution” and “hybrid war” methods. “The appearance and consolidation of the influence by the terrorist organization which names itself the Islamic State is the result of the policy of double standards which is pursued by some countries in the realm of fighting terrorism,” Patrushev emphasized. “The result of such irresponsible actions was the prolonged instability in Afghanistan, Iraq, Libya, the war in Syria, widespread proliferation of weapons, organized crime, drug trafficking, and systematic violations of rights and freedoms of millions of people.”