The Russian Foreign Ministry believes that an idea about voting in the UN Security Council on introduction of sanctions against a number of Syrian physical and legal persons was frankly provocative. 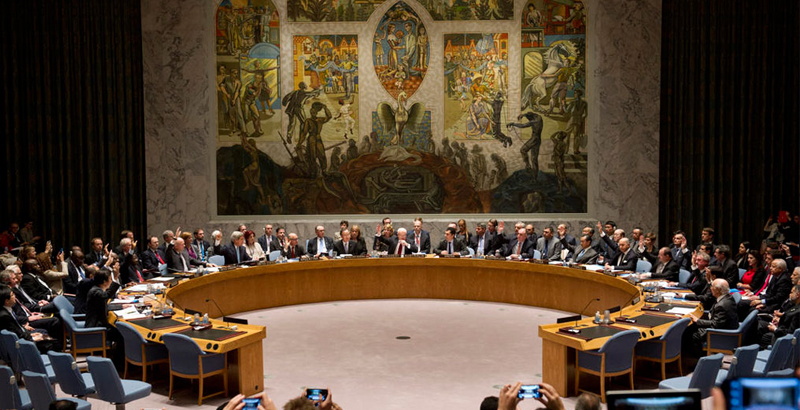 A wave of hysteria about the fact of the Russia’s usage of veto against the UN Security Council’s draft resolution on Syria swept Western media.

Director of the Department for Non-proliferation and Control of Arms of the Russian Foreign Ministry, Mikhail Ulyanov, gave a detailed explanation of the Russia’s position and expressed his opinion on the latest wave of the anti-Russian hysteria in the mainstream media.

According to Ulyanov, all this idea about voting in the UN Security Council was frankly provocative. As it turned out, the draft resolution on introduction of sanctions against a number of Syrian physical and legal persons was prepared in early December, but its Western co-authors abstained from voting at that time. They did this only in late February, precisely when the negotiations on a peaceful settlement were resumed in Geneva.

“We drew the attention of our Western colleagues to the fact that such a move can have a very negative impact on the search for political solutions. Our concerns were completely ignored. In this way, it was a enough conscious step, which political consequences did not worry the resolution’s initiators at all,” Ulyanov noted.

The problem is that any convincing proofs of the guilt of Damascus and its representatives were not provided. The draft resolution’s appendix contained a list of names of officials and organizations, in respect of which it was proposed to impose sanctions. But these lists were literally ‘picked out of nose’. The mentioned individuals and organizations did not figure in reports of the Organisation for the Prohibition of Chemical Weapons (OPCW)-UN Joint Investigative Mechanism at all. There was no response to requests to provide evidences of the fact that they were responsible for the usage of chemical substances for military purposes.

Ulyanov noted that this line of a number of Western countries has nothing to do with international justice. According to him, it was rather an attempt of a ‘kangaroo court’, based on unfit means and executed extremely unprofessional. The official said that to see this, it is enough to take a look at the draft of sanction’s lists. It includes high-ranking military and heads of scientific centers.

“In this way, [they] seriously offered to believe that highly qualified Syrian scientists and generals are personally responsible for production and usage of chlorine and manganese for military purposes,” Ulyanov pointed out.

“All this together gave us a reason to regard the idea about voting as a continuation of the unscrupulous political games, aimed to remove the current government of Syria from power at any costs,” he added.

Ulyanov stressed that usage of the veto in the UN Security Council is an extreme measure, which has to be taken, when there is no other choice. A decision to vote against needs a political will and an increased sense of responsibility, which not everyone has in the modern world.

“For this reason, when some Western partners or media try to make any claims in this regard, we do not have a slightest reason for embarrassment and discomfort. In contrast, there is every reason to feel proud for your country, which is capable to resolutely resist such disgraceful things, despite all-powerful information and propaganda campaigns,” Ulyanov concluded.

It’s a 37 page report and sounds awful, I gave it a quick read and will have to re-read it. The section on blaming the Syrian air force for the convoy attack sounded convincing, payback for Deir Ezzor? However, I am open minded.

Yes, this was Kabuki theater at the U.N. they neglect to mention that China joined with Russia for the veto and while they whine about Russia’s veto power why not mention that Britain and France are basically two automatic votes for the U.S. Why not just give the U.S. three votes?

While some of the UN reports I’ve read are more balanced than the Amnesty International or Human Rights Watch, I found the UN report you referenced abysmal.

“The section on blaming the Syrian air force for the convoy attack sounded convincing”. Supposedly the convoy was attacked with multiple barrel bombs and then strafed with bullets to kill civilians. This was the story as originally reported by the White Helmets.

Have you ever seen video of a Syrian barrel bomb? It is equivalent to a 1,000 kg bomb. In other words, huge. The most destroyed convoy truck shown is burnt but still upright. No way this was hit by a barrel bomb. There should have been a crater and the trucks should have been pushed over and mangled by such a blast. And why would Syria, who was under intense western propaganda at the time openly destroy such a visible target. Makes absolutely no sense.

The purported chlorine laced barrel bomb makes no technical sense. For a chlorine bomb to be effective you want to have the greatest concentration of the chlorine gas close to the ground as possible. Using a barrel bomb with its heat and blast is totally counterproductive as it pushes all the air and gases upward and outward away from people. Without a high enough concentration of chlorine gas it is no longer toxic. I didn’t see any mention of the chlorine gas shells used by the opposition in the last fight to break the siege of east Aleppo. This was well documented by both Syria and the Russians.

This was the least convincing report from the UN I’ve seen, and the timing is obviously intended to interrupt the Geneva peace process. Luckily nobody is falling for this poorly researched propaganda. It shows that the technique used by all these agencies of first, not having anybody of their own staff on the ground at or shortly after the event, but relying on whomever via Skype, etc. and then looking at satellite photos is worthless.

Fair enough, I don’t buy the chlorine gas attack allegations either. If they found any physical evidence, it could even have been from the Jihadis workshops because they know that the west will always blame Assad and Chlorine is easy to come by.

I’m agnostic regarding the air attack on the convoy. 1. I agree with you about the few photos we saw released by the bad guys, however, the UN got access to the area and satellite info. Maybe, just maybe they got a better perspective.

2. Their timeline of the attack seemed convincing, surely there were some actual survivors of the Red Crescent who were operating the Convoy (not Jihadis), they don’t have a motive to lie. Or were they all killed? If all of the Red Crescent guys were killed then I’d call it a false flag.

I hate reading these reports, but here goes. On the convoy there are large discrepancies between the White Helmet video (if you look you can find it on the net) and the eye witnesses and it makes no sense.

“Accounts from survivors and others present in the vicinity consistently described the attack as comprising three stages. First, helicopters dropped barrel bombs, which struck the warehouse and a family home nearby. Immediately thereafter, people rushed to the scene to assist the wounded, but were forced to retreat and seek cover when the helicopters returned and dropped a second round of barrel bombs (see annex I, para. 49). Subsequently, planes, described by several witnesses as Sukhoi jets, carried out attacks, killing several aid workers. Lastly, the aircraft fired machine guns at survivors.”

All those barrel bombs, including on a family home and only wounded? I’m assuming that after all the barrel bombs dropped the jets delivered the following:

86. The munitions employed were particularly appropriate for attacking unarmoured vehicles and individuals. Photographs provided by witnesses indicate that several S-5CB unguided air-to-surface anti-personnel rockets produced in the Soviet Union, at least one RBK-500 series air-delivered cluster bomb carrying hundreds of sub-munitions, and at least two OFAB 250-270 unguided aerial bombs were used. The Syrian air force possesses all of these weapons in its arsenal. S-5CB rockets, loaded with flechettes, are intended for use against soft-skinned vehicles and personnel.

Are they saying there were 8 (this is the number given by the White Helmets in their video) barrel bombs dropped by helicopters and then all of the above by the jet? And all we see is a burned out truck, very much intact. And the S-5Bs and OFAB are unguided but are being used at night? Highly unlikely. If the jets were also dropping munitions why wasn’t that mentioned by the White Helmets in their video? Too many discrepancies between the eye witnesses.

And since everything after the attack was video taped, where were the shots of all the dead people in the streets that took a day to clean up?

None of it makes sense.

Also, at first it was reported that Red Crescent and Red Cross people were killed but then most of that was retracted. Not sure who was killed (if anyone) as neither the eye witnesses nor the victims are named. There isn’t even an actual number of fatalities, just “several”.

When one sees the statesmanship of Russian leaders and diplomats and compare it with the brawling and bullying tactics of the US, UK and France, one must conclude that peace in the world depends almost solely on Russia and its political, diplomatic and military capacity to stop the uncontrolled Western countries. I must confess that my security, and the security of my country, now depend totally on Russia and not on the warmongering NATO.