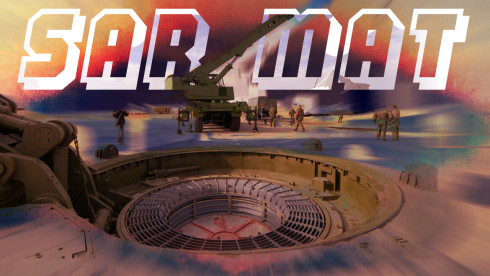 The yield carried by a single RS-28 missile is up to 750 times greater than that of the Hiroshima bomb.

April 20th, 2022, Plesetsk Cosmodrome and Russian military ICBM test base. The first official test of the RS-28 “Sarmat” ICBM (intercontinental ballistic missile) conducted by the Strategic Missile Forces of the Russian Federation. Much of the information about this terrifying weapon is secret, but enough of it is publicly available and confirmed by the authorities, while we can also draw our own conclusions from the available information.

First, we should note the staggering size of the missile, weighing over 208 tonnes. The missile will replace the legendary R-36M2 “Voevoda”, better known by its menacing NATO reporting name SS-18 “Satan”. NATO reporting name for RS-28 has not yet been confirmed, but various informed sources use the designation SS-X-30 “Satan 2”.

The missile’s range is officially stated to be 18,000 km. However, this only applies to the missile with a basic MIRV (multiple independently-targetable re-entry vehicles) payload. However, according to the Pentagon, RS-28 can also use a delivery method they call FOBS (Fractional Orbital Bombardment System). This technology increases the range to over 35,000 km. Going beyond this range would be considered a violation of the 1967 Outer Space Treaty (OST). However, the range is limited only by the goodwill of the party controlling the warheads. If it wanted to, Russia could violate OST and continue the movement of warheads in full orbital trajectory, which would make the warheads’ range unlimited.

The reason why Russia retains this capability is the US’s tendency to openly violate, arbitrarily interpret or simply withdraw from existing arms control agreements. Since 1991, the US has unilaterally withdrawn from at least half a dozen previous arms control agreements except the New START, which the US extended to 2026, but only after facing almost universal international pressure to do so. The US has repeatedly stated it would reconsider its stance on the Outer Space Treaty and the first step towards this was made in 2019 when the US Space Force was officially formed. Another good example of US violations is the refusal to confirm that its pilotless spaceplane X-37B does not carry any weapons, which would be a direct violation of the OST. 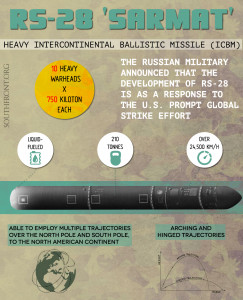 Thus, Russia reserves the right to use its more than half-century-old experience in deploying technologies such as FOBS, which was started in 1962, then first tested in 1965 on a specially modified R-36ORB missile. This technology was so ahead of its time that the Chinese successfully tested their version of this system only last year (2021), while the United States never managed to achieve anything similar. Precisely this Russian technology is the reason behind US’s insistence on the 1967 Outer Space Treaty.

A range of heavy and light MIRV warhead types have been developed for the RS-28. The missile can carry 10-15 heavy warheads or 20+ light warheads. The destructive power of heavy warheads is stated to be 750 kilotons (Kt) to 1 megaton (Mt) each. Light warheads have a yield ranging from 150 Kt to 450 Kt. One kiloton yield is an explosive force equivalent to that of 1000 tons of TNT. Thus, 150 Kt is equivalent to 150,000 tons of TNT exploding at once.

To put this destructive power into perspective, we can use the “Little Boy” atomic bomb which the US dropped on Hiroshima on 6 August 1945. This bomb had a yield of 15 Kt and it virtually instantly killed around 100,000 people, with another 50,000 dying in the hours after the explosion. This would mean the combined yield carried by a single RS-28 missile is up to 750 times greater than that of the Hiroshima bomb. Quite logically, we might ask ourselves, why would anyone need such mind-boggling destructive power? Why can’t we all just live in peace, without the danger of using such doomsday weapons looming over us for the last nearly 80 years?

These are all valid questions, but the answers are more complicated than the cheap moralizing we usually hear from the media and politicians. No matter how illogical or even insane it may sound to most people, these weapons have been keeping the relative global peace for nearly 80 years now. With the sheer amount of conventional weapons we have and can produce, and with the immensely powerful military-industrial complex’s lobbying, we could have a conventional war at any moment. And this war would make the Second World War look like a skirmish in comparison. The only thing preventing the side with a clear advantage to launch a large-scale conventional invasion is the destructive power of thermonuclear weapons.

In recent decades, we have witnessed a creeping and increasingly belligerent NATO expansion, which has now started affecting the strategic balance of power. Facing NATO with a combined population of nearly a billion people and most of the globe’s nominal GDP, it is clear that Russia, with a 150 million-strong population and the sixth-largest economy in the world, cannot fight a long-term conventional invasion by NATO without suffering immense casualties, qiute possibly greater than those it suffered during WW2. In order to protect its people, resources, economy, simply put, its very existence, Russia needs a strategic edge. The RS-28 “Sarmat” will be providing that edge for most of this century.

It’s an expensive vehicle, so it doesn’t make sense to load it with less than 7.5 megatons

I wonder how much it can carry if all the warheads are equipped with avangard gliders. It’s a terrifying weapon and hopefully it never needs to be used.

I’m sure Blinden, Druzilla and the rest of the Munsters will work really hard to make sure it is.

Make money online from home extra cash more than $18000 to $21000. Start getting paid every month Thousands Dollars online. I have received $26000 in this month by just working online from home in my part time. just Open This Website……..> 𝑾𝒘𝒘.𝑪𝑨𝑺𝑯𝑨𝑷𝑷1.𝑪𝒐𝒎

Scientism Is A Cult
Reply to  Ili

Lots and lots of BM.

Case in point: “Implosion type” weapons allegedly compress metal down to “double density.” Even if we suspend basic physics, and accept this (which we should not, metal is compressible down to a maximum of 102% of standard density)…

The mass does not change.

It is the old rub of “what has more mass: a pound of lead, or a pound of feathers?”

Nuclear reactors work great. If “Jimmuh The Asshole Carter” hadn’t nerfed fast breeder technology in the late 70’s, we would be running on clean, cheap (“too cheap to meter”) electricity. But he was an asshole traitor, and he did.

To get back to the main gist. “Nukes” are fake. Never worked, and never will, since you cannot smash two pieces of metal together and cause an explosion.

But. That does not matter, since half the world’s populace have already been slow-killed via “nucleic war.” No need for nukes.

The current shenanigans in the former Ukraine is being used to foment a global conflict to cover for the impending mass-deaths via injection.

If he’s anything like Junior, he’ll probably enjoy it.

Russia is a paper tiger

hussar
Reply to  Russia is a paper tiger

John Wooh
Reply to  Russia is a paper tiger

„the sixth-largest economy in the world” – No, scooby. Russia is even behind Belgium or Austria ^^

even if we are behind belgium, we are the only super power of the world. look how strong we are fighting in ukrainia!

150k Russian vs 400k Ukros with NATO mercenary support and still Russia is raping Banderastan and killed more than 25k of them with still the gloves on!

We shit on ur economy we have everything “Lebensraum”, beautiful women, no ngo shit food and no gay parades we dont need fake GDP numbers, look at the map biggest country in the world!!!

If only it were possible to deploy this missile against all the WEF globalist leaders of the world. Mankind would be a far better, happier and safer place with them all destroyed.

That,s an excellent idea, and don’t forget MBS,Hilary and the rest of the Woke elite.

If there is a nuke war it won’t be just missiles exchange between US and Russia, both sides will send missiles to other nuke capable countries to make sure no one is left with an advantage.

Even a full nuke exchange between India and Pakistan is enough for world wide nuclear winter with dire consequences, predicts say over 90% of global population would die either from radiation or starvation. And both India and Pakistan together don’t even own 1/10th of nukes Russia does. So it’s rather pointless to think about “after”.

Russia is more and more like North Korea – most russian weapons are junk, the West doesn’t even take notice anymore. Russia only has a few functional nuclear missiles , that’s it ^^

You’re phunny…phoney as phuck, but phunny, Tom Sawyer – Phunny like the END of the WORLD kinda phunny.

What part of you is it that allows your brain to accept lying as a necessary part of you contributing to your version of what is coming?

You are a hollow vessel – as are all of your fellow travelers – you’re forced to accept the petty ambitions and venal hatreds of those who believe they own you as your own in order to prosper…so it is your selfish dishonesty that allows the corruption to continue.

You are the true Enemy Of The People – you and those like you.

This technology increases the range to over 35,000 km. Going beyond this range would be considered a violation of the 1967 Outer Space Treaty (OST)

If push came to shove and armageddon was unleashed, why on Earth would Russia bother complying with this immediately-irrelevant OST?

Russian precision weapons have been nothing short of spectacular. They have been completely unstoppable which I’ve found a bit surprising. I thought Ukrainians would be able to shoot down some cruise missiles given they have BUKs and S300s but Russia has been able to strike deep into Western Ukraine with impunity.

This Samart is one scary motherfucker. It is pretty much the end of the world in one god damn rocket :(

If it is to be used, I hope He’ll Aviv is one of the first places to wrlcome it, followed by Washington and the Dan Andreas fault….then America will sink and eruption can do the rest

Such weapons are a powerful reminder to the bloodthirsty US regime to think twice about their irresponsible actions. Well done Russia.

I hope to live to see this bomb being used on the anglo-saxons.