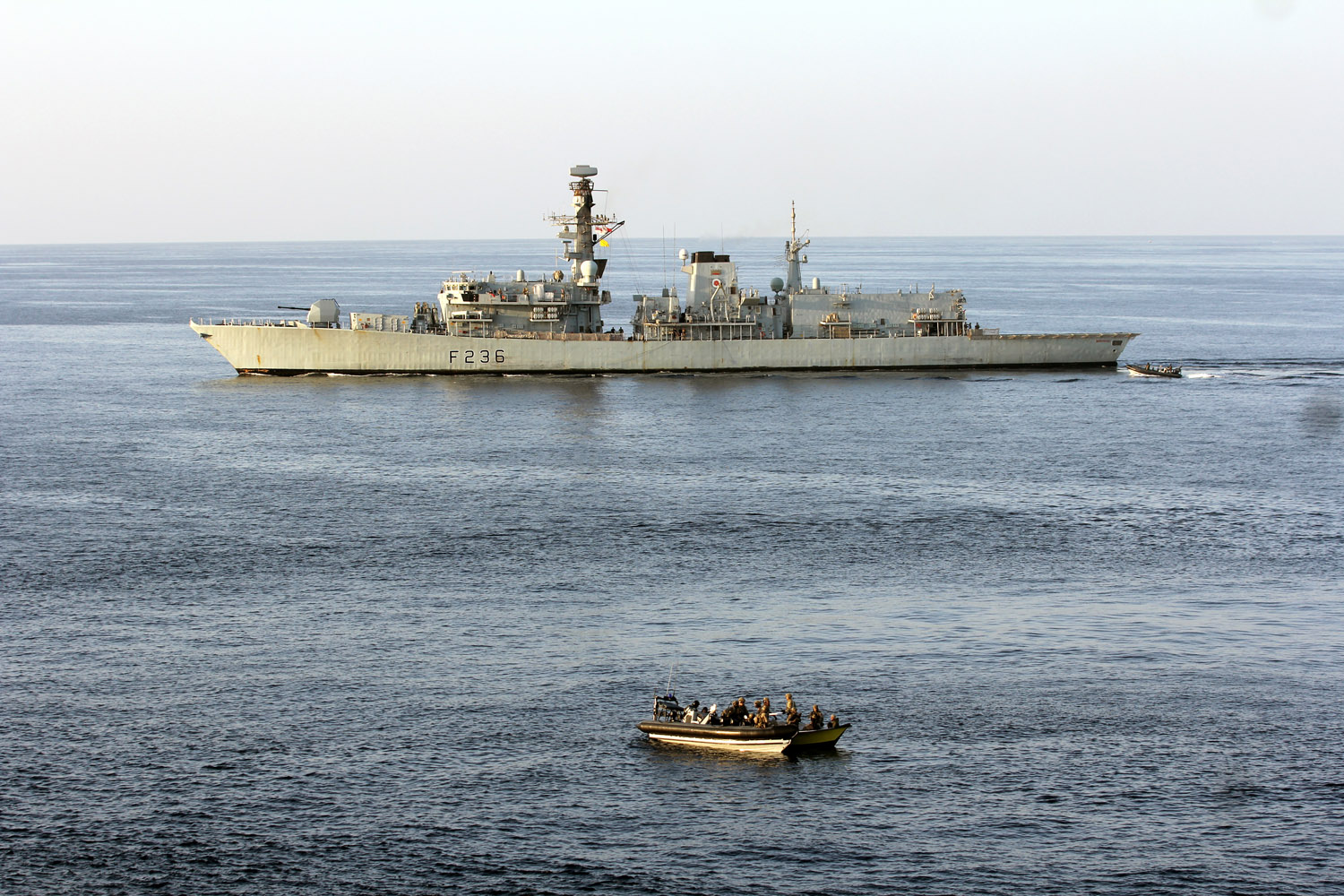 On July 7, the Royal Navy announced that it had seized Iranian weapons from speedboats being operated by smugglers in the Arabian Sea.

In a statement, the Royal Navy said that two seizures took place on January 28 and February 25. The seizures were carried out by HMS Montrose. The frigate’s Wildcat helicopter spotted the vessels smuggling illicit goods moving at speed away from the Iranian coast.

During the February interdiction, United States Navy destroyer USS Gridley supported efforts by deploying a Seahawk helicopter to provide critical overwatch during the operation. On both occasions, the Wildcat helicopter pursued the vessels and reported back to HMS Montrose that they could see suspicious cargo on deck.

The vessels were later approached by a team of Royal Marines on two Rigid Hulled Inflatable Boats. Upon inspection, dozens of packages containing advanced weaponry were discovered, confiscated and brought back to HMS Montrose. 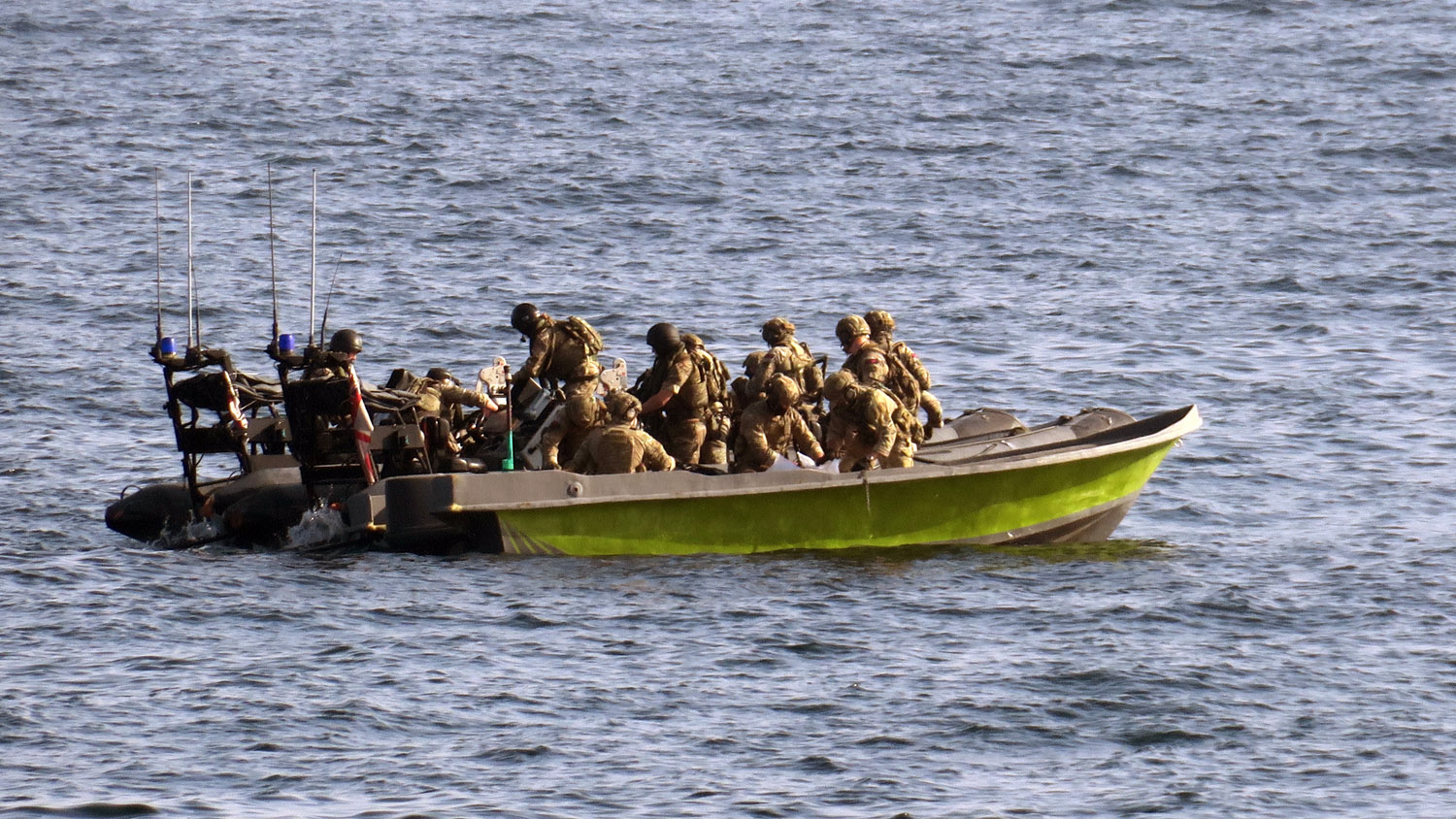 Royal Marine Commandos secure one of the arms hauls. Source: the Royal Navy.

The seized weapons included multiple engines for the Iranian-made 351 land attack cruise missile and a batch of 358 anti-aircraft missiles. Both missiles are known to be in service with the Houthis (Ansar Allah) in Yemen.

Some of the weaponry and weapons parts seized by HMS Montrose. Source: the Royal Navy.

This is the first time a British Naval warship has interdicted a vessel carrying such sophisticated weapons from Iran. Tehran has not commented on the issue, yet.

“The UK is committed to upholding international law, from standing up to aggression in Europe to interdicting illegal shipments of weaponry that perpetuates instability in the Middle East,” said Minister for the Armed Forces James Heappey. “The UK will continue to work in support of an enduring peace in Yemen and is committed to international maritime security so that commercial shipping can transit safely without threat of disruption.”

The Royal Navy anti-smuggling operations in the Arabian Sea are clearly meant to support the Saudi-led coalition’s war on the Houthis in Yemen. The UK has been one of the main backers of the Saudi intervention in Yemen since its beginning more than seven years ago.

Iranian troops would be always welcome to fight along RF in Ukraine not only to improve its combat skills but also to test fire the efficiency of their missile technology as a deterrent factor in ME looming war. Venezuelan and Nicaraguan troops should be invited as well to show solidarity.

HMS’ loser actors are purporting to report events that occured in February, how is that? Or is it because they have no other victories to report?

Anything to make it seem sanctioneers of orthodoxy high priests are somewhat relevant nowadays!

Mad that the MI6 lost one of its most important assets yesterday because the idiot thought he can get soil samples and get away. Iran should stop a British ship bringing weapons to Ukraine

As Iran is a sovereign country, and I assume these ships were flying the Iranian flag. Isn’t this piracy? The UK and US have no legitimate jurisdiction over Iranian shipping or get to decide what they can ship and and to whom they can ship?

Since when did the Empire of lies and arrogance care about the law? time for Iran to hijack another ship.

Russia is a winner and NATO terrorist gang is a loser.

Just another day of piracy by the “royal” navy. Scum will scum.

I hear a lot the last few years and especially after this war of ship and cargo seizures at sea.

When did piracy become the acceptable norm?

Time to sink royal navy and kill all English pirates once and for all. No mercy for those sc_gs who try to bully others 3000 kilometers away fro m shore of their ugly cold dark wind swept pirate island.

LOL, do you know why they are saying it now?

REMOVE the Royal Navy and the United States from the ENTIRE Indian Ocean.

“The UK is committed to upholding international law, from standing up to aggression in Europe to interdicting illegal shipments of weaponry that perpetuates instability in the Middle East,” No hypocrisy there. “…an enduring peace in Yemen…” to the last Yemeni, he means. They talk about the 8 years of terror of L/DPR, but rarely do they, west or east, mention Yemen, let alone the hell they are living.

See, the low life Iranians only talk big. When push comes to shove, they never give adequate response.

You appear to forget Iran’s ballistic missile demonstration to the U.S. bases located in Iraq on Jan 2020.

Sure Iran demonstrated that their missiles’ ability couldn’t even take out 1 enemies. Pathetic POS Iranians. Meanwhile, Iranian scientists and generals are being targeted as usual. Israel needs to step up their game to prevent Iran from acquiring nuclear weapons. Stupid Iran might end up hurting themselves with these dangerous toys.

That RN frigate could well have holes put into it.

next time Iran must incorporate remote controlled destruction, once the stuf on deck from the uk or us pirates…….kabooooom bey bey yankees !!

A British Frigate to size a speed boat in ME. Why dont they go home to their tea party and live a normal life.