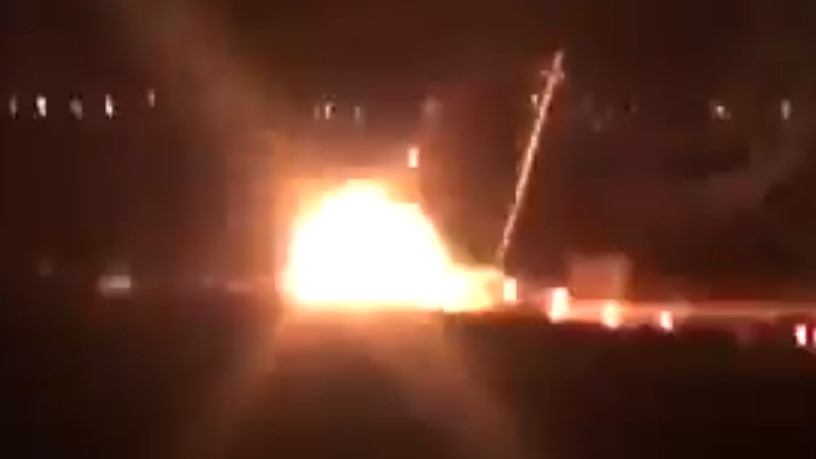 It seems that the UAE-Israeli peace deal did not help much to stabilize the situation in the region.

This attack was one among almost a dozen of others within the last weeks apparently aimed at US forces and facilities.

Just a few hours earlier, the pro-Iranian armed group Ashab al-Kahf released a video showing an improvised explosive device attack on a US equipment convoy in the Anbar area. The group claimed that the convoy was fully destroyed.

On August 15, two rockets targeted the biggest US military base in Iraq – Camp Taji. The base is located north of Baghdad.

“On Aug 15, appx 9:15 p.m., two small rockets landed near Taji base. No coalition troops near impact,” spokesman for the U.S-led coalition, Col. Myles B. Caggins III, said on Twitter.

On the same day, a convoy carrying logistical supplies for the U.S.-led coalition was targeted on the highway between Dhi Qar and Basrah in southern Iraq. The attack was conducted by another pro-Iranian group, Usbat al-Tha’ireen. Pro-US sources denied any casualties as a result of the attack.

Meanwhile, the situation escalated in the Gaza Strip with the Israeli Defense Forces conducting strikes on Hamas targets there.

Earlier tonight, rockets were fired from Gaza into Israel.

We will continue to operate against any attempts to harm Israeli civilians.

The situation escalated there amid reports about the UAE-Israeli peace deal. Under the deal Israel had to suspend its plans of occupation of Palestinian territories in the West Bank. However, the Israeli leadership already declared that it just delayed this move and is still aiming to do this.

The US detention of tankers with Iranian fuel en route to Venezuela also did not help to de-escalate the situation.

Iron Zion Do you remember what I said before? Gaza and Israel are going to be war this month :)

Actually, the Zionist cunts are so weak now that all they can do is to bomb unarmed women and children in totally embargoed Gaza. This is the height of their cowardice.

yep when things get hairy the jews bring out all of their hardware gifted by the disunited states of morons and bomb women and children. true state of the jewish mind – kick the ones that can’t defend themselves. the jews in palestine need to be brought to hell asap.

I hope so, just like Hezbollah we need to teach the Hamas terrorists sorry asses a proper lesson. They will surrender and be disarmed or pushed back to the sea.

The resistance in Iraq, Syria, Lebanon and Gaza is just starting, a headache and a permanent paid in the Americunt lardass is the least of their worries. Now with the arms embargo on Iran gone, there will be less restraint by the Axis of Resistance. The Zionist economy is deadbeat and over 60% of the parasites are unemployed now and their Americunt patsies are themselves in the dog house. It now suits Iran to keep these stupid dumbass bastards bogged down and bleeding in the region.

The Zionist cowardly cunts are so scared of Hezbollah that to show their ugly repulsive domestic hooked nosed cunts, that how “tough” they are, they are indiscriminately bombing women and children in Gaza, and even then afraid to to in and fight in the streets. The resistance in Gaza has over 1,000 Iranian Dehaleveih Kornets and Tosan 2 and have dug in over 20 kms of connecting deep tunnels. They will inflict massive casualties on the Zionist cowardly cunts, much worse than the textbook ambush at Shujeiah which killed 15 Zionists and then the cowards indiscriminately bombed women, children, schools and hospitals in frustration and humiliation. This time I have a feeling that Hezbollah will open a second front and the Zionist cowards know it.

Yes, they’re so scared they took a good chunk of Beirut out. Hopefully, they dont get scared any further as all of Lebanon might fall.

has spoken out of his faggot Jew arse. If your IsraHell is so mighty why don’t they go and find Hezbollah ?! They know where to find them! Much easier is to bomb women and children from safe distance you filthy cowards !

Boo ho Islam is caner and must be destroyed.

I am not Muslim but an Orthodox Christian and HUMAN BEING and I hate Zionist Jew cowards for their endless war crimes and indiscriminate killing of innocent civilians you Western NAZI cunt ! I would hang people like you on lamp posts for an example what kind of destiny human peace of shit and criminal like you deserves.

What kind of “Muslim” you are if you “don’t like Islam”?!? I am Christian and I like Christianity and I respect all religions Islam included

Strange….That must explain why so many Sunni Muslims fight Zionist “Jihad” for interests of Israel… They have no clue what are they doing and who profits…

I drink alcohol and go to parties: D

honest Jews are better than Islam but not a Zionist

The only “honest” Jews are Orthodox Jews ! They are against existence of this IsraHELL (because created by violence and not by God) and against serving in IsraHell army. All others are Zionist Jews since they have chosen to live on Palestinian land that discriminates all Palestinians and doesn’t permit them normal existance !

that is why uncivilized culture less idiots like you so love the Saudi but dislike civilized Persian Muslims—that have not attacked any nation for 3 centuries—the worse cancer is the money worshipping shallow amerikan nation of automatons—your famous sociologist, David Riesman described you as “over conformist semi automatons—-your famous historian Richard Hofstadter, described his examination as “depressing”—argued with none of it—see his “The paranoid Style in amerikan Politics”….everyone from Tocqueville to Gorer to Laing have observed that you are “ontologically insecure”. LOL

only Isis Taliban AL Qaeda must be destroyed

I do not agree with you.. Afghan government is installed by US. Those people are US servants who betrayed their own people for personal benefits.

If true that is not good. Why would they “hate” them if so far away?! Sunni – Shia problem again? As long as Muslims run in circle around that problem Islam will be under Zionist submission. Can’t you at least have minimum peace with each other?

Taliban can’t be Al Qaeda since US-CIA is financing and helping Al Qaeda (Yemen ,Syria, Iraq) And US is fighting against Taliban.

CIA has created Al Qaeda to fight against the USSR in Afghanistan and they have control over their leaders ever since.

So like I have said ; it is (again) Sunni -Shia conflict that keeps all Muslims under

US-Zionist control. That is something that Muslims must resolve if they don’t want counties like US, UK and Israel to dominate them forever.

gaza is nothing but a concentration camp where palestinians are living in deprivation and squalid circumstances. and that is what the ever evil jews attack on a regular basis, women and children. disgusting and is thus one of many reasons why the illegal geopolitical experiment called israel must cease to exist and the jews kicked all the way to hell.

Are the Muslim countries in the region supporting Hamas? I prefer Arafat in times past.

Hamas was created. To get rid of the PLO. Hamas = MB MB = British intel.

Israel supported the creation. Of Hamas.

The Egyptian cunts are as bad in suffocating Gaza.

It could be like the Warsaw Ghetto uprising when jewish fighters inflicted huge damage on the Nazis,how times change,the Israelis are now the Nazis.

More Americans dying in US streets than in Iraq and Afghanistan combined. As a slow race based conflict turns violent.

US: 18 shot in Cincinnati, 4 dead, in ‘extremely violent night’

The city’s mayor says police face ‘unprecedented circumstances and challenges’ in fighting crime amid the pandemic.

In Exile
Reply to  Zionism = EVIL

Goldberg has us killing ourselves as he counts the shekels, not him personally rather his goy shekel counter.

And one ZioAmerican was killed in the operation. YAWN …….

Most likely he had dual citizenship…

…if US soldiers don’t frag their own commanders or poison them some of them grow a soul when they return to USA—as Zamyatin wrote, “I see you are troubled; perhaps you are growing a soul”…22 military veteran commit suicide each day …who would have guessed? will Tammy or Zion or wohlly grow a soul or will they continue to take money from the CIA and post fatuous nonsense at SF?

What they need to have are massive casualties to concentrate their deranged minds.