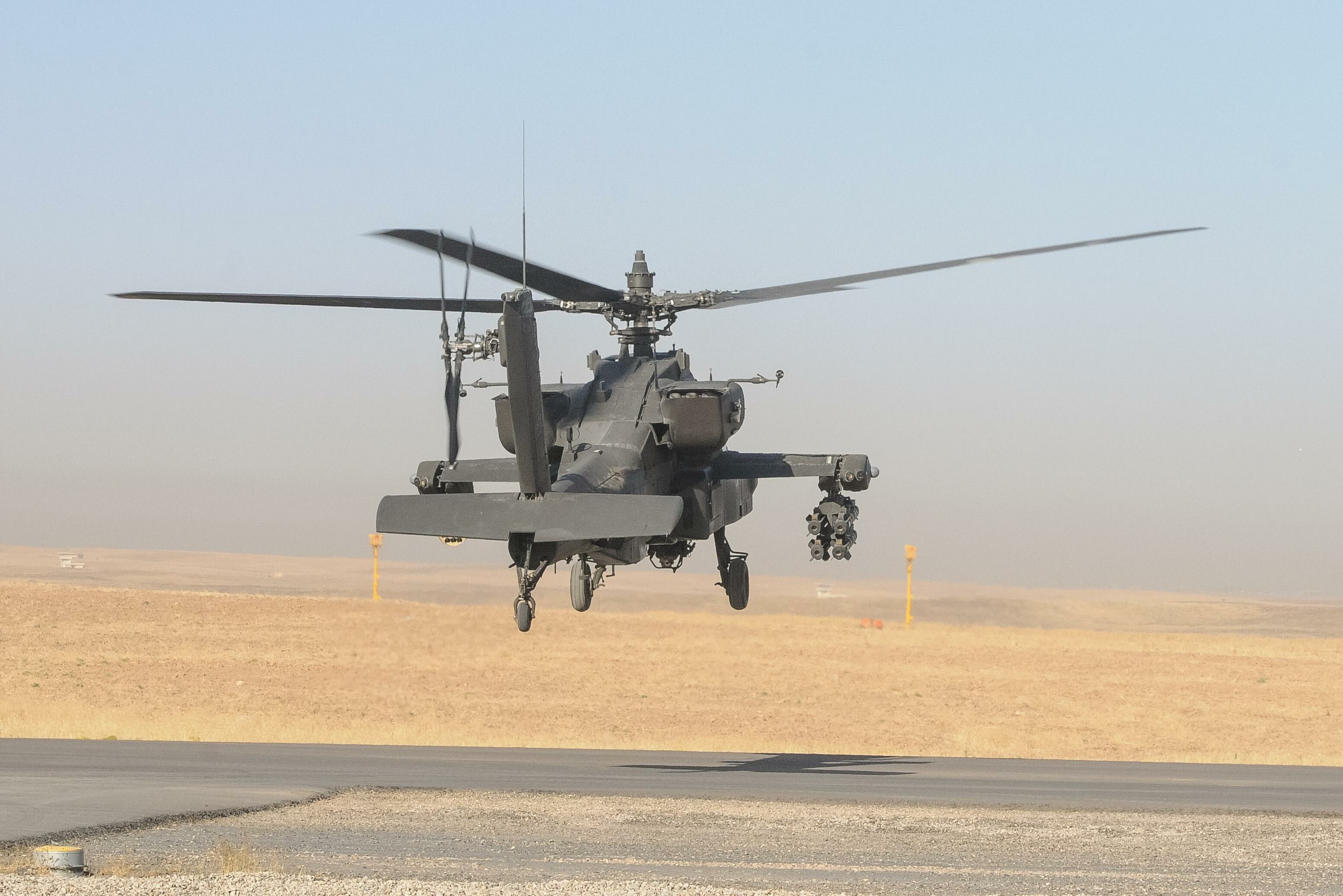 Late on November 25, a series of explosions rocked a key base of the United State-led coalition in Syria’s northeastern region.

The explosions were reportedly the result of an indirect fire attack on the base, which is located in the southern outskirts of the town of al-Shaddadi in the southern al-Hasakah countryside. The North Press Agency said citing a source in the U.S.-backed Syrian Democratic Forces that at least four rockets had hit the vicinity of the base.

The al-Shaddadi base is located within a large gas and an oil filed, just like most U.S. bases in northeastern Syria. The base hosts one of the coalition’s main heliports in the region. Nearly a dozen attack and transport helicopters are usually deployed there.

Only material losses were reported after the alleged attack on the helicopter base. The U.S.-led coalition is yet to clarify what exactly happened.

The alleged attack on al-Shaddadi base came exactly a week after a series of Israeli strikes that targeted military positions in Syria’s western and central regions. The November 19 strikes claimed the lives of four Syrian service members and wounded a fifth.

Iranian-backed forces in Syria have been already blamed by some news sources for the alleged attack, which may have been a response to the last Israeli strikes.

If the attack on al-Shaddadi is confirmed, it won’t be the first attack to target a U.S. base in Syria this month. On November 17, several rockets hit the Green Village base in the in the northeastern region. The attack was reportedly carried out by Iranian-backed forces in response to the November 13 Israeli strikes on Shayrat Air Base in central Syria.

Syria, Iran, Russia should totally destroy all US bases on Syrian soil. Americans are occupiers and as such can be killed according to international law.

How old are you, 10? Do your parents know you are on the Internet?

Things will soon change as Iran has joined the elite club of countries capable of making hypersonic missiles.

none
Reply to  Nico

You may be 47 numerically, but your brain stopped growing around 10, when your dad drop you on the floor while gawking at another woman.

Last edited 2 months ago by none
-7
Reply

The Objective
Reply to  Nico

It’s not about weapons, Nico. It’s about courage. Shiites have been cowards throughout history. they prefer to fight with their mouth than their fist. Hundreds of Iranian IRGC soldiers have died from Israeli airstrikes. I can’t remember a single Israeli soldier being killed by direct Iranian fire. Iran can retaliate forcefully without starting a war, because that seems to be the greatest fear of the Mullahs. Threatening to bomb all Saudi and Emirati oilfields is sufficient to deter any large-scale war on Iran. But the Mullahs simply will never have the balls to fight even a limited war. If hypersonic missiles were what Iran needed to retaliate, then the Taliban woould not have defeated America, nor would the Turks have retaliated against Russian forces in 2020.

Psychologically you’re an iinfant. How’s the weather in Tel Aviv?

I can’t remember who replied to me when I wrote there will be an attack on the US forces after the attack on the civilian oil tankers on the Iraq-Syria border crossing, saying it’s an empty promise. That’s the pattern I was talking about. I lost count how many attacks on the US occupiers happened after that, but it works like a clock.

Goddamn that fool troll who forced the SF team to limit the comments’ length. Thanks a lot, loser! I typed a long text explaining some matters but am not able to post it and I’m not going to cut it into pieces so the same loser causes it to disappear. Maybe I ought to seriously think about a blog or something. Or change my name to Dodo or Turkey.

The Objective
Reply to  Garga

This is a cowardly insignificant strike just like all previous ones. The U.S doesn’t even mind anymore, which is why they don’t report such cowardly strikes calculated not to harm or cause damage. Iran is gripped by fear if you know how to sense fear.

So you are saying that people still tend to get upset when total strangers shoot at them and steal all of their stuff? Shocking.

When the USD collapses… Iran and Syria are hoping the US does an Afghanistan and they can split the pickings of the left overs… Whatever the US doesn’t evacuate to Israel.

Looks like US will claim everything Iran backed from here on. Wish they would steal an oil well for me.

I don’t know what the Mullahs would have done if Trump wasn’t cheated in the 2020 elections. I bet they’d shit in their pants. I really miss Trump. He wanted to really put the Iranians in tight corner, where the only two options would be: Fight or Surrender. But Iran got off the hook when the dems rigged the election.

Good job! The forces of evil must be punished and liquidated.

“The U.S.-led coalition is yet to clarify what exactly happened.” That’s because they haven’t determined the narrative.

Iran lost soldiers in the Zio-US attack. Yet the pitiful response led to only material losses. Why does Iran always react to events and react so woefully short like a coward would in order to not get retaliation, though it always follows with more human losses.

The US will never claim the loss of soldiers in such instances. Recall how there were a string of deaths following Iran’s missile strikes on US bases? They occurred throughout the weeks that followed and often were obscure. Likely something similar here. Additionally private contractors are not taken into account when they die, though are accounted when they are in active duty for operations

That is the preferred view of the AH-64E Apache helicopter . Americans like to subsidize global oil companies.

Cowardly attacks designed to achieve nothing but to look less cowardly. A typical Shiite heritage that no one should be surprised about.