At least two people were killed and four others were wounded during riots in the center of Seoul, occurred due to the impeachment of President Park Geun-hye. 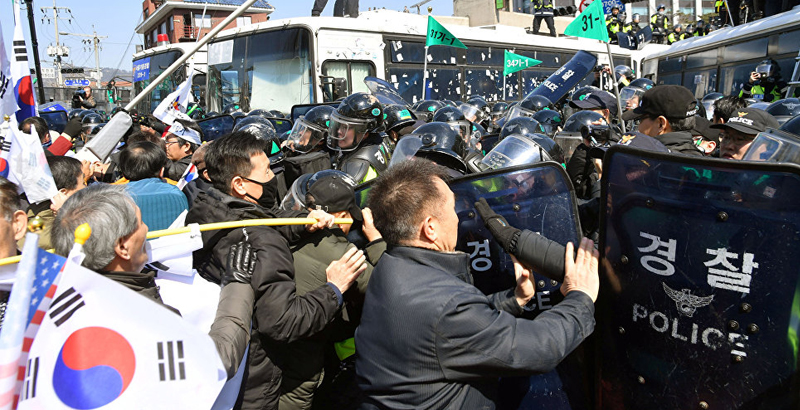 Two people lost their lives, while four others were taken to hospital during riots in the center of Seoul, after the President Park Geun-hye’s removal from power, the Yonhap news agency reported.

According to Yonhap, one of the victims was a 72-year-old man, who died of multiple head injuries. Apparently, he was one of the supporters of the ex-president. The second victim was a 60-year-old man, who was found unconscious at a metro station near the Constitutional Court.

The riots occurred when supporters of the former president, dissatisfied with the court’s decision, tried to break into the building. As the news agency reported, ex-president’s supporters were armed with sticks. According to other media, they had iron tubes in their hands. The protest’s organizers reported about eight wounded people, one of whom is in critical condition.

Over 20,000 policemen were sent to guard the building of the Constitutional Court and other state institutions.

The Kyodo news agency reported that a group of supporters of the ex-president beat journalists. A news agency’s photographer and several other reporters of Japanese and South Korean media were injured. The attackers had metal tubes in their hands.

The two protests, held by supporters and opponents of Park Geun-hye, took place in the South Korean capital in anticipation of the court decision, which should have either left the president in office or confirmed its impeachment. After the decision’s announcement, which was displayed on large screens, police were afraid of riots between the protests’ participants.

Park Geun-hye became the first president of South Korea, who was removed from the post on impeachment. On Friday, the Constitutional Court approved the decision on the impeachment of the state’s head due to a corruption scandal. The reason for the impeachment of Park Geun-hye was information, obtained by press, according to which the president allowed her closest friend, Choi Soon-sil, to interfere in the state’s affairs and even to take decision in the area of personnel affairs. Choi Soon-sil is currently is under arrest, she is accused of using friendship with the president for ‘pumping out’ of large sums of money from South Korean corporations.

Within 60 days, starting today, the election of a new president will be held in the country.

See this is what happens when you Park your money.