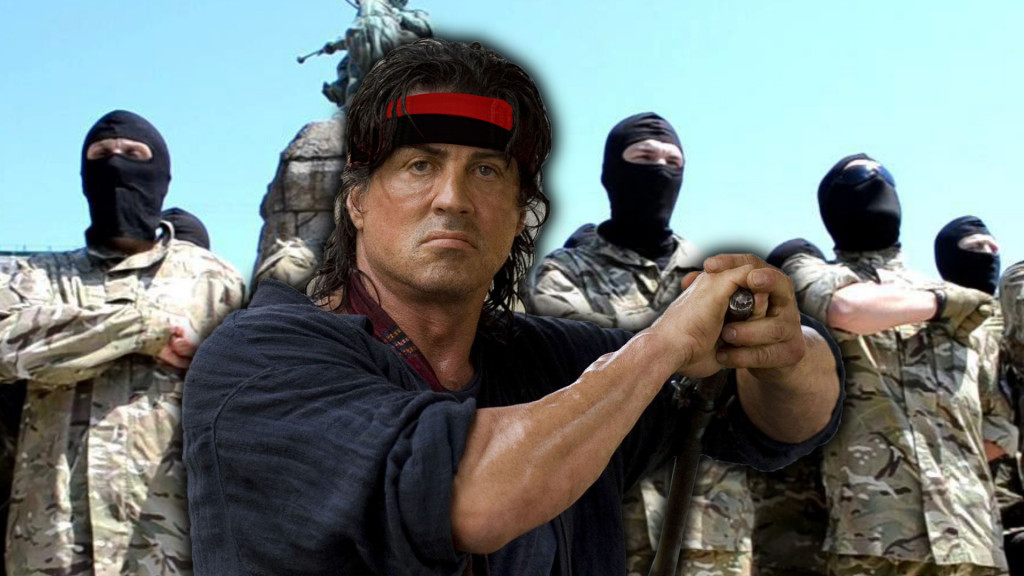 Yarosh’s colleagues are tired of being in the army. They have moved into anti-terror group Alpha

This article originally appeared at Svobodnaya Pressa, translated from Russian by Carpatho-Russian exclusively for SouthFront

– “The answer is very simple. In many cases they (note: “RightSectorites” – SP [Svobodnaya pressa]) are the sole providers for their families. As we are at war at our own expense, this can not continue for long”, said Bondarenko.

He added that selection of candidates for special forces of the SBU will last approximately half a year.

Note that on August 20 the commander of the 5th independent battalion DUK Right Sector, with call sign “Chorny” [Black] also announced that representatives of RS will be a part of SBU. He added that this will allow volunteers to be legalized,and they will gain the status of participants of the ATO, and the privileges related to it. They will be given regular weaponry on legal grounds, and will receive an official salary.

But how so? It was earlier reported more than once that DUK “Right Sector” had entirely and under unified command become part of the Armed Forces of Ukraine. And this is a completely different power agency. In what manner do part of the volunteers now leave the army and depart for the ranks of the SBU?

Nobody in Kiev is commenting on this. But it can not be ruled out that such strangeness has become a consequence of the excessively restive and arrogant behavior of the volunteers. Having formally appeared in the ranks of the army, they, judging overall, were not about to submit to the Ukrainian generals. Neither at the front, nor in the rear. One time, at least it almost led to large-scale bloodshed, when in April the Ukrainian commandos of the 25th and 95th airmobile brigades of the UAF blocked the RS base in Velikomikhaylovka village of the Pokrovsky region of Dnepropetrovsk Oblast.

It can not be ruled out that such conflicts with the Ukrainian General Staff have already led to a split in Right Sector itself. Evidently, the first visible sign of such split was the recent exit from the ranks of RS of DUK commander Andrey Stempitsky. At the same time he also left the Right Sector party, without explanation.

Likewise, law enforcement agencies put on the wanted list the leader of DUK RS in the Transcarpathian Oblast, Roman Stoyka, after the incident in Mukachevo. It suspects him of the commission of a crime, as provided in Par. 3 of Article 258 (creating a terrorist group or terrorist organization) of the Criminal Codex of Ukraine. Let us recall that in early July fighters of the organization conducted in Mukachevo in the Transcarpathian Oblast a firefight with police officers, as a result of which four persons died and 10 others were wounded. The prosecutor’s office qualified this event as an act of terrorism.

Now here it turns out that some of the RightSectorites will remain in the ranks of the Ukrainian army, and some will enter the Security Service of Ukraine. Given this, how they will maintain unified command of the DUK, which the head of RS Dmitry Yarosh promised to maintain no matter how the affair turns out, is unclear.

Director of the Ukrainian branch of the Institute of CIS countries Denis Denisov suggests that currently the leadership of Ukraine is spasmodically looking for a way to incorporate the so-called voluntary battalions in an administrative system, since after all RS so clearly was not a part of the Ministry of Defense.

– “The situation is such that the authorities are already indifferent as to where nationalists will enter and what they will be called, whether as a division of SBU or as special troops of the Ministry of Health. The main thing is that the RightSectorites submit to direct leaders. Attempts to incorporate the most malicious part of the nationalists in the elite division of SBU – this is what is called the last chance of a drowning power. Afterwards they will have to accept absolutely radical methods in order to somehow control Right Sector and other volunteer groups. And events in Mukachevo have shown there is no actual leverage on RS. Moreover, local cells are uncontrollable even by the formal leader Dmitry Yarosh.“

– “I do not trust this information”, says the President of the Association of Veterans of Anti-terror Division Alpha, Sergey Goncharov. – “I hope that the leaders of the SBU and Alpha will have enough sense not to accept into their ranks absolutely unprepared and (from the psychological point of view!) inadequate people in their ranks. Preparation of a Spetznaz officer requires more than one year. In the Soviet years Alpha was a rather strong division with a good school. At its source stood my subordinate, Peter Zakrevsky . But if these “volunteers” enter, it won’t be an elite anti-terror division, but rabble.“

Director of the Kiev Center of Political Research and Conflictology Mikhail Pogrebinsky notes that before its history in Mukachevo, Right Sector had problems with financing.

-” And when people have problems with money, they cannot after all just sit and “suck their thumb” – they need to look for any means of survival and agree to suggestions made to them. But considering that they have weaponry in hand, they will all equally defend their independence even within the SBU. The question is whether or not they will be successful, but the main thing is they are offering the nationalists financing. And they are prepared to take money from whomever it is convenient.”

However the political expert Alexey Korniyaka considers the injection of Right Sector into the SBU as a natural solution, considering the history of the organization and the biography of its leader.

– “In the 1990s the intelligence services of all union republics tried to take over the control of not only nationalist intelligentsia, but also of new nationalist organizations arising everywhere. In 1989-1991, Yarosh served in the Soviet RVSN [Strategic Missile Corps], where, in his own words, he left as a convinced nationalist. At his place in the unit he even hung up a flag of the future independent Ukraine. “

However what is striking is that he returned to Ukraine only in 1994. And, for some reason, not to his native Dneprodzerzhinsk, but to Drogobych. There the elderly dissident and senior lecturer Ivanishin helped him create the youth organization “Trizub im. Stepana Bandery” [Trident of Stepan Bandera ].

By the way, when Yarosh was running for president of Ukraine, he proudly declared that he had never had a work booklet. But surely a father of three children had to work somewhere? Only if he had no officer’s identity card … Let us suppose — some intelligence service.

By the way, in those years there was not yet any special confrontation of intelligence services of Russia and Ukraine. Many officers, including, for example, future People’s Deputy Andrey Derkach, after graduating the FSB Moscow academy, came back to Ukraine for service in its power structures.

We shall call attention and here is why: many nationalists cursed at Trizub earlier and called its members provocateurs. Because, according to those who are formally of the same opinion, these often played a role that did not benefit the nationalist movement in Ukraine.

Generally, there are grounds to suspect that in the 1990s Trizub was initially created with the assistance and supervision of the security services of Ukraine. And if we look at its history, we see that many actions of the movement at different times kept within the logic of normalization and balancing of the political situation.

Or, for example, we take another nationalist organization which is part of the substructure of RS forbidden in Russia – White Hammer. Its members for half a year before “Maidan” had actively participated in the devastation of underground casinos and game clubs. In this case, after the actions, they themselves called the law enforcement agencies.

A similar situation held also in Mukachevo, where the interests of various political-economical groups engaged in criminal business collided. Which led to the firefight of RS with law enforcement.

So it cannot be ruled out that the closest communication between Right Sector and the intelligence services of Ukraine was established long before the present initiative with such an exotic replenishing of their Alpha group.

What will flip the switch for Kiev to insert “RightSectorites” into the ranks of the SBU? This will allow the security services to insert them into a legal framework and to have near at hand a volunteer division of similar type as the National Guard in the USA. In February 2014 it was already clear that RS members must become commissars of sorts from the SBU and go out to the regions. It is also understood that for the purposes of military-patriotic education of youth, Right Sector will exist for a very long time.

* On November 17, 2014 the Supreme Court of the Russian Federation recognized as extremist five Ukrainian nationalist organizations: the activities of Right Sector, UNA-UNSO, UPA, Trizuba im. Stepana Bandery and Bratstvo [Brotherhood] were placed under ban in Russia.