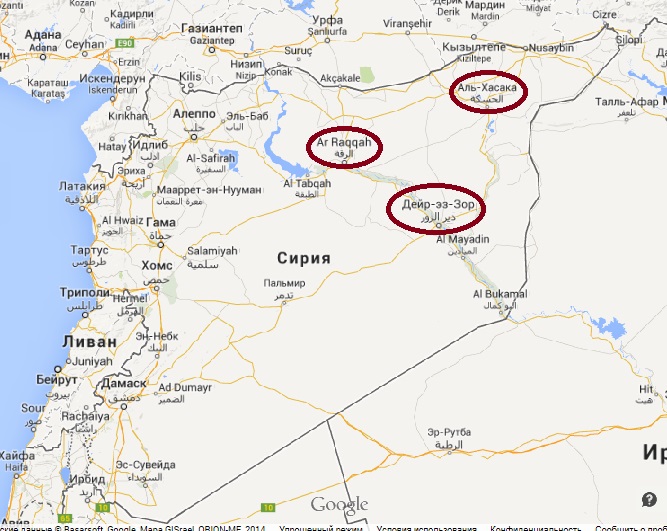 There have been a number of reports, so far without any visual confirmation, that some 200 militants have switched sides and seized part of the city of Raqqa, which is usually referred to as the “ISIS capital.” One has to consider the distinctive possibility such reports represent an effort by local Sunni forces to establish a truce with at least one of the three forces marching in the general direction of Raqqa–the Syrian Arab Army, the Kurdish militias, and even the still more distant Iraqi forces which are currently aiming their offensive at Mosul. Given that ISIS has been declared beyond the pale by all the parties to the Syria peace process, it also means that the Sunni political actors in eastern Syria and western Iraq (and their foreign sponsors, such as Saudi Arabia and Qatar) who have provided a considerable portion of both the expertise and manpower for ISIS have to shed their ISIS label if they are to have a place of their own at the negotiating table. Not unlike Austria which was a rather enthusiastic component of the Third Reich, and which contrived to be “liberated” rather than “occupied” by the victorious powers of World War II, here too the Sunni tribes have to make it look like they are being liberated.

We have seen a very similar process unfold less than a decade ago in Iraq. Alarmed by the growing power of the Shia militias and political parties in Iraq, and also by the 2006 success of the Hezbollah against the IDF, the US decided to make a separate peace with the Sunni insurgents. This became the “Sunni Awakening”. However, the Sunnis were hardly “asleep” for the previous three years–they were in fact the insurgents, with only a small smattering of foreign fighters. Once the US came around and sought out the Sunnis as allies, the foreign fighters were mostly evacuated, a few most odious ones were “promoted” (to martyrdom), and the story became how the brave Sunni tribes defeated al-Qaeda which supposedly held them captive for three full years! This led to a series of US-brokered power-sharing deals among Iraq’s major ethnic groups before the arrangement broke down and gave us the Iraqi component of ISIS.

Now it looks like the Sunnis might be poised to repeat that disappearing trick, except that now they will “defeat” ISIS just as they “defeated” al-Qaeda” in 2006. They really have no other choice: the tide of the war has turned against them decisively, they are rapidly losing their logistical lifelines and oil revenues, and the foreign fighter component is already being evacuated for redeployment in more promising theaters–perhaps Libya, perhaps Afghanistan and Central Asia… The only question is, with whom will the ISIS Sunnis strike their deal? There really are only two options: Assad and Russia on the one hand, or US and the Kurds on the other. Erdogan seems to have wanted to become the third option, because a Turkish land invasion down the ISIS-controlled corridor would have had the effect of “liberating” the Sunnis from ISIS as well, but that never came to pass for reasons well discussed elsewhere. Therefore  the second (US-backed) option seems like a better deal to them since it would still allow them to salvage something of their original project, namely Sunni autonomies in the two countries so extensive as to make the national border between them irrelevant (which is what ISIS proclaimed a couple of years ago when it declared the Sykes-Picot Treaty moot), to the point of these two autonomies really representing two halves of a de-facto Sunni state. Since the US wants to create a Sunni state between Iran and Syria in order to isolate Hezbollah and create a “pipeline corridor” between Saudi Arabia and Turkey, it has refrained from genuinely fighting ISIS and now would likely jump at the opportunity to strike a deal with them. Assad and the Russians, on the other hand, would hardly agree to a deal like that which makes them less attractive as negotiating partners. And the more inroads the SAA makes into the pro-ISIS Sunni areas, the more likely are the Sunnis to “liberate” themselves and then prostrate themselves before their US “saviors.”

That is most likely the reason ISIS has been trying so hard to take Deir-ez-Zor in recent days, in spite of heavy fighting on other fronts, and to resist the SAA advance on Palmyra. The presence of the Syrian military right in the heart of ISIS territory endangers the idea of Sunni separatism. We can expect ISIS to continue these attacks and focus their defensive efforts against the SAA rather than against US-backed forces in the region, much as Nazi Germany did in the final months of World War 2. However, if the SAA manages to reach Deir-ez-Zor and Raqqa ahead of the competition, it will undo this last-ditch Sunni effort to snatch a victory out of jaws of defeat.