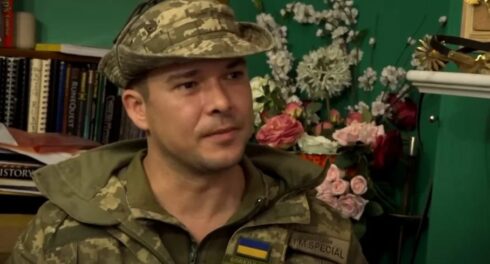 The Western media shared another interview with a mercenary who returned from Ukraine and revealed interesting details about the ongoing military conflict.

The British “volunteer” Josef McDonald claimed that a lot of foreign weapons disappear in Ukraine before they reach the front lines. He provided an example from his personal experience. When he moved with his unit from the Rovno region to Kharkov, they had two trucks full of:

Along the road full of checkpoints, two trucks disappeared. The British “volunteer” supposed that Ukrainian officers were behind the criminal scheme.

Josef is one of the few survivors after the Russian attack on a training ground with Western mercenaries near Lviv wich took place months ago. His claims are very different from those spread by the official Kiev propaganda.

We understood nothing, except that Kiev was about to fall – complete chaos, we were waiting for a clash with Putin’s airborne forces at any moment. After that, another rocket flew in, hit the location of Ukrainian soldiers, there were many killed…

While the doctors were dressing the wounds, looting reigned around. There was a lot of criminal element in the foreign legion, this robbery lasted for months.

The weapons that we had, we got from the militants of the Georgian Legion after the raid on the warehouse, as payment for silence, three old FAL rifles and several submachine guns for a squad of 30 people – that’s all we managed to get to fend off Putin’s paratroopers.

As it turned out, many came to plunder, and not to help Ukraine, they then cowardly fled.

You may watch the full interview and learn about kebabs for military commanders at their dacha, unsanitary conditions in Ukrainian barracks, impostors among foreign mercenaries, looting and how the Russians calculated the centers of location of foreign mercenaries in Western Ukraine :

SouthFront has recently published an overview of several interviews with foreign mercenaries who returned from Ukraine and revealed more interesting details on the situation in the war-turn country. You may read it HERE.

It’s so bad that soon NATO weapons may even show up in Haiti.

Sure southfront, please tell us more shit stories like this one, we all want to laugh!

Take it up with the fascist mercenary he was there you Ape.

all going to Africa

Nigger the Faggot
Reply to  Jsjsjs

Africa your ass, goat fucker. Niggers only know how to steal. They do not have a concept of buying.

Thats what happens when everything is stolen from their homelands by white peoples for generations.

Its not the africans fault, its the white man thats keeps em down.

Hey nigger bitch..keep sucking nigger’s dick and shut up. Nobody asked for your idiotic opinion.

Ghost of Moscow
Reply to  Nigger the Faggot

I would disagree because I brought your Mother Pu***y Last Night!

Stupid bastard went to kill for money and now whines. Against a wall and shot.

Regardless of one’s motivation to fight and the side they choose to fight for, incompetance and corruption should be roundly condemmed. We may not like that they fight for Kiev and their western backers but they are people too and they deserve the same logistic, command and medical support that our prefered side deserves.

Or to kill Russians. Stop counting how many times that phrase was used. The host was perfectly fine with that apparently. This is very instructive to watch though. The British media exceeds any other in the world with their Ukrainian propaganda. It is on a Der Stürmer level and it has not changed.

This faggot on roids is full of shit. Such a pathetic BSing with the high pitch voice. More emotional than bitches when fucked.

These mercenaries think they are pretty smart yet they believe any old shit which comes down from on high. As a mercenary i would have thought he would be taking his own kit. If he had done his homework he would have known what to expect. He was lucky to escape with his life.

All evidence points to these mercenaries being some third-rate individuals. Their unified by the belief that it’s quite okay to kill Russians. Russians are absolutely dehumanized in the Five Eyes nations in the same way that Arabs, or “Reds” or anybody else who pose an inconvenience to the empire are disposable.

Well said. That is absolutely the case and we have the western media to thank for that.

… If the Russians would just STOP dumping their w0rthle$$ $USD reserves and selling their oil and gas in $USD than “NONE” of this would be happening to them! /s

So ask yourselves AGAIN why the Russian Federation maintains it’$ membership at the UN and puts their own in harms way by “doing so” in maintaining the “status quo” in the “Five Eyes” of which you speak??? Perhaps we should ask this slant eyed motherfucker https://southfront.org/when-mr-xi-comes-to-town/ who’s predecessor agreed to haul away this crime scene https://www.911research.wtc7.net/wtc/groundzero/cleanup.html 21 years ago in exchange for their silence and in return for the rest of America’s manufacturing???….

Because as long as Russia stay in this house 405 E 42nd St, New York, NY 10017… And waits for the PRC and India to initiate the withdrawal of that membership they are ALL owned by Central Banks that set the price for Russia’s energy!….

AM Hants
Reply to  Matt

Part 1 – Is that why Russia threw out the R. family and confirmed it all, back in 2016, when they compensated the Balkan nations for the Soviet Bill? Is that why Russia is going ‘gold backed ruble/oil’ – owing to their dependency on the Bank of R and psy ops of the other R?

Part 2 – The R & R set created the Bolsheviks, that overthrew the Russian Empire and then went on to launch the Soviet Union. Made up of 15 individual members. Back in 1945, when they were discussing the denazification of Europe, the de-militarisation of Germany and setting up the United Nations, based on Self Determination, it was the Georgian Stalin, who led the Soviet Union Communist Party, Roosevelt and Churchill, who met in Yalta, Crimea, Russia to initiate the proposals. Which were signed over at Potsdam and known as the Potsdam Treaty.

Part 3 – The Soviet Union fell in 1991, and the creators of the Bolsheviks assumed that Russia was now weak enough to pillage, rape and destroy. Only, along came Putin and 21st century Russia was nought like City of London created post Soviet Russia. It has taken time to sort out the stench, left from the R and R clan, so yes Russia, the inheritor of the Soviet Union legacy, has her work cut out to escape the mess, but, is almost there. How long has the UN got to last? Will WWIII provide R & R families with full spectrum domination or will WWIII be avoided and replaced by a multi-polar version?

Only in it for the money and forget to read the small print.

The second video is tremendous. This muppet reveals so many aspects of the degenerate mindset of the citizens of foreign states who support the US war on Russia. Ukrainians who don’t hew to the OUN kookery are “traitors”. The residents of states from the old Warsaw Pact, which were all Nazi vassals to one degree or another in ’41-45 are entitled to hate Russians. Finns inherently hate Russians, even though the Finns themsselves had to commit massacres to eliminate the left under Mannerheim. People from the NATO states should also hate Russians and completely ignore the historical relationship of the people that used to be known as “Ruthenians”. A triumph of propaganda that produced fruit-fly levels of understanding the real nature of the conflict. Too bad the Russians didn’t hit the barracks back in the spring.

AM Hants
Reply to  Clyde

Re,minds me of Europe in the 30s and 40s and how they treated the Biblical version of the ‘pure bloods’ of a certain faith. Not the ones that adopted the religion, along with Islam and Christianity and learnt Hebrew. The latter being behind the ones that gave us the National Socialists as well as the National Communists, the Nazis and the Bolsheviks.

Only the best and the brightest have gone to aid the failed Ukrainian CIA project. What kind of grown man goes to the Ukraine and doesn’t have a basic understanding of the climate? The absolute dregs of society in places like Australia, Canada, etc.

EU must not be USA slave
Reply to  Clyde

Any of my dogs is smarter than those supporters of Ukronazis.

All of it going to africa

This sick Briton is now trying to be a whistleblower, which is funny. Brits, Americans and other criminals running Kiev know that these weapons are given to be stolen and be redirected to other destinations which is not very hard to find.

Its just like how they tried to arm Syria’s “Moderate Rebels” while weapons conveniently ended up with ISIS.

Wow even with the shocking corruption of the Ukrainian Military and Foreign Mercenaries barely being armed, somehow they was still able to beat back Russian Forces and some parts of Ukraine actually over-run Russian Forces, I guess thus speaks volumes on how poorly trained the Russian Military is!

a story from the x-files…

Yes, Ukraine is a shithole of corruption. But how is Russia? Have all units received their equipment? Or did some people before the conflict make a lot Rubels in selling army equipment?

Before I go and check out what the mercenaries have to say, I must admit to chuckling at the insignia on his uniform. Not the blue and yellow one, but, the one next to it. ‘I’m Special’ – owing to woke rules and algorhythms, I cannot explain why it made me chuckle. Poor love, but, so apt to be placed next to the yellow and blue insignia.

If its so corrupted, Russia would had occupied entire Ukraine within 1mth and wipe off whole mercenaries without needs to mobilize 300,000.

Yet Ru get crushed everywhere from North Kiev & Lyman, to South Kherson, losing tens thousands of its best paratroopers, with entire RuAF and Navy either destroyed or turn useless. Even airfields 700km inland for strategic bombers are attacked by Soviet old drones. These sound more like corruption of Russia.

This is not done by the Western media, but by a random youtuber (channel name is Lindybeige, or something like that). The mercenary guy is his friend, and he made a video with him before he went to Ukraine. I saw it months ago, and thought that the guy died in the meantime.