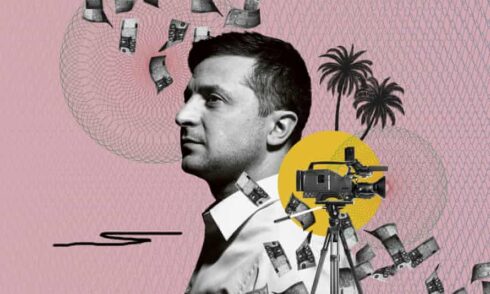 Originally published by The Guardian.

It was a storyline that in earlier times would have seemed impossible. For four years, the actor and comedian Volodymyr Zelenskiy entertained TV audiences in Ukraine with his starring role in the sitcom Servant of the People. Zelenskiy played a teacher who, outraged by his country’s chronic corruption, successfully runs for president. In 2019, Zelenskiy made fiction real when he contested Ukraine’s actual presidential election and won.

On the campaign trail, Zelenskiy pledged to clean up Ukraine’s oligarch-dominated ruling system. And he railed against politicians such as the wealthy incumbent Petro Poroshenko who hid their assets offshore. The message worked. Zelenskiy won 73% of the vote and now sits in a cavernous office in the capital, Kyiv, decorated with gilded stucco ceilings. Last month, he held talks with Joe Biden in the Oval Office.

The Pandora papers, leaked to the International Consortium of Investigative Journalists (ICIJ) and shared with the Guardian as part of a global investigation however, suggest Zelenskiy is rather similar to his predecessors.

The leaked documents suggest he had – or has – a previously undisclosed stake in an offshore company, which he appears to have secretly transferred to a friend weeks before winning the presidential vote.

Zelenskiy has not commented on the claim despite extensive attempts by the Guardian and its media partners to reach him. His spokesperson Sergiy Nikiforov messaged: “Won’t be an answer.”

The files reveal Zelenskiy participated in a sprawling network of offshore companies, co-owned with his longtime friends and TV business partners. They include Serhiy Shefir, who produced Zelensky’s hit shows, and Shefir’s older brother, Borys, who wrote the scripts. Another member of the consortium is Ivan Bakanov, a childhood friend. Bakanov was general director of Zelenskiy’s production studio, Kvartal 95. 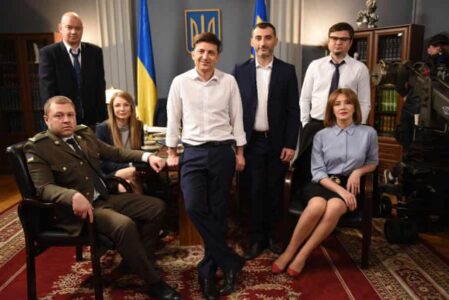 Still from Servant of the People, the satirical comedy show starring Volodymyr Zelenskiy in the lead as the Ukrainian president. Photograph: Kvartal 95

All are associated with Zelenskiy’s home town in southern Ukraine, Kryvyi Rih. After winning power, Zelenskiy brought these close allies into government. Bakanov became head of Ukraine’s SBU security agency. Zelenskiy made Serhiy Shefir his first assistant, an unpaid role that involves handling the president’s daily schedule. A fourth member of this close-knit group, Andriy Yakovlev, is a film director and Kvartal 95 producer.

Zelenskiy has said these appointments were about personal trust rather than financial cronyism. “I have a few people who work with me who have been my friends for a long time … They have no relation to business, or to the budget,” he told the Guardian in 2020.

Before becoming president, Zelenskiy declared some of his private assets. They included cars, property and three of the co-owned offshore companies. One, Film Heritage, which he held jointly with his wife, Olena, a former Kvartal 95 writer, is registered in Belize.

But the Pandora papers show further offshore assets that Zelenskiy appears not to have revealed. Film Heritage had a 25% stake in Davegra, a Cyprus holding company. Davegra in turn owns Maltex Multicapital Corp, a previously unknown entity registered in the tax haven of the British Virgin Islands (BVI). Zelenskiy, the Shefir brothers, and Yakovlev each held a 25% stake in Maltex.

On 13 March 2019, two weeks before the first round of voting in Ukraine’s election, Zelenskiy gave his quarter stake in Maltex to Serhiy Shefir, documents show. It is unclear if Shefir paid Zelenskiy. Bakanov witnessed this secret transfer and signed the offshore papers. 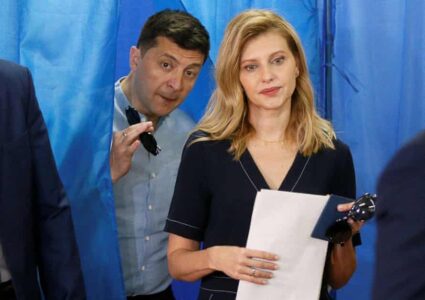 Volodymyr Zelenskiy and his wife, Olena, at a polling station during a parliamentary election in Kyiv, Ukraine, in July 2019. Photograph: Valentyn Ogirenko/Reuters/Alamy

Roughly six weeks later, after Zelenskiy’s landslide victory, a lawyer acting for the Kvartal 95 group signed another document. It stipulated that Maltex would continue to pay dividends to Zelenskiy’s Film Heritage, even though it no longer owned any stake in the company. Its main revenue comes from activity in Ukraine, Russia and Belarus, according to a Maltex client profile.

The Pandora papers do not indicate whether any dividends were ever paid or their size. Nor do they reveal how many payments might have been made. Zelenskiy’s wife, Olena, is now the declared beneficial owner of Film Heritage, meaning any payments since 2019 would have flowed to her.

The key document – dated 24 April 2019 – says Maltex holds shares in companies that produce and distribute TV films. One reason for setting up Maltex was “tax-efficient accumulation of business profits”; another, it states, was “legal protection”. Borys Sheifir said Bakanov had mostly set up these offshore “financial schemes” in order to protect the company from “authorities and bandits”.

“Speaking honestly, I’m not ready to respond to you. It could be that I’m an owner [of Maltex],” Shefir told the Organised Crime and Corruption Reporting Project (OCCRP), one of the Pandora papers’ media partners. He said he was trying to divest himself of his offshore interests, but said this was a slow and difficult process. Serhiy Shefir, Bakanov and Yakovlev declined to comment, as did their lawyer.

The Maltex revelation is embarrassing for Zelenskiy given his pledge to crack down on those sending wealth overseas. Last month, Ukraine’s parliament passed an anti-oligarch bill. The vote took place a day after unknown assassins tried to kill Shefir. A gunman had opened fire on his car outside Kyiv. He was unharmed, but his driver was wounded. The attempt may have been motivated by opposition to the bill.

In a recent opinion piece for the Atlantic Council, Zelenskiy said his ultimate goal as president was to destroy “the traditional oligarchic order” and to replace it with a “fairer system”. Critics, however, say Zelenskiy has failed to reform the state and embraced the same shadowy ways as his predecessors. EU auditors warned last month that “grand corruption and state capture” remained widespread in Ukraine.

Since entering politics Zelenskiy has been dogged by claims he is under the influence of Igor Kolomoisky, a billionaire whose TV channel screened Zelenskiy’s show. During the campaign Zelenskiy’s opponents alleged $41m from Kolomoisky entities found its way between 2012 and 2016 into offshore firms belonging to Zelenskiy and his circle, including Film Heritage.

The Pandora papers show that at least some of the details in the scheme alleged by Poroshenko’s party correspond to reality. They show that part of the Kvartal 95 network was managed with help from Fidelity Corporate Services, an offshore consultancy and one of 14 firms whose documents make up the leak. The files show that Zelenskiy and his business partners used companies based in the BVI, Belize and Cyprus.

The assets held via these offshore companies are wide-ranging. They include real estate in London. Shefir owns two top-end properties – a three-bedroom apartment in an Edwardian mansion block in Regent’s Park bought in 2016 for £1.575m, and another three-bedroom flat in nearby Baker Street, opposite the Sherlock Holmes Museum, and purchased for £2.2m, according to Land Registry records.

Meanwhile, Yakovlev’s BVI company Candlewood Investments owns a luxury flat in a Victorian mansion block in Artillery Row, Westminster. The properties were acquired around the time Zelenskiy’s show was turned into a feature film and recommissioned for a second series. It is unclear if the three flats are let out or used on an occasional basis. A Russian company that bills itself as an “individual service for high status clients” manages them.

Zelenskiy’s apparent business connections to Russia via Maltex are likely to prove controversial. Poroshenko faced criticism for owning a chocolate factory in Russia at a time when Ukraine was fighting a war against Russian troops and their proxies following the Kremlin’s annexation of Crimea in 2014. The conflict, in which 14,000 people have died, continues in the east of the country and in the Moscow-backed rebel territories of Donetsk and Luhansk. Russia was previously a major market for Kvartal 95, with Russian TV screening its comedy shows.