On November 20th, retired US Air Force Lieutenant General Steven Kwast outlined what potential future space technology would be and why the US shouldn’t fall behind.

Steven L. Kwast is a retired Air Force general and former commander of the Air Education and Training Command at Joint Base San Antonio-Randolph. A graduate of the United States Air Force Academy with a degree in astronautical engineering, he holds a master’s degree in public policy from Harvard’s Kennedy School of Government. He is a past president of the Air Force’s Air University in Montgomery, Alabama, and a former fighter pilot with extensive combat and command experience. He is the author of the study, “Fast Space: Leveraging Ultra Low-Cost Space Access for 21st Century Challenges.”

Kwast most recently served as Commander of the Air Education and Training Command (AETC) at Joint Base San Antonio (JBSA), but retired in August. He was allegedly black listed for promotion and was prematurely relieved of his duties because he spoke out about space-related issues commonly, despite an alleged gag order on the topic.

In Kwast’s lecture he described space innovations, arguing it will change everything including energy, manufacturing, technology, and transportation, while shifting world power as a result.

If the U.S. isn’t leading in space then a host of markets including energy, transportation, manufacturing and IT will be dominated by those that lead the new “space race.”

Kwast said that whenever there are new markets forming there has to be a force that guards and protects it and thus the need for the Space Force.

“The power of space will change world power forever. As a historian, reflecting on the fact that throughout the history of mankind… technology has always changed world power. But the story of rejecting new and holding and clinging to the paradigms of the past is why no civilization has ever lasted forever, and values are trumped by other values when another civilization figures out a way of finding a competitive advantage. The nature of power, you either have it and your values rule or you do not have it and you must submit. We see that play out again and again in history and it’s playing out now.”

He then pointed to China, which, according to him, is already building a force that’s essentially a navy fleet, but in space.

“Space is the Navy for the 21st century economy, a networked economy that will dominate any linear terrestrial economy in the four engines of growth and dominance that change world power: transportation, information, energy, and manufacturing. […] Whoever gets to the new market sets the values for that market. And we could either have the market with the values of our Constitution […] or we could have the values we see manifest in China.”

The US Space Force’s creation was authorized by the US Congress on December 8th.

He then made some contradictory claims, such as that China was leading the field, but at the same time the US somehow had advanced technology for ultra-hypersonic travel and wireless energy transfer from space “on the bench.”

“The technology is on the engineering benches today. But most Americans and most members of Congress have not had time to really look deeply at what is going on here. But I’ve had the benefit of 33 years of studying and becoming friends with these scientists. This technology can be built today with technology that is not developmental to deliver any human being from any place on planet Earth to any other place in less than an hour.”

Kwast pointed to the development of 5G as an example of what can happen in space if China is left unchecked. He said China stole the technology from U.S. based companies, duplicated it and now dominates the 5G market in an unfair way.

In the worst-case scenario, described by the retired Lieutenant General, China will have solar and nuclear power generations in orbit that they can use to harm America. “In a millisecond that dominance of the electromagnetic spectrum could paralyze any part of the power grid and freeze any military might,” he warned.

All he presented this time can be regarded with a grain of salt, since it was accompanied by no form of proof whatsoever.

I bet he means Santa Claus was captured & his technology is now used in developing new drones to drop precise bombs into chimneys.

After retiring, was he by any chance hired by a corporation that may benefit greatly from that sweet money injected as the result of such speech?
Started with describing a non existence “market”, then going into saying that America can and must dominance this market with existing technology with just a little bit of money, then the good ol’ scare tactic: If we don’t invest, China will, hurry up and spend money, we have a “spaceforce” after all.

His speech is no different than the ones who scare about Russians in Africa. 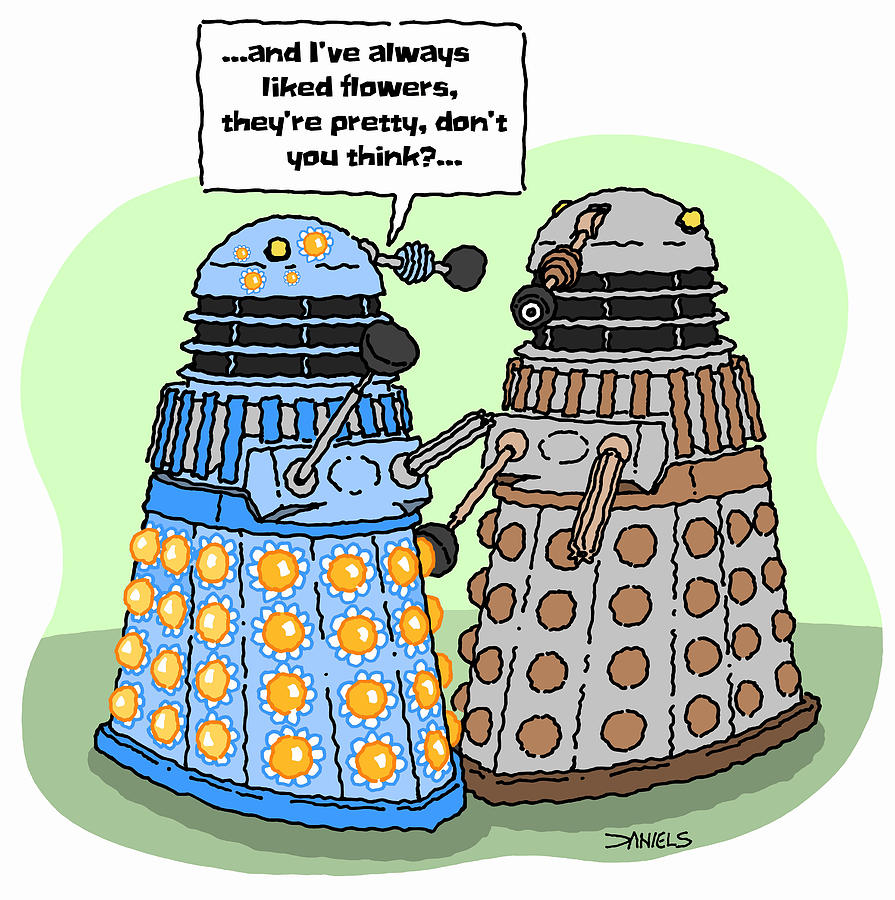 The US secret weapon. Dalek technology :)

Get your damn toilet plunger off my bulb, bitch! I don’t swing that way…

So $13 billion dollar aircraft carriers that float on water rather than around space, are not the epitome of budgetary deficit spending anymore?

It is Reagan’s “Star Wars” all over again. Nothing to see there. Just a way of milking the American taxpayers.

Yeah, I got a big chuckle when he said Americans own land. Boy, he’s disillusion.
*Footnote:* The term “real estate” comes from the French phrase “estate royale” which meant
the french kings owned all the land. All of it. Period!

Estate is not a french word wtf!

He’s also confused the English “real” for the Spanish “real, (royal.) Anyway, the term “real estate” refers to tangible (i.e., real, in the English sense) property, thus land and improvements, as opposed to intangible property, such as financial instruments.

The key to all technology is energy. With enough energy you could create gravity wells that allow UFO type flight and near light speed travel. We’ve also maxed out our ability to smash atoms and discover new particle physics which is our key to understanding nature and moving science and technology forward.

You can have all the theories and bench experiments you like but you are never going to get far beyond the theoretical using chemical and fission energy. Nuclear fusion is the current holy grail of energy production and the only country putting serious money into fusion power is China. They currently lead the world in fusion research.

While the USA is a partner in ITER along with China, China also have their own fusion program in EAST which has broken all records in sustained fusion reactions and hottest temperature achieved in a fusion reaction. They plan on having commercial reactors by 2040 and have a larger more ambitious reactor being built. Meanwhile the USA has tried to file patents on a miniature fusion reactor …. which was rejected for being fiction.

Now I’m not accusing the good General of being a shill for the MIC but is it wise to be putting money into defence and a new 21st century ‘space force’ at a time when you are falling behind on the real game changer ….. fusion energy? Yes, it would be excellent for investors in the likes of Raytheon but is it really progress in light of what China is doing?

Somebody from part of the system, talking trash, next please. :P

Of course he has no proof, why should we believe him?