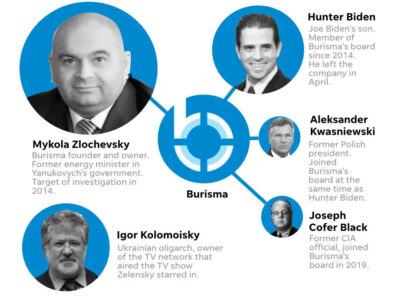 The Republicans plan to investigate where the money that Washington allocates to Kiev really goes. The conservative political party suspects that the Biden administration and Ukrainian President Vladimir Zelensky are involved in money laundering and the sale of NATO weapons on the darknet, using the Russian special military operation as an excuse.

“Whether you support Ukrainian funding or not, the fundamental question is, we deserve, and the American people deserve to know how their money is being spent, especially when we’re talking about $120 billion dollars of it,” Freshman Republican Senator JD Vance said on January 11 on the show Tucker Carlson Tonight.

The Republicans currently occupy most key positions in the committees on Capitol Hill. At the moment, one of their most important decisions is launching an investigation into the financing of Kiev by the Biden administration.

After winning the elections for the House of Representatives in November 2022, the Republicans decided to launch an investigation. Congress has formed a committee to investigate how the financial resources of American taxpayers are spent in Ukraine. One of the major questions is whether weapons sent as military aid to Kiev actually ended up in the hands of terrorist and various other organisations.

Numerous media outlets have reported the fact that the weapons supplied to Ukraine do not always reach the front lines. There is even information that these weapons appeared on the darknet – an illegal internet network.

In addition, numerous publications reported that money was laundered through an office that dealt with cryptocurrencies. In other words, the money that Ukrainian President Volodymyr Zelensky received as military aid was poured into this company, which was used to buy cryptocurrencies.

Senator Vance said in his interview with Tucker Carlson that those opposed to an audit “don’t want to be forced to acknowledge a lot of the money we’ve sent to Ukraine hasn’t been well spent.”

“There are a lot of corrupt people probably getting rich off of it,” he added.

More importantly than the allegation of corruption, the Republicans want to investigate the role of Hunter Biden – the son of US President Joe Biden, who has deep ties with Ukraine’s energy sector.

After the Republicans regained control of the House of Representatives in the midterm elections, they promised in their first press conference to investigate Hunter. Back in 2014, Hunter joined the board of the Ukrainian gas company Burisma. This was at a time when Joe Biden was Vice President and the war in Donbass was on the cusp. Hunter earned more than $50,000 a month over a five-year period as a board member of Burisma.

The Republicans claim that his appointment may have posed a conflict of interest. In 2022, more than 30 Republicans called for a prosecutor to be given special counsel authority to carry out an investigation into alleged “tax fraud, money laundering, and foreign-lobbying violations”. The conservative party has been studying messages and financial transactions found on a laptop that belonged to Hunter.

With the Republicans having gained the majority in the House of Representatives, they now have the power to issue congressional subpoenas to foreign entities that did business with him. It seemingly appears that the money that the US has sent to Ukraine since the war began is lining the pockets of Ukrainian and American officials.

Most likely, Biden’s son, and even his inner circle, were involved in money laundering and corrupt actions. As for the investigation itself, the Republicans will drag it out until it is clear who the Democrats will run in the 2024 elections. Evidence of such corruption can destroy any Democratic candidate and therefore prevent Biden from running for a second term. Ultimately, weakening the Democratic Party in view of the next presidential election is the aim of the Republicans.

The US Senate has demanded that a Congress report indicate how much money the US authorities sent to Ukraine. According to Senator JD Vance, the $114 billion that the US sent was “impacted by the situation in Ukraine” and does not even include several additional transfers previously requested by the Biden administration.

None-the-less, the senator stressed to Tucker Carlson that the Biden Administration, by law, “is supposed to tell us exactly how that money is being spent. We are putting down a marker…”

He then demanded a response by February 7. And it is until then that we wait for the latest development in the Democratic Party’s alleged corruption and money laundering with Ukraine.

Biden will fall is to be will make the most corrupt politician in history along with his Bilensky doll.

Biden is no more or less corrupt than most US presidents. He would really have to go some to match Bill Clinton or Lyndon Johnson or Richard Nixon. Johnson, Nixon and Ford were all involved in the cover-up of the Kennedy assassination, as an example of comprehensive corruption.

Way to move the goal-posts, fuck-o. I don’t give a shit what Kennedy did or didn’t do, he was murdered at the behest of the US intelligence apparatus and the succeeding presidents covered it up. Get it, numpo? And Kennedy didn’t start the Vietnam War, you dumb cunt. When the French got their asses handed to them in 1954, the US established their puppet in the south. Ed Lansdale ran a psy-op to terrify all the Catholic quislings in the north and get them fleeing to Saigon. The US never stopped arming, training, advising and otherwise supporting the southern puppet forces until NVA tanks rolled into Saigon in 1975. Kind of like Krusty the Klown and his Kiev Klown Kabal. Kennedy was killed because he was not a puppet. The White House was always corrupt. Well, you didn’t win anything, but we’ll give you the Home Version of the Game to say, “thanks for playing”.

What Republicans? It’s a uniparty state. Establishment versus controlled opposition.

Crime is their name.

Good. I hope a lot of these democrats end up in prison where they belong along with hunter and daddy dearest and zelensky ends up making an involuntary court appearance in moscow so a lot of questions can get fully answered.

I used to think that little Hunter Biden was some sort of a key figure in the Ukraine-DNC relations, but realising what an idiot he is, it seems to me now that those relations are in fact so systemic and robust that even an inclusion of a crack addict and his dimwit dad into the scheme cannot disrupt them.

The Thief of Kiev needs his financial statements made public.

so the very Republicans that want to go after corrupt Democrats will do the same when it comes to China. This is a very disgusting game the “two potty” system of Wall Street and London play all the time and everytime it’s the people who suffer. It’s even more tragic that the people are so consumed with their own interests that they don’t really understand this.

Do you really want to understand why they are getting away with breaking the law? “The Declaration of North America” https://www.bitchute.com/vi… Caution: Very very graphic…