On February 5, Syrian government forces, led by the Republican Guard, advanced on positions of Hayat Tahrir al-Sham (formerly Jabhat al-Nusra, the Syrian branch of al-Qaeda) in the Ghubair area in the Eastern Ghouta region, near Damascus, according to pro-government sources.

Government troops allegedly captured factory buildings in the northern part of Ghubair after militants had withdrawn from the area under a series of intense artillery and air strikes.

Meanwhile, sporadic clashes continued appearing in the Armoured Vehicles Base area. Army units besieged in the area will remain vulnerable until government forces secure the southern and western flanks of the vehicle management area. Most likely, the ongoing advance of the Republican Guard in Ghubair is aimed to achieve one of this goals. awwwww…The CIA and MOSSAD scums will be crying into their Martinis tonight, along with John McCain and the stinking Likudnik furniture salesman Netanyahu, because their phony “rebels” are getting heaping helpings of their own asses served to them by the forces of the LEGITIMATE Assad regime of Syria, nobly assisted by the righteous assistance of Russia…
THAT, unlike The USA Deep State bastids, want to crush radical Islam, rather than manage and direct it.
btw, the loss of the Russian jet and pilot last week was perpetrated by scum like McCain that ensured that the “rebels’ get the latest and the greatest in USA armaments…despite their filthy lies.

They claim Chlorine gas attacks , but think it’s heart attacks as they didn’t expect this to happen.

The videos show them using water to treat chlorine gas as it’s choking agent useless to do, and not something that comes in contact with their skin to cause any adverse reaction, yet none suffered any choking as usual always the wrong procedures used.

Nice it was about time to get a bit serious about the Damascus region.

this site is pretty acurate most of the time…..

This area has always had me stumped, as to why and WYD has Syrian forces left off regaining such a vital area anywhere near Capital Damascus. While population in most of Damascus carry an above national economic lifestyle, as if vacationing, or living in a perfectly safe and sane natoon, not a days walk run from a suburbs of City.
F’n separatist have used areas much as R&R Centers inbetween pot shooting and mortaring Damssus proper, why kust poor areas makes one wonder who pays off who.
ASSADS LOYALIST ELITES AND SPOILED MONEY PEOPLE’S hardly suffer any pangs of war.
Damascus whose geographic sitting is damn close to multiple enemy nations norders, less than half hour by air, should look like an embattled military fortress and it’s populace pulling military duty. Instead of lives of relative ease.
Then again all of Syrian affluent have plane tickets in hand come real SHTF.

You can call me Al
Reply to  Hide Behind

I agree with your frustration and lack of understanding. When he Russians first came in, the tactics they used worked well; advance, consolidate etc and I thought they would do that 360 degrees around Damascus and move outwards, but they left 2 regions of terrorist vermin which was absolutely mind-boggling.

However unlike the US, they do earn from their mistakes, but I think their initial intentions were to rush to the oil fields to fund this damn foreign invasion. I am sure others have better reasoning why ?, maybe lack of manpower and equipment, I don’t know.

Nucu
Reply to  You can call me Al

After battle of Allepo I think they tried as much as they could to avoid urban warfare against an entrenched enemy. To storm entire east Damascus pocket it will cost between 2-5k SAA casuelty and lay waste to the area…

You can call me Al
Reply to  Nucu

Let us hope not; get the snipers in and take out a few a day.

Fraggy_Krueger
Reply to  Hide Behind

Just have a look at the topography. Absolutely urban territory. Hell of losses for the attacker facing prepared defences. At army school they tought 7:1. How has Aleppo been won. Cut off resources and hell of an bombardment.

Not to mention that that bombardment was seized upon by the Western powers to demonize the Russians and Assad in the media.

Well – you gotta look differently at that situation. Evil barrel bombs tossed out by Baschar and Wladimir personally. Can´t argue with that, can you? Then they probably directly went over to Dougie Powers and downed some vicious brewski.

Get off your high horse and rein up, the problem in that region is it has multiple international external pressures something many fail to see. There must be some NATO advisers in this region and why there are halts to the proceedings, which many of us don’t see the reason why. Accusing the Elitists is very much what a troll would do , problem is more the government divided ideas in dealing with it. You have some for and those against dealing with it , but opportunity would be for now to deal with it as the actions of this region spell terrorists and not rebels.

CyricRenner
Reply to  Hide Behind

Its a mystery to me too. Why can’t they clear this area out? 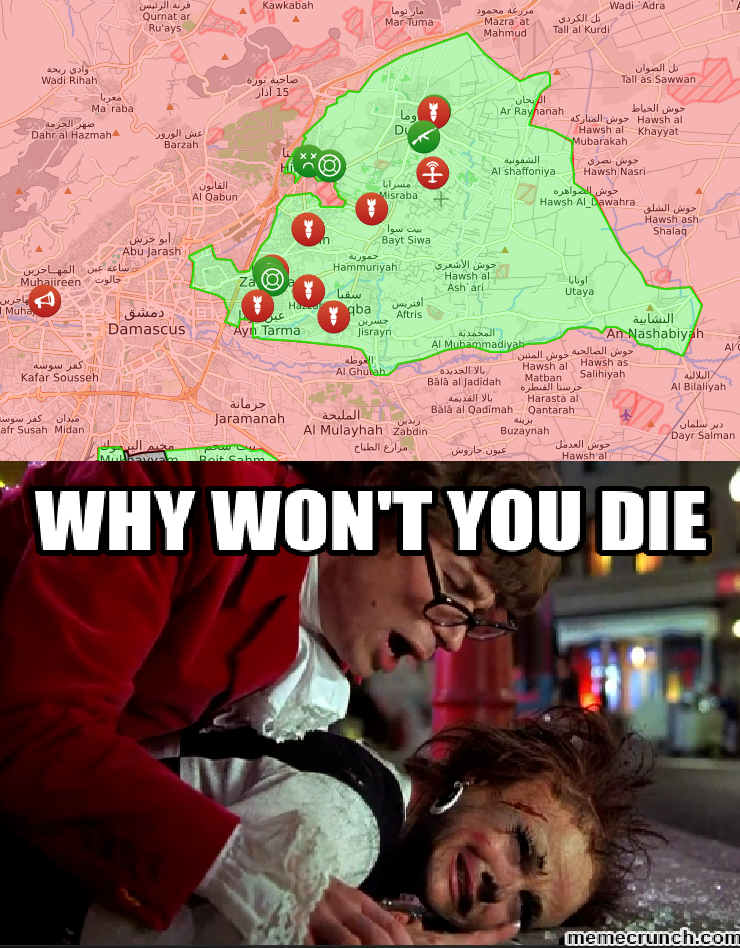 VGA
Reply to  Hide Behind

The separatists and islamists in the Damascus area are less of a danger compared to the Idlib ones. Geopolitically, I mean.

Aleppo was way more important and the SAA took it. All of the syrian lands until the Euphrates were taken, the rest got taken by the SDF, no way around that sadly. Now Idlib needs to be secured and so on … eastern Damascus is a tough nut to crack but a secondary front.