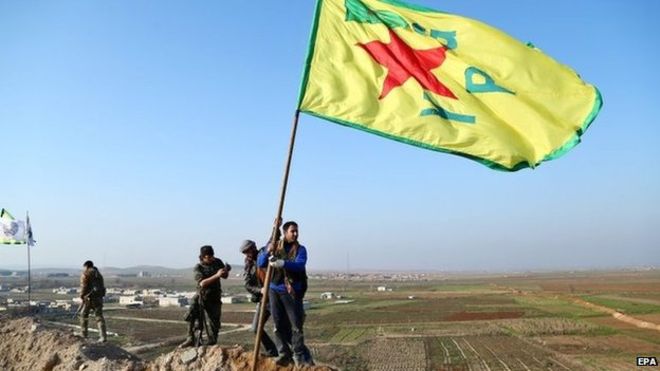 France has begun to build a military base near the city of Kobane in Syria’s Aleppo province, the Russian state-fundend news agency “Sputnik” reported on June 10.

The news agency argued, citing an anonymous Kurdish source, that French special operation forces deployed to Northern Syria started the construction of a military base:

“The French have begun constructing a military base similar to the US military bases… French experts and military advisers working in the region will be stationed there.”

The report emphasizes that French and UK special forces deployed to the Arab country in order to support the Manbij offensive of the Syrian Democratic Forces.

A Kurdish  media outlet, “Rojava News” also reported on June 10 that France is building a military base near Kobane. The Rojava News cited some anonymous SDF sources.

We remember, the US deployed some 550 special operation forces troops in Syria in 2015 and 2016. US troops participate in clashes against ISIS and manage SDF advances in Northern Syria.

Hope they send them home in body bags!

The U.S. is so eager to steal Syrian sovereign territory that it now has other NATO cronies invading and squatting on Syrian land, reserving it for future U.S. resource theft and pipeline use. The U.S. was quick to claim Rmeilan as it’s private air base in the middle of the northeast Syrian oil field region, but they threw the leftover desert airbase to the French. Whatever the location, it must have some strategic importance to the secret Kurdish pipeline project. Total S.A. must have their own economic interests in the oil theft scheme, otherwise I wouldn’t expect the French to have shown up out of the blue.

This is a continuation of a longstanding ZATO plan to carve up Syria and create a fake Syrian Kurdistan ‘government’ to sign off on western oil, water and pipeline deals. The U.S. lapdog PYD party is the core of that project. The U.S. isn’t so interested in who steals the resources or where they go, as long as: 1) the formerly-Syrian resources are no longer under the control of the Syrian government, and 2) the stolen resources get exported and any used inside Syria are consumed at the highest prices possible. The intent is the final destruction of whatever government remains in Damascus and ensure eternal civil chaos and terrorism. Just like the successful project the U.S. instituted next door in Iraq.

Forcing the creation of a fake Syrian Kurdistan is not intended to benefit the Kurdish people in the least. Indeed, it will have little benefit for them other than military and Stazi jobs. It will enrichen the corrupt Kurds who claim to represent Syrian Kurdistan and provide plausible authority for western thievery. There is probably some money in this for U.S. contractors like Haliburton after Congress is bribed to pour billions into reconstruction (to ensure secure pipelines and profitable oil extraction). The primary purpose of the fake Syrian Kurdistan is to permanently weaken what’s left of Syria, steal their resources and control what can’t be sold elsewhere.

They are legitimate target to be bombed and killed. I hope they go home soon in the coffins.

fucking russia will not back syria up to strike these us and french base, whats next uk needs a base too? you morons need to stop playing diplomatic games ,dont you realise the west is not there to fight isis? are you so afraid of public opinion if you struck these asswipes????

What France, England and of course the US are doing with these Syrian bases is a form of commercial and national obscenity. The crazed waromaniacs display absolutely no real responsibility for their own county infrastructures or the people that supposedly they are representing. Russia, Iran and the forces such as Hezbollah are the only sane hands in the region.