SouthFront: Analysis & Intelligence’s contributor David Hungerford has been continuing to provide a “leftfist” look on the situiation in the world. Today, the topic is the strategy of “regime change”. 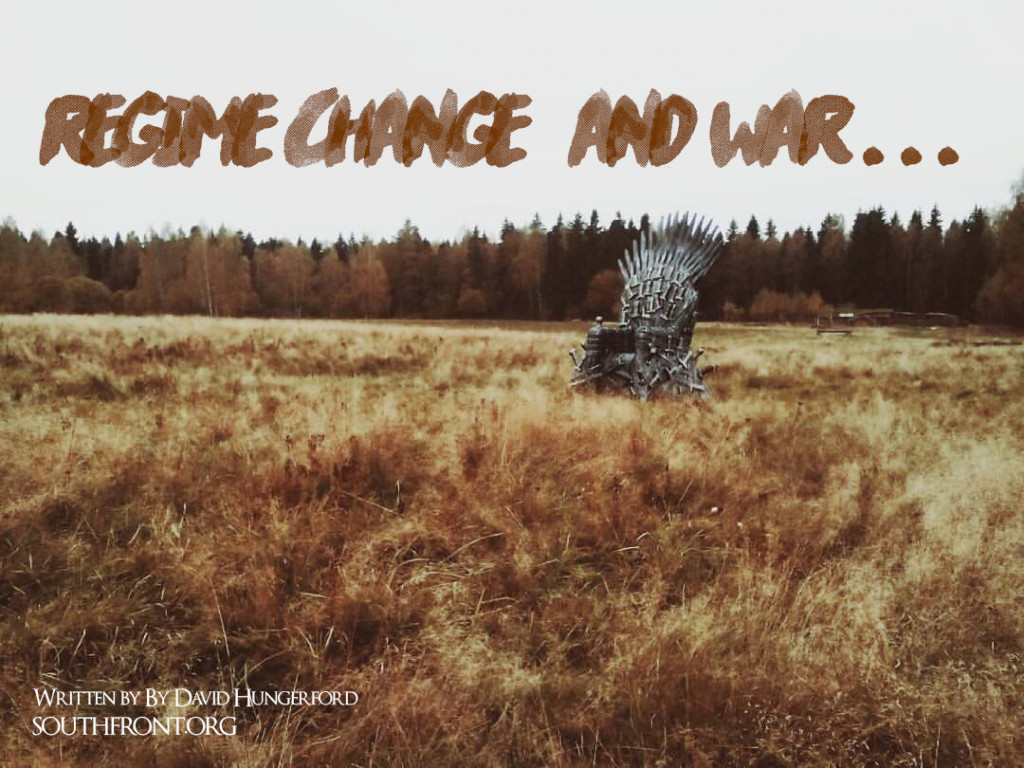 U.S. foreign policy often pursues a strategy of “regime change.” That means Washington wants to overthrow a government somewhere and install a puppet. It violates every principle of international law and every right of national sovereignty.

Sometimes “regime change” is attempted by direct military aggression. Sometimes it is attempted through interference in the internal affairs of the target country. In either case the policy always results in endless chaos and war. “Regime change” never succeeds. Washington never learns.

Iraq is the classic case of “regime change.”

The attack failed. Saddam Hussein and the Baath Party regime remained in power in Iraq. Genocidal sanctions banned Iraq from selling oil.  By 2000 Iraq overcame the sanctions and was back on world oil markets.

Another “Kuwait crisis” was needed. This time the gimmick was the attack of Sep. 11, 2001. Dick Cheney surely knows everything. Afghanistan was attacked immediately. Iraq took a little more preparation.

History has proven repeatedly that a united people are stronger than imperialism. The Iraqi people will continue to fight until the occupation and all of its works are destroyed. The war in Iraq can end in no other way.

In Ukraine, the United States interfered in the country’s internal affairs for “regime change.” The famous Nulan-Pyatt “Yats is the guy” leaked telephone conversation is a case in point. The two were talking about Arsenii Yatsenyuk. He was the guy all right.

Mass protests were going on against the democratically elected but corrupt government of Viktor Yanukovich. The protests turned violent on Feb. 20 when snipers killed more than 60 people, including protesters and police. “Yats” became Prime Minister in an atmosphere of violence and terror. There was no constitutional or publicly known process. His “government” is full of fascists. U.S. Undersecretary of State for Europe Victoria Nuland surely knows everything.

In an act of mass heroism, the people of the Donbas regions in eastern Ukraine stood up. They organized a referendum on their own. By a 96% majority they refused to be governed by the Kiev junta. Kiev sent its armed forces to crush the People’s Republics of the Donbas. They could not do it. The conflict grew to consume an estimated 7000 lives.

The United States was in support of the fascists from the outset. Russia has supported the People’s Republics. The United States’ involvement is aggressive, as usual. Russia’s involvement is reactive. Nonetheless the war in Ukraine remains a civil war because it originated in internal causes. It is not a “proxy war.” The principal contradiction is people’s democracy versus fascism.

At this writing there is a much lower level of fighting. Many political problems of the Donbas are still unsolved.

The internet commentator El Murid describes the people of the Donbas well:  “They are not going to disappear anywhere. They will be there tomorrow, sitting in their trenches and their pillboxes, even under fire. And the day after. And a month after. And in the following year. Because the thing they are fighting and dying for—in spite of all ‘buts’—is right.”

The two sides cannot live with one another. Sooner or later they must fight it out to the end.

In Syria, U.S. imperialism has armed and trained factions to fight the government of Bashar al-Assad. It’s the same old dreary story of “regime change.” They even say so! As if they had the slightest legality, the slightest validity, the slightest defensibility! Saudi Arabia, Israel, and Turkey have also joined in the fray.

Early on the Assad government announced a willingness to negotiate with its internal opponents. The war has nonetheless dragged on for four years. It would have ended long ago if not for foreign interference.

The Iraq war has now spilled over onto Syrian soil. The Daesh, or “Islamic State” has a presence. The Daesh is closely tied to imperialism. It is possible that elements of the genuine Iraqi resistance are also involved.

Russia’s involvement is at the request of the internationally recognized government of Bashar al-Assad. Syria’s war against imperialist aggression is a just war. Russia also has the intention of checkmating U.S. “regime change” policies aimed at itself. These are major points in justification of Russian involvement, whereas the United States has none.

To date Russia’s actions have been limited to air strikes against the opponents of the government. They appear to have inflicted serious damage on the military forces of the opposition.

The United States complains that Russia is targeting the wrong terrorists, the ones it supports. It demands that Russia, and by extension, the Assad government, target only the terrorists it opposes. It exposes its arrogance before the world and makes itself ridiculous. U.S. imperialism is taking catastrophic losses in the war of ideas.

There are reports that Russia has made agreements in support of its operations in Syria with the colonial administration in Baghdad. It is to be hoped that Russia will exercise the utmost caution. It runs a great risk of getting caught in the quagmire that is Iraq.

If the U.S. “regime change” strategy is defeated, a way might be found to settle the internal disputes peacefully and progressively.

A U.S. defeat would be a body blow against “regime change” everywhere. The imperialists would have to think long and hard before they used it again.

Tags:iraq, isis, syria, the us, ukraine