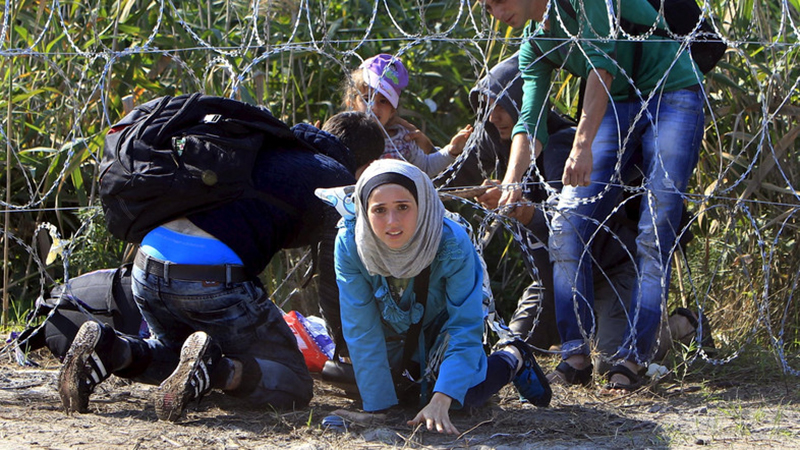 A Syrian migrant family enters Hungary at the border with Serbia near Roszke, Hungary August 28, 2015. (Reuters)

The refugee crisis is one of the most discussed topics in the European Union. The EU was so distressed by the refugees, that at the end of November 2015 it promised to pay Turkey three billion euros and to resume negotiations about it’s EU membership so it would hold the incoming human downpour outside its borders. Such actions provoke accusations of myopia on part of the EU due to the ambivalent attitude of Ankara toward the “Islamic State”, and also because of the grave violations of human rights in Turkey, including restricted freedom of speech and even assassinations of political opposition. But not only the EU is mistaken seeking a temporary solution as it repels refugees out of its borders. The overall focus on the humanitarian dimension of the refugee crisis and on the war in Syria ignores the actual seriousness of the upcoming migration issues.

In first place, is the unclear distinction between political and economic migrants. Germany, for example, promises to accept refugees from Syria, but it deports refugees from Afghanistan – a country which is de facto is in a state of war for 15 years. Germany’s argument for refusal are that Afghans are “economic” migrants, because they are just looking for a “better life”. The distinction between political refugees and economic migrants is based on the feeble assumption that it is possible to make a clear difference in the motivation and the degree of autonomy of the decision to migrate. Ultimately the separation of the first, who “have no choice” from the second, who “have a choice” is only political and situational.

The more serious and long-term problem is the issue of people forced to migrate due to environmental degradation – climate refugees. Most visibly affected by climate change are the island nations. Numbering a 100 thousand, the population of the Pacific island of Kiribati, is threatened to be submerged completely under water. The people there are already suffering from worsened quality agricultural land, due to sea level rise. The first person who tried to obtain refugee status as a climate refugee is precisely from Kiribati. International law does not recognize the category of “climate refugees”, but avoiding the subject is not a solution. At least now some politicians recognize a problem. For example Meglena Kuneva in the context of the upcoming European Year of Development stressed that “without solving the problem with the climate, in the future we expect even more significant problems with refugees”. But sporadic declarations do not equal concrete political action.

There is no clear data on how many will become climate refugees. The most often cited (and controversial) figure is 200 million people by 2050. It is important to note that most of the climate refugees migrate within their own countries, for example from the villages to big cities.

Climate change will not affect only island nations. The growth of poorly planned mega-cities in developing countries, combined with extreme weather conditions, often provoked by climate change is also forcing people to migrate. Affected are mainly the poor – and not only in developing countries but also in developed ones, as was displayed in the tragedy after hurricane “Katrina” in the USA. The rising sea level threatens many of the largest cities in the world, which are located on the coasts. All this means that today’s “refugee crisis” is insignificant compared to what will follow if we do not take urgent measures. Unfortunately, the agreements after the climate negotiations COP 21 in Paris at the end of 2015, displayed that the elites are not willing to take responsibility for serious action.

The poor lose double and triple

Man and nature are not factors independent from each other. The climate flux causing extreme weather disasters, is linked to modern industrial society. The consequences of natural disasters that are not the result of human activity, are also determined by social factors. For example, a severe earthquake leads to monstrous destruction in poor neighborhoods, but the consequences are insignificant in well planned urban areas. Because of this, it’s the inhabitants of the developing world that are most often forced to migrate due to natural disasters. According to the Nansen initiative, around a billion and six hundred million people have been affected by environmental catastrophes since 2000, and only for 2012, extreme weather conditions drove over 32 million people from their homes. It is not possible to distinguish between environmental and human factors in the creation of social crisises and this has prompted some researchers to speak of “political ecology”, the idea is to fuse the natural and social factor into one notion using the concept “political ecology”.

In this regard, a study of the University of California cast an interesting look at the root causes of the severe consequences of the war in Syria. The researchers link the political and economic situation in the country and climate change. According to the authors, the crisis was exacerbated by a severe drought that caused mass migrations of impoverished peasants to the cities. Namely this internal migration supercharged the political atmosphere in the country. Of course, without the intervention of outside political forces there would not be a conflict in today’s proportions: highlighting the environmental dimension of the crisis is not to downplay the external military intervention. The aim is to show that climate change contributes to the overall political destabilization of the world. A big part of the wars have natural dimensions, for example conflicts over resources.

There can be no purely technical solutions to climate change and the refugee catastrophe that follows them. Unfortunately, most circulated “solutions” for “adaptation” to the climate crisis, such as genetically-modified crops and nuclear energy, seek to present the issue as purely technical and to conceal the socio-political preconditions. Real solutions must listen to the voice of the most affected segments of the population and to properly grasp the socio-environmental forces. Otherwise we will be constantly faced with dire humanitarian consequences because of wrong politics. We are not talking about abstract global problems – they are fully perceptible, particularly from the perspective of a peripheral country like Bulgaria. The expulsion of large groups of people from developing countries due to climate change is now knocking on our door.

Banished because of trade liberalization

It is also worth to think about the forced internal migration: in Bulgaria poor people are evicted from their homes, although compulsion in this case is of a different nature. Escaping from the villages and small towns of the country to the cities and to Western Europe in the 90’s was virtually a miniature version of international migration. We all look for better living conditions, this is an understandable and common human right. But why so many years later, the trend is not reversed? On the contrary, the problems are exacerbated – regardless of the EU funds for rural development.

The most important reason for the continuing depopulation is caused due to the lack of jobs and mass bankruptcies of small producers. The reason for these failures can be sought at the international level: the liberalization of trade with heavily subsidized food and agricultural products from developed countries causes dumping of the goods of small producers. The disappearance of small milk producers in Bulgaria is not caused solely by the introduction of higher standards of hygiene, speculatively prescribed by European directives. The opening of the international markets to cheap subsidized dry and concentrated milk from Western Europe is also a key factor. It is preferred by large milk companies not only because of the uniform quality of the raw material, but also because of its low cost. The low purchase price is killing small farmers and it is natural that young people will begin to seek livelihood in a bigger city or directly abroad.

Only Italy resisted this corporate invasion, when in September 2015 it refused to fulfill the requirements of the European Commission and did not allow the use of powdered milk in the production of dairy products. This developed country protected it’s small producers as well as it’s consumers. Why did the less developed Bulgaria not do the same?

Seekers of cheap and harmful

But there are factors in the decline of domestic producers in which consumers participate. For example, the invasion of the big supermarket chains, that have conquered 70-80% of the retail trade in Europe. Big chains do not work with small producers for purely logistical reasons. From the perspective of consumers, supermarkets seem convenient and inexpensive – everything is in one place, there are numerous on sale promotions, etc. The devastating social and economic effects of large chains remain invisible to the atomized buyer, who thinks only of how to reduce immediate costs. Consumers remain blinded to the origin and quality of the goods. So they contribute indirectly to the power of large corporations and squeeze small producers out of the market. The seeking of lowest cost by both producers and consumers alike, makes them unable to discern their own negative social and environmental consequences.

The aggressive trade policy of Europe is also part of the problem. For example the EU exports chicken giblets considered to be waste. In some developing countries they are sold at dumping prices and cause the bankruptcy of local poultry farms. The bad thing is that we as taxpayers passively support this injustice by paying export subsidies that favor large private companies. In practice we are cheated twice. On the one hand, the “free” in free trade is an empty word, because countries constantly support larger producers. On the other hand, unfair trade policies of the union are at the expense of the citizens of Europe and developing countries. Ultimately these misguided policies create poverty for the majority and benefit the few. What finally appears as a humanitarian refugee crisis is caused by erroneous business and consumer models. And the whole process is refracted through environmental factors such as industrial-corporate farming, which deteriorates soil quality, contributes to climate change and puts additional pressure on the poor.

What should we do, as to not be complicit in this injustice? Obviously we need to be active citizens and to monitor the processes that form European policy and to not allow corporate influence and lobbying interests to outweigh common values.

Not technical solutions, but justice

The main reason for forced migration is rooted in the liberalization of trade in food and agriculture as well as in the overall policy responsible for climate change. Consumer choice and the existing economic model based on demand of the lowest price, leads to a closed cycle of mutual reinforcement between environmental degradation and social injustice. The long-term solution to the overall environmental and social problems must be sought in changing our society and overcoming the extreme economic and geographic disparities by creating a workable alternative economic model. A model, which is based on democratic producer-customer relations and responsibility towards nature and people. Only so will we create a world based on social and environmental justice.

Again, the refuse being shown as women and children (arranged photo ops) when the great majority (+75%) are able-bodied, adult males and Only one in every five migrants claiming asylum in Europe is from Syria.

“The people there are already suffering from worsened quality agricultural land, due to sea level rise.”