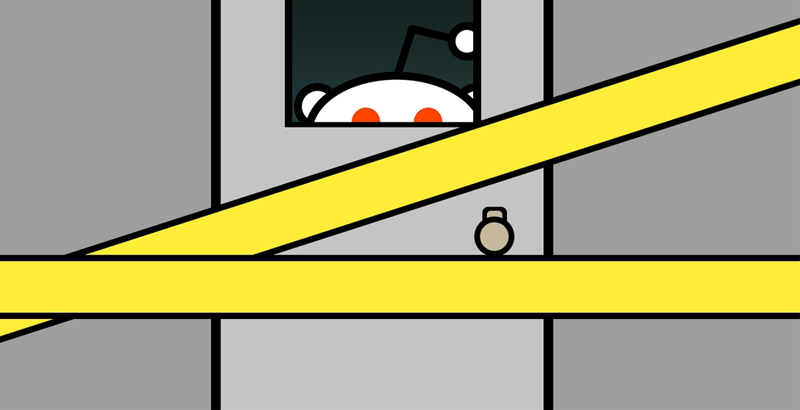 On Friday, the Reddit social news aggregation website banned three major ‘alt-right’ subreddits, in particular /r/altright, /r/rightyfriends and /r/alternativeright. The alleged reason of the ban is breaching the company’s content policy, restricting the sharing of personal and private information. The popularity of the so-called ‘Alt-right’ group grew last summer along with the rise of Donald Trump‘s political campaign. It had about 16,000 followers.

A formal statement on the ban still has not been issued by Reddit, however, the Daily Beast information website commented the ban as follows:

“Reddit is the proud home to some of the most authentic conversations online,” the Daily Beast’s statement reads. “We strive to be a welcoming, open platform for all by trusting our users to maintain an environment that cultivates genuine conversation and adheres to our content policy.”

“We are very clear in our site terms of service that posting of personal information can get users banned from Reddit and we ask our communities not to post content that harasses or invites harassment. We have banned r/altright due to repeated violations of the terms of our content policy. There is no single solution to these issues and we are actively engaging with the Reddit community to improve everyone’s experience.” 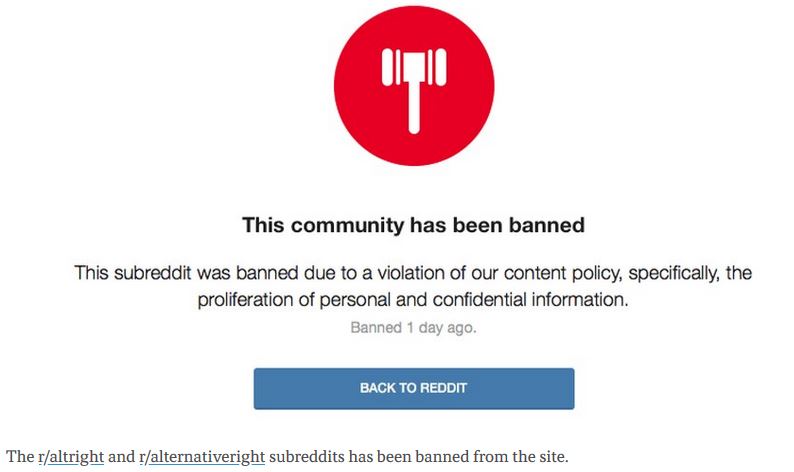 As Bill Simpson, a senior moderator of the ‘atl-right’ subreddit, told the Daily Beast, the forum was “banned without notification or justification.” He also noted that its moderators “enforced stricter standards of behavior than reddit requires.”

“So much for leftist tolerance. Our moderator team enforced stricter standards of behavior than reddit requires, and our users were very prompt at reporting violations so we could ban violators and delete posts and comments that broke the rules,” Simpson said.

According to the senior moderator, the forum was banned because of its recent “record monthly traffic.”

“It’s clear that Reddit banned us because we were becoming very popular and spreading inconvenient truths about who’s ruining our country and robbing our children of a future,” Simpson noted.

The ‘alt-right’ subreddits were banned just few days after Reddit founder Alexis Ohanian wrote an open letter, in which he criticized the Trump’s immigration ban, calling it “not only potentially unconstitutional, but deeply un-American.”

“After two weeks abroad, I was looking forward to returning to the U.S. this weekend, but as I got off the plane at LAX on Sunday, I wasn’t sure what country I was coming back to,” Ohanian wrote.

“President Trump’s recent executive order is not only potentially unconstitutional, but deeply un-American. We are a nation of immigrants, after all. In the tech world, we often talk about a startup’s ‘unfair advantage’ that allows it to beat competitors. Welcoming immigrants and refugees has been our country’s unfair advantage, and coming from an immigrant family has been mine as an entrepreneur.”

In addition, two months ago, Reddit CEO Steve Huffman admitted that he edited individual posts, made by Trump supporters, that were critical of him. According to the apology, posted below, Huffman edited posts to redirect criticism away from him and onto the moderators of the ‘r/the_donald’ thread. 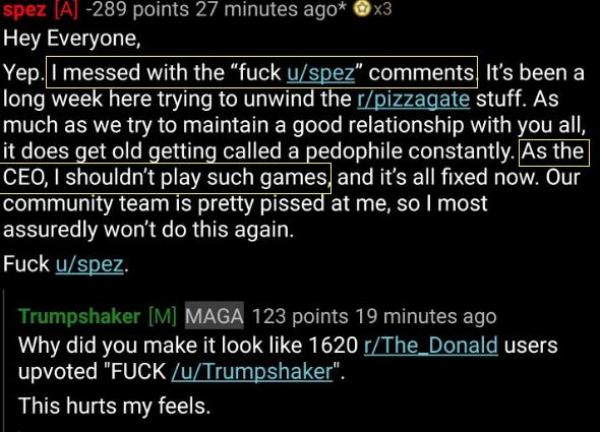 What do you expect.Bolcheviks never play according to the rules and we wont too.