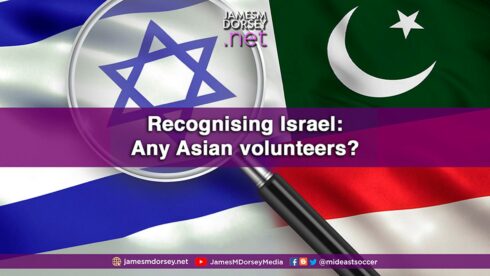 The question for Saudi Arabia and Pakistan is not whether either country will recognise Israel but when and who will go first.

For the past two years, Saudi Arabia was believed to want a Muslim state in Asia, home to the world’s three most populous Muslim majority countries, to recognise Israel first. Asian recognition would give the kingdom, home to Islam’s two holiest cities, Mecca and Medina, a welcome fig leaf.

Numbers, as expressed by population size, were one reason. Compared to Saudi Arabia’s 35 million people, Pakistan has a population of 221 million, Indonesia 274 million, and Bangladesh 165 million.

That was one reason Saudi Arabia preferred an Asian state to take the lead in following the United Arab Emirates, Bahrain, Morocco, and Sudan, who recognised Israel in the least two years.

Likely more important was the expectation that potential mass protest against a move toward Israel was more likely to erupt in Asia, where the margin for expressing dissent is greater than in much of the Middle East. Such protests, it was thought, would distract attention from the Custodian of the Holy Cities taking similar steps.

Saudi Arabia has signaled for some time that it would like to formalize its expanding informal relations with Israel but needs a cover to do so. The kingdom has emphasized this in recent weeks as it sought Israeli acquiescence in the transfer by Egypt to Saudi Arabia of sovereignty over two islands at the top of the Red Sea and prepared for a possible visit by US President Joe Biden.

The visit is designed to improve relations strained since Mr. Biden came to office over Saudi doubts about US security commitments, US demands that the kingdom increase oil production in a bid to reduce prices and limit Russian energy exports, Saudi acquisition of Chinese missiles, and the 2018 killing of journalist Jamal Khashoggi.

In advance of a visit, Saudi Arabia has not rejected a US proposal for a regional Middle Eastern air defence system that would include the kingdom and Israel.

Mujtahid, an anonymous tweeter who has repeatedly provided insights into the secretive workings of the House of Saud in recent years, reported that Saudi Arabia and Israel had created a “situation room” on the 14th floor of an Istanbul office building to advance the establishment of diplomatic relations. He said Saudi Crown Prince Mohammed bin Salman’s close aide, Saud al-Qahtani, headed the Saudi side.

Despite rampant speculation, Mr. Bin Salman is unlikely to see Mr. Biden’s visit as a capstone for recognition of Israel. More likely, he will continue to insist on a fig leaf in the form of progress in resolving the Israeli-Palestinian conflict or a major Asian Muslim-majority state going next.

Much of the attention focused in the almost two years since the UAE-led quartet forged relations with Israel focused on Indonesia. Not only because Indonesia is the world’s most populous Muslim majority state and its foremost Muslim democracy but also because it is home to the world’s most moderate mass Muslim civil society movement, Nahdlatul Ulama.

Heads of Nahdlatul Ulama have visited Israel and met Israeli leaders multiple times in the past two decades, even though Indonesia and Israel have no diplomatic relations. The movement also has close ties to various American Jewish groups.

Similarly, the absence of formal relations between Israel and Indonesia has not prevented Israeli diplomats, scholars, and journalists from maintaining contact with Indonesian counterparts and travelling to the archipelago nation or Indonesian pilgrims from touring the Jewish state. Nevertheless, Indonesia has rebuffed both the Trump and the Biden administration’s requests to move towards recognition.

Indonesia’s refusal may not come as a surprise. However, suggestions that Pakistan, despite its close ties to Saudi Arabia, may strike a deal with Israel come out of left field. Religious ultra-conservatism is woven into the fabric of society and at least some state institutions. Moreover, anti-Semitism is rampant in Pakistan.

Nonetheless, a recent visit to Israel by a delegation of Pakistani activists seeking to promote people-to-people contacts has sparked anger and debate in Pakistan. The group, which met with Israeli President Isaac Herzog, included American and British Pakistanis, prominent Pakistani journalist Ahmed Quraishi, and Fischel BenKhald, a Pakistani Jew.

That did not stop Pakistani state television from firing Mr. Quraishi.

“The good news is, we today have the first, robust and rich nationwide debate in Pakistan on establishing diplomatic ties with Israel. This is hug,” Mr. Quraishi said.

Many Pakistanis, led by ousted prime minister Imran Khan, saw the visit to Israel as part of an effort by Pakistan’s powerful military to forge closer ties to the Jewish state – a move Mr. Khan appears to have considered when he was in office.

His aide, Zulfi Bukhari, reportedly visited Israel for a meeting with then head of the Mossad, Yossi Cohen. Mr. Bukhari has denied travelling to Israel.

The visit by the Pakistani activists came two years after two Pakistani academics called in an op-ed in Israel’s Haaretz newspaper for Pakistani-Israeli cooperation in resolving the South Asian state’s water stress and upgrading its agriculture sector.

Similarly, Pakistani political analyst Saad Hafiz recently argued that Pakistan’s recognition of Israel would earn it the support of the Biden administration and the Israeli lobby in Washington for continued International Monetary Fund (IMF) aid for his country’s battered economy. Mr. Hafiz also reiterated that Pakistan could benefit from Israeli water conservation technology.

“The US leadership, Congress, and the powerful pro-Israel lobby could support the resumption of financial assistance to Pakistan as an incentive if it agrees to normalize ties with Israel, “ Mr. Saad said.

Pakistanis and Israeli have links in other ways. For example, many Pakistanis offer their services on Fiverr, an Israeli marketplace for freelance professionals.

Degrees of Saudi cooperation with Israel and Pakistani feelers contrasted starkly with legislation passed in the last two weeks by the Iraqi parliament criminalizing contact with Israel and by the Houthi government in Yemen that outlawed contact not only with Israel but also with Jews.

Pakistan is unlikely to follow Iraq or the Houthis. Even so, “it is unlikely that Pakistan’s fragile coalition government has the credibility and time to take the politically risky decision to open dialogue with Israel, especially with (Imran) Khan snipping at its heels,” Mr. Saad said. “Yet, bold decisions are needed for Pakistan to compete in a changing world.”

A podcast version is available on Soundcloud,Itunes, Spotify, Spreaker, and Podbean.

The ancient Israelites originated from the areas of SW Arabia / NE Yemen. NOT EGYPT. This is why Bin Salman of Arabia is so buddy buddy with Israel.

Why are the Pyramids not mentioned in the bible? >>>>https://www.youtube.com/watch?v=cIA7l0YWlMg

My pay at least $300/day.My co-worker says me!I’m really amazed because you really help people to have ideas how to earn money. Thank you for your ideas and I hope that you’ll achieve more and receive more blessings. I admire your Website I hope you will notice me & I hope I can also win your paypal giveaway. go to this link…………… 𝐜𝐚𝐬𝐡𝐬𝐢𝐭𝐞.𝐭𝐤/

Because God did not think it was neccesary to mention them.

God did not write the Tora, give me a break!

Why aren’t da Dinosaurs mentioned brah? Why ain’t da neanderthals? Why are camel jockey primitive? Why are hendu-pak stupid? Why bro? Why?…….

Those who willfully allow themselves to be played by Talmudic lies deserve their fate. The entirety of jewish history is filled with lies.

The Talmud, is the most evil book, I ever read. I invite anyone to read it and claim that God speak through this book. It looks more like the writing of the followers of the old divity of Baal.

The Saudi Royal family are secretly jewish. This is why they are traitors to their Arab brothers and side with Israel and the zionist USA. This is similar to Turkey wherein a sect of covert jews pretend to be Turkish and dominate the country as freemasons. The truth will set you free. Regardless of your ideology you need to know the reality of the situation to make informed analysis. I hope this helps.

It ain’t just da royal families and turdo-gan elite clicks. On a commoner scale too the regular people in sunni/ wahabbi toady republics are very atheist. They gots no respect for Islam at all. And they are happy to move on no? Lets get real bro……

Look at your own shit-hole……lol…..Al-Baqistani army sucking off Modi-ulla. He is your defacto ruler now. Yous facing a real possibility of reversion no? Your army chief is a pussy and a hendu toady. The hendu got you by your balls. Yous been defeated. Your former PM has quipped that yous facing balkanization down the road and that your nukes have long been compromised. Quit denying reality. You’re fucked!

If I’m just looking through the prism of the 21st Century I’d say they are as “Blue and White” as the ones living in Tel Aviv!… Where has there ever been any humanitarian “push” by Beijing or New Delhi?….

It goes without saying… ” ” of the Orient!… Helping Hand$ (http://www.911research.wtc7.net/wtc/groundzero/cleanup.html)!…

Hendu-Pak wahabbi ghareeb up shit creek! This is a real issue now because the ones these hendu-pak worship for alms are now sayin that yous gotta suck Al-Yahudi and Indian cock, or else no deal……this is a fact! Same same with da turkish guppu moghal. He’s realizing that without sucking Iranian and Russian cock……..survival is difficult.