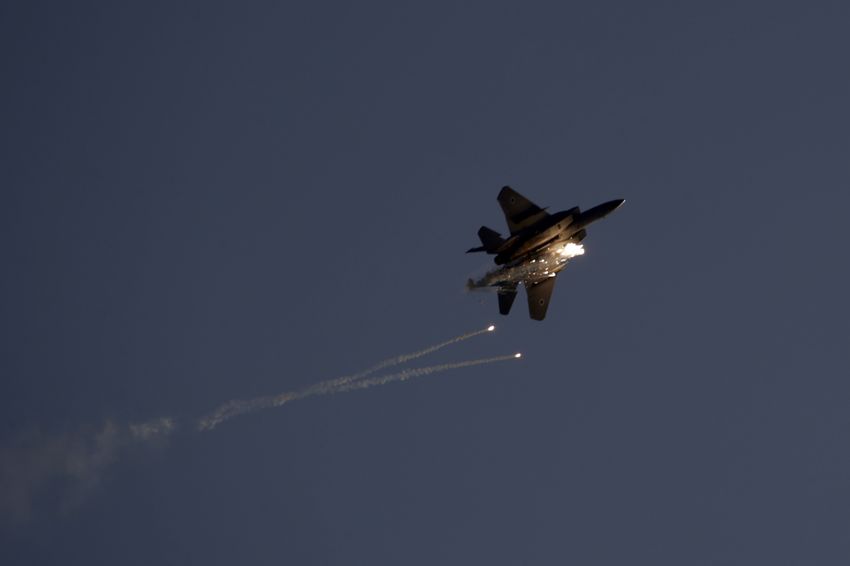 An Israeli Air Force plane F15 fly during graduation ceremony for new pilots in the Hatzerim air force base near the city of Beersheba, Israel, Wednesday, Dec. 26, 2018. (AP Photo/Ariel Schalit)

The Israeli Defense Forces (IDF) targeted the office of Major General Akram Hawija, commander of the Syrian Arab Army’s 7th Division, during the recent strikes on Syria, the Washington-based Alhurra TV reported on November 19, citing an Israeli source familiar with the situation.

A series of Israeli strikes targeted a number of Syrian and alleged Iranian bases in Syria’s central and southern regions early on November 18. According to Israel, the strikes were a response to an attempt by Unit 840 of Iran’s Quds Force to plant improvised explosive devices on the Israel-Syria separation line in the occupied Golan Heights.

The personal office of Maj. Gen. Hawija was destroyed in the strikes, which wiped out the entire headquarters of the 7th Division.

Hawija was one of five senior Syrian officers who were recently threatened by Israel. The IDF warned the Syrian officers from cooperating with Iran or Lebanon’s Hezbollah in leaflets dropped along the separation line last month.

The unnamed Israeli source told Alhurra that Iran is taking advantage of the poor conditions in southern Syria to recruit fighters.

“Israel is ready to provide them [civilians in southern Syria] with the necessary aid through international organizations such as the Red Cross or UN forces in the Golan,” the source said.

Israel is worried that Iran and its allies are building a “resistance” in southern Syria. Tell Aviv’s attempts to push Iranian forces out of the region through the use of force have been a failure, so far.

These attacks are not aimed to expel IRGC&Hezbollah from Syria…its just support to Syrian terrorist who have been defeated despite 7 years of Israeli attacks/airstrikes vs SAA under the pretext of Irani&Hezbollah deployment!..another similar case in the North front where Turks try to save his proxies, building post and bringing military equipment to support terrorist offensive!…

Of course, their aim is to slowly deplete what’s left of the SAA leadership and command structures.

gryzor84
Reply to  Fog of War

That’s exactly it. Beat their enemy down as long and hard as they can while it’s already on the ground. The Syrians will have to make due with those painful provocations but they seem to have understood they cannot afford opening a front with a superpower-supported enemy hell-bent on destroying what’s left of them at this critical juncture.

Vengeance is a cold plate indeed, and the SAA leadership has a full decade to come to terms with it. Stabilize, rebuild, refortify, and rise anew. This will take time and for now , time plays into Israeli hands at this particular level. It’s ok, history is filled with ups and downs anyway. Only shortsighted simpletons would see an end of trends and surprise for events to come in that single reality.

the alliance of syria and iran and hezbollah are building the force that will annihilate the jews in palestine- it takes time and by necessity it needs time but when they are ready the jews in palestine will be ground into the desert sand, soon to be forgotten. turkey are apt to join the alliance when it’s ready and no way will the jews in palestine survive such an onslaught. and the jews will also come to realize that the recent deals made with saudi, and uae and bahrain ain’t worth the paper it’s written on.

Turkey is under control, they are not going to fight Israel unless Erdogan gets toppled.

The secular Turks are even more pro-Zionist. Erdogan or not, they are all the same and subservient to the west. Turkey is a NATO vassal and people should never forget that.

turkey is fed up being in nato for no benefits and no membership in the eu nd is thus working hard to become the king pin in the middle east and the jews in palestine must, from that perspective be gotten rid of. and erdogan will be there for quite a few more years, at least until he can piss on netanyahu’s grave.

Hezbollah don’t seem to want to fight israeI, they didn’t respond to Israel blowing up half of beruit

In 1982, it was PLO versus Zionist conflict and Hezbollah was not the scene. They were created as a result of Zionist brutal occupation of South Lebanon, Shia heartland.

They are just trying to avoid a war, which would be devastating to the Shia population in the south. This even includes not acknowledging the low radiation micro-nuke that was dropped on Beirut port (as a message to Lebanon, probably).

Nuke? are drugs widely available in your neighborhood?

Only the designer drug of “media coverup” pal. Same one you’ve been sucking in . . .

Nitrate was the answer. 7 years of laying in heat of levant and then in one sunny day. BOOM.

Again, the explosion was probably aimed at arms shipment stored in the port. Unfortunately it spread out to the warehouse.

I have 100kg of nitrate that has been sitting in the heat of my garage for 3-4 years. No matter how much flame I apply to a small portion of it, there is no possibility of an explosion, unless I premix it with a fuel oil pal. Nice try . .

patient and bide your time – next stage is the complete annihilation of the jews in palestine and the time isn’t ripe for that end yet. but rest assured, Iran is gaining ground and will soon be in a good place for such an outcome, together with syria and hezbollah and turkey (erdogan hates netanyahu and thus the jews in palestine). and the jews in palestine, living off a land they have no right whatsoever to, can do their useless attacks but the preparations continue at pace and if we are lucky, the jews will be finished and buried before too long.

Israel is simply looking for provocation, big, small minute you name it. All these pretexts will do. After all 60 days left to get things done!

Sow the wind, reap the whirlwind, something the Zionist entity doesn’t understand.

Frankly, this is just Zionist desperation and to stay relevant. How does killing a few Syrian children or conscripts change the military equation of Iranian strategic plans for the region? nada!

Is there any point to these cosmetic and ineffective Zionist stand off missile strikes on Syria? Iran is not about to leave Syria.

Israel can drop a GBU-43/B or 57B with their hearts content in Syria. It won’t dislodge Iranians.

The Zionist regime is scared as Trump is gone and their future is uncertain. This is just attention seeking to stay relevant. Even hasbara has been told to keep a low profile.

Nah, screw Trump, he just wasn’t good enough… Biden and Kamala (and her husband) will be much better, according to the Jerusalem Post: https://www.jpost.com/opinion/i-had-no-idea-biden-has-a-jewish-family-thats-actually-good-opinion-649555

By not striking back, Syria is practically telling the world that they have become comfortable being Israel’s punching bag.

Well Russia is the protector of Zionism. Russia is allowing these strikes.

its not much that russia can do russia cannot fight everyone .

they are just waiting for the alliance to get ready so that they can finish off the jews in palestine. rest assured, the days of reckoning for the ever evildoers, the jews in palestine, is coming up and coming up fast. 6 million cowardly jews against some 200 million true middle eastern people. and if you think for one second that the jews can attack Iran, think again. too large a spread and too far away. and using nukes would mean an open year for the hunt on jews anywhere.

Israel is trying to assassinate an officer in his own country and Pompeo, with a big fat grin on his face is drooling over the day he gets to declare the Houthis terrorists to implement his starvation campaign against Yemen. There is no justice in this world.

“According to Israel, the strikes were a response to an attempt by”- Santa Claus – “to plant improvised explosive devices” in Bibi’s chimney. here, now is even more believable.