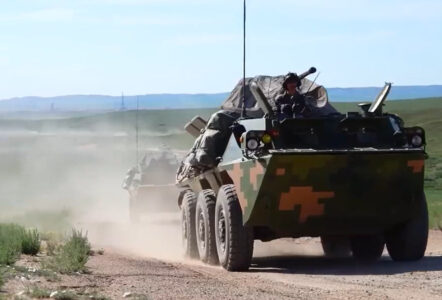 In July, the Chinese PLA ground forces trained the rapid deployment of troops to operational areas. The 145 mixed mechanized brigade of the 73rd Army of ground forces of the Eastern Command of the PLA conducted an exercise to check the readiness of the compound to make a long-distance march.

The troops successfully passed 1000 km in three days and trained various commands as loading of personnel and military equipment, delivery to the unloading station, marching to a conditional area of combat operations at night, carried out shooting and offensive actions etc.

In case of a military conflict, at the initial stage of a potential operation against Taiwan, the PLA would undertake a covert deployment of sabotage and reconnaissance groups to eliminate or capture the leadership of the island. Then, military equipment and personnel would be transferred to the area of hostilities. China has recently carried out a number of military exercises aimed at increasing of the combat readiness of its navy. Definitely, marine infantry units and trained formations of the land forces of the Eastern and Southern commands from the 72nd, 73rd, 74th PLA Armies will be deployed on the island.

Majority of East-Asian nations such as Mongolia, China, Korea, Vietnam, Laos, and Myanmar don’t even allow racial mixing with foreign races there. It is only Whites who are called “racist” if they are not allowing this in their own country like they used to. In the Communist People’s Republic of China, Xi Jinping (Chinese Nationalist himself) doesn’t allow non-Chinese to integrate into Chinese society, nor allow any Non-Chinese to be Chinese citizens, but he tells millions of his fellow Chinese in China to come into White western nations, to over populate there, and out breed the Whites.

Go back to Ukraine and await your turn on the Kinzhal.

Wtf china to outbreed whites where? That’s the turkish strategy not the chinese….

All the Chinese I know in America have small families. Typically one or two children. Many Chinese women marry white men, with similar low birth rates. So the claim that the Chinese are going to ourbreed whites in white countries is not true. But Moslems, niggers and spics do breed like rabbits. They’re the problem.

Immigrants are the reason why the west population hasn’t went into a serious decline. Fat Americans aren’t fertile from all the fast food they eat

Immigration and parasitic jewish subversion is the reason the western population is going into serious decline and threatened with genocide via ethnic replacement. Without feminism and contraception promoted by Cultural Marxism, we wouldn’t have low birthrates.

the chinese work hard and contribute to the economy. just cause your too lazy and stupid you look for someone else to blame. LOSER!

You make such a claim to deflect away from the fact there are plenty more people who match hillbilly stereotypes within the countries you are rooting for.

Russia embarrassed for Ukraine because Ukraine has been given their city to Russia one by one .Taiwan will do it too.

I’ve watched some of these videos of the Chinese military and they are impressive. China has become a very patriotic, unified, structured and disciplined nation this was verified by my visit to China in 2010. They are prepared for all out war if necessary. If they do decide to make an incursion into Taiwan which is their land, Taiwan will not be able to put up much of a resistance at all. The best thing that can happen is that Taiwain votes in new leadership that wants to build friendly ties with China. Now is the time for Taiwan to change its course if the government truly cares about its people since the U.S. is so weak and fractured and the whole world sees it.

You should doublecheck what you think to be factual.

I’ve been to China and they are having an industrial revolution the likes of which no other nation has ever had. I don’t know what country you’re from but as an American the infrastructure, economy and much of my society is in shambles, drug addiction, crime, political corruption is rampant. We are falling apart as is western Europe. China on the other hand is soon to be the biggest economy in the world and just to give you one example 2/3 of all the female billionaire business entrepreneurs of the world are in China. I can cut and paste 100 url videos of people in cities in America shooting up drugs in public, homelessness, executions in the middle of the day, bridges collapsing, trains derailing etc. That is not even the main problem in America and Europe. The main problem in America is the fractured and divided state of the country. Almost the exact opposite of what is happening in Russia and China. Both Russia and China are very united, patriotic, nationalistic and proud nations. Without national unity, without the people of a nation being united by common causes, any nation or empire will implode and collapse.

China is not ruled by Jewish masters yet like the west is. Jews spread and promote cultural degeneracy in the west to weaken and wreck white nations.

“I don’t know what country you’re from but as an American the infrastructure, economy and much of my society is in shambles, drug addiction, crime, political corruption is rampant. We are falling apart as is western Europe.”

Their infrastructure is more stable than in China, I guarantee that much. The economy, drug addition, crime, political corruption, degeneracy and disunity etc would not be there if we were not living in a multiracial society. You either ignore or are unaware of similar problems elsewhere, not to mention China and Russia are also tied into the the UN’s and WEF’s Great Reset for “sustainable development” where we will “own nothing and be happy”, consume insects (Chinese already do that) and live in plastic pods in compact housing.

My point is ultimately the enormous hypocrisy when it comes to the topic of Whites not being allowed to have ethnonationalism when the rest of the world is encouraged to have racial pride and their own ethnostates.

You can’t prove me wrong, when did I ever say the USA is not shit? Russia and China are shit too.

Learn to spell properly. Whereas I’m a serious person, you are rather infantile and certainly a troll, an adolescent that doesn’t know any better.

Narrated by Gene Wilder, EXPO – Magic of the White City brings the Chicago World’s Fair to life. Experience the world of 1893 through a cinematic visit to Chicago’s Columbian Exposition.

POKO MOLO – NO ONE asked for your dumb takes. NO ONE!!! You behave like a spam bot cuz thats what you are. GTFO!

Can’t wait for that show to start!

I am pretty sure noone will be as stupid as the ukrainians. The moment the Taiwan government knows that china is about to attack and the US show no sign that they will go into the fight themselves, they will surrender.

Guess China thinks if ASML does not want to deliver the chip production equipment, they will take if from the place they allready delivered to.

The gov’t in Blighty, if it can be called a gov’t, are keeping their heads down on this subject of Taiwan because of Northern Ireland and the Falklands. Even their hypocrisy has bounds.

Remember Taiwan is a small island at 100 Km from the Mainland China and completely isolated from the rest of the world. It could not receive arms, money or mercenaries in the middle of a conflict and end up as a proxy battlefield. China can surround Taiwan quickly and close all channels in a matter of days.

No problems if Taiwan leader isn’t high on metamphetamine until declare independent like Zelenski has been asking to joint NATO .They will do business as usual.

While the Jewish vassal states worry about pronouns and a multi racial military China is busy preparing real men to fight.

Multi racial= Many spies. US army seriously thinks that the people who were forced to immigrate to the USA because of USA actions will stay loyal

Considering the lukewarm Chinese position on the Ukraine I certainly hope the Russian Federation can manage to mirror the outlook on military matters regarding China and Taiwan. No reason for Russia to get involved in that mess and certainly no reason to engage in nonsense like joint sea and air patrols with the Chinese.

Russia takes their Word given to a country very seriously . If China needs help Russia will respond quickly. They are becoming more than simple trade partners.

after midbrain and senile jens marry they have dim sum—dim bulb nazis employ Chinese caterer—pay in roubles, now prepared to be Chinese colony