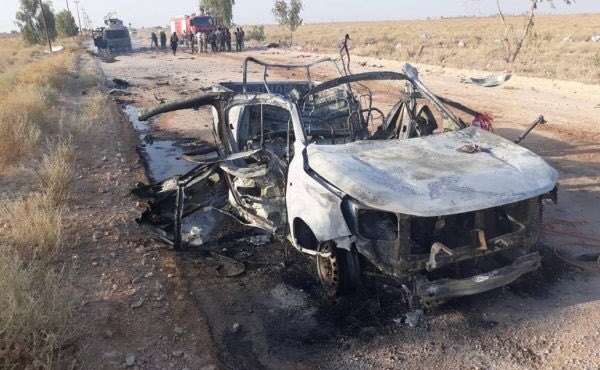 Israel launched the last five attacks on the Iraqi Popular Mobilization Units (PMU) from bases in the US-occupied areas in northwestern Syria, an Iraqi intelligence source told the Middle East Eye on August 27.

The intelligence source added that Israeli drones were used in the attacks, claiming that Saudi Arabia is financing such operations.

“The drone attacks were launched from SDF [US-backed Syrian Democratic Forces] areas with the financing and backing of the Saudis,” the official, speaking on condition of anonymity, told the Middle East Eye.

Saudi Minister of State for Gulf Affairs Thamer al-Sabhan offered the SDF funds in return for their bases being used as a launchpad for the strikes, according to the source. Al-Sabhan visitied the SDF-held areas last June.

In the most recent attack, a commander of the PMU was assassinated in a drone strike near the al-Qa’im crossing on the border with Syria.

The PMU held Israel and U.S. forces in Iraq responsible for any future attack on its bases or personnel and vowed to respond. However, the Iraqi force is yet to take any action.

Well well. So no F35, but drones. Israeli propaganda said otherwise. ;) And as this scenario has been reported by several other sources, it now seems pretty likely, that the attacks were indeed made out of SDF occupied Syria with drones.

You can call me Al
Reply to  EveryoneIsBiased

cristi cristikosk
Reply to  You can call me Al

That looks like a classic Lombroso theory . Instead of meeting eyebrows there appears to be another commonality.

You can call me Al
Reply to  cristi cristikosk

What are these birds. F35 homing pidgins of course.

So far the Americunts and their Zionist masters have paid ZERO price for their aggression and growing footprint in the region. The Zionist dream of controlling from Nile to Euphrates is now a reality as they have huge bases in Arbil and Al-Hasakah.

I wonder why they left out the most important achievement in their list, world dominated political transgenderism.

You kids are funny. I posted this months ago that the Zionists are operating in Eastern Euphrates with impunity. The CIA and the Zionists have a large combined base at al-Hasakah in eastern Euphrates and they are both using it to attack the Iranians, PMU and Hezbollah units with impunity and much worse is yet to come as the Zionist footprint in Iraq and Syria becomes bigger. Unless Arbil is hit and the treacherous Kurds pay a price they will invite more Zionists. There are already hundreds of Mossad agents in Arbil and eastern Syria.

Again if Iraq and Syria want to eliminate terrorism and war from their soil, all U.S. personnel need to kicked out of said country.

and how is that going to happen, if the Arab pussies and Iranian morons refuse to fight? Syria and Iraq are now completely occupied by Americunts and their Zionist masters. The IDF is now openly operating from Kurd turd areas of eastern Euphrates and the Harpy drones that blew up the PMU ammo dumps and caused hundreds of casualties came from CIA base at al-Hasakah which it now shares with hundreds of Zionists . Never in the 70 year old history of Zionist occupation of Palestine have they moved all the way to the Euphrates and they will never leave now unless there are casualties and resistance.

Kurds on average only account for about 35% of the population in SDF held territory, and 35% of the population are Arab, and they’re just about revolting as it is, so it’s not really Assad’s forces the US has to be mindful of, it’s the enemy from within. Give things a little time, add heaps of discontent and resentment, concerns over US appeasement of Turkey, and some helpful SAA sh-t stirring, and they could have a civil uprising in no time. So why fight the type of war you could never ever win, it’s far better to fight the type of war you at least have a chance of winning, so don’t presume Assad’s not fighting a war in the north right now, because maybe he is, just not with soldiers and weapons. As to getting the Zionists out, I agree, while the US still has any sort of presence in northern Syria the Zionists will be there with them, and as to any solution for removing them, I think it’ll involve a removal of US troops before that could happen. But be aware, even if the US do pull out for whatever reason, the Zionists may still keep some sort of presence in the area afterwards, and the only known remedy for that type of contagious infection is, to self medicate on small doses of deadly poison [getting rid of the spies and traitors], but nobody likes taking bad medicine, so I hope Assad’s got heaps of sugar handy, if and when it does happen.

Kurds are 8 % of Syria’s total population, just to keep the view objective and real.

Yes, I was not trying to suggest you were not speaking the truth, but was trying “just to keep the view objective and real”. Americas excuse for being in Syria is to protect the Kurds. Occupying 30 % of the land to “protect” 8 % o0f the population is stretching this protection a bit much.

I agree, “Occupying 30 % of the land to “protect” 8 % of the population is stretching this protection a bit much”. But I also think this will change as soon as Turkey’s forced out of Syria, which will be soon.

As if it takes a genius to figure this out as the Americunts are total puppets of Zionist scum and now control over 30% of Syria and with the Kurd turds will cause major mayhem as the Arabs and Iranians are cowards and don’t hit back. Next attack will kill both the bunker hiding Nasrallah and the moron Soleimani who has sent illiterate cannon fodder to die in Syria, Iraq and Lebanon. Unless the Arabs and Iranians grow a pair, the Zionist attacks will get worse.

Israeli forces openly claimed attacks and bragged about killing Iranians and Hezbollah over the weekend in Syria and the Palestinian-administered Gaza Strip and were blamed for two more operations in Lebanon and Iraq. As reports of what occurred across the region emerged, Israeli Prime Minister Benjamin Netanyahu hinted at his country’s ongoing efforts abroad, telling a Monday planning meeting that “we will deepen our roots and strike at our enemies.”

The fact you are unable to use civil language says more about you and your empty rhetoric then any possible other comment.

“The PMU Israel and U.S. forces in Iraq responsible” — you’ll “hold them responsible” when you kill a few of them like they killed a few of you; it’s the only language they understand. If you fail to act, cowering in fear, you de facto participate in Bibi’s election campaign, like Putin did last time round; is that what you really want?

Iran displayed a keen awareness of this dynamic with how they handled the tanker debacle. But that was against the British poodle — a good deal less scary these days than the US/IL principals. Also, Iran proper may be in better shape to respond than the various pro-Iranian proxies.

All in all, a hard reality check for the tough-talking “resistance”. Not only can their enemies strike them at will, but apparently they are largely dependent on those same enemies for information on what hit them.

I just knew the F35 story was a fabrication.

An article based upon say so by an Iraqi intelligence officer. Did not even know they had one. Seems to me this is just trolling and gossip spreading and not a serious article. You can imagine my opinion of serious comments on this BS.

Yes the US deny it vehemently, and because those drones could have come all the way from Israel itself [that’s if Turkey gave them permission to use Turkish airspace], it’s quite possible the US wasn’t involved at all. And besides that, the Israelis actually deny carrying out all these drone strikes themselves, and only admit to most of them, so perhaps Turkey, which has its own dislike for the PMU militia, carried out a few of those drone strikes themselves.

Turkey even has Israeli drones. False flag operations are easy then. Even with fotos.It is known that Turkey has a jihadi team in Jarablus making fake SDF movies, committing atrocities with fake SDF imposters.

Nothing surprises me at all anymore when it concerns Erdogan’s activities, if he was willing to get into bed with Isis he’s capable of anything.