On Tuesday, the US-backed Syrian Democratic Forces (SDF) released an official statement denying that it had reached a ceasefire deal with ISIS in eastern Syria. The US-backed group said that the reports about the ceasefire deal is a part of the propaganda campaign against the SDF launched by its enemies. (MORE DETAILS ABOUT THE ALLEGED CEASEFIRE)

Even if very this document is fake, the SDF is the main side responsible for the fact that the people are ready to believe in such reports. The US-led coalition and the SDF have repeatedly insisted that they make no deals with ISIS. Meanwhile, they made deals with ISIS in the cities of Manbij, Tabqah and Raqqah and allegedly made a deal with ISIS-linked tribes in the area of the Omar oil fields. “Our intention is that the foreign fighters do not survive the fight to return home to north Africa, to Europe, to America, to Asia, to Africa. We are not going to allow them to do so… (emphasis added, quoted in the BBC report entitled Raqqa’s Dirty Secret)

That was the “political narrative” of the Pentagon. The unspoken truth is that Uncle Sam had come to the rescue of the Islamic State. That decision was in all likelihood taken and carried on the orders of the Pentagon rather than the US State Department. 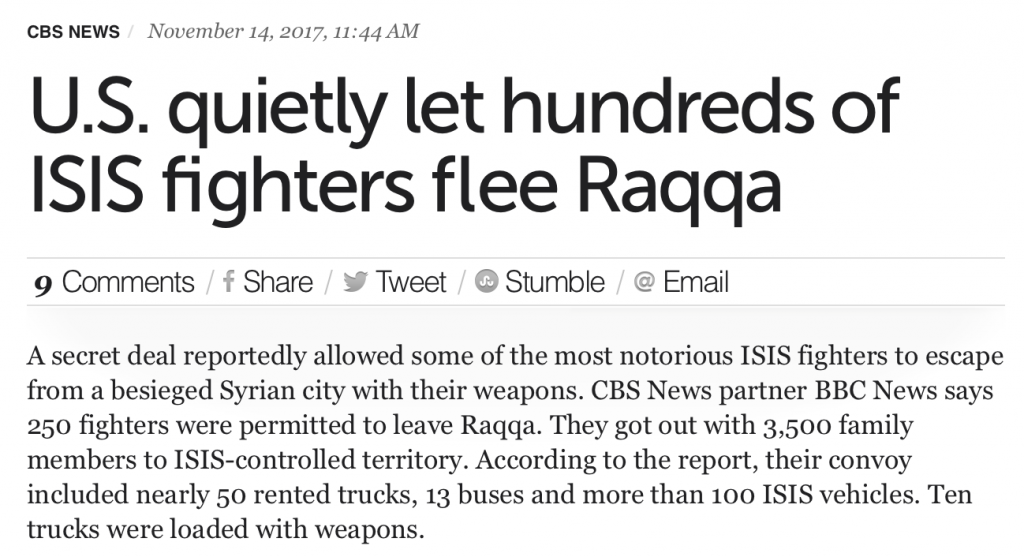 Confirmed by a BBC report entitled “Raqqa’s Dirty Secret, the US-led coalition facilitated the exodus of ISIS terrorists and their family members  out of their stronghold in Raqqa, Northern Syria. 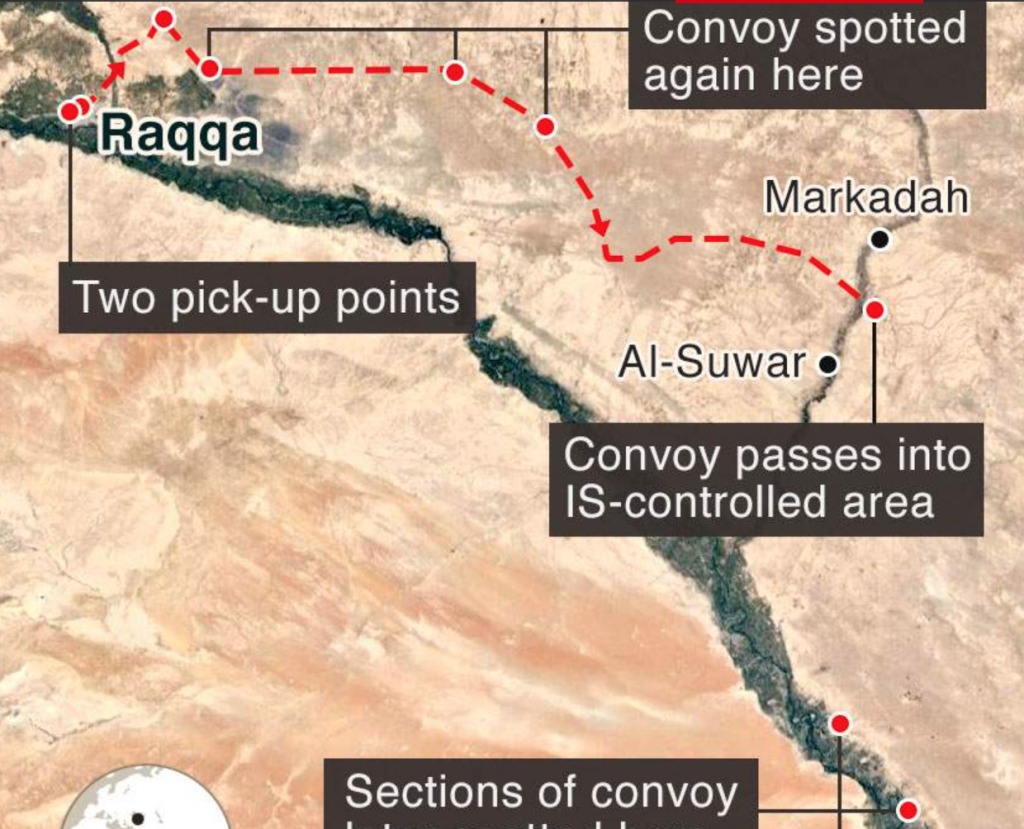 While the BBC report focussed on the details of the smuggling operation, it nonetheless acknowledges the existence of a “Secret Deal” involving the US and its indefectible British ally to let the terrorists escape from Raqqa.

“The deal to let IS fighters escape from Raqqa – de facto capital of their self-declared caliphate – had been arranged by local officials. It came after four months of fighting that left the city obliterated and almost devoid of people. It would spare lives and bring fighting to an end. The lives of the Arab, Kurdish and other fighters opposing IS would be spared.

But it also enabled many hundreds of IS fighters to escape from the city. At the time, neither the US and British-led coalition, nor the SDF, which it backs, wanted to admit their part.

Has the pact, which stood as Raqqa’s dirty secret, unleashed a threat to the outside world – one that has enabled militants to spread far and wide across Syria and beyond?

Great pains were taken to hide it from the world. But the BBC has spoken to dozens of people who were either on the convoy, or observed it, and to the men who negotiated the deal. …

This wasn’t so much an evacuation – it was the exodus of [the] so-called Islamic State.

US-led coalition warplanes had been monitoring the evacuation of the ISIS terrorists, but visibly the convoys of buses and trucks were not the object of coalition bombings.

“The coalition now confirms that while it did not have its personnel on the ground, it monitored the convoy from the air. [but no actual aerial bombardment of the convoys took place] …

In light of the BBC investigation, the coalition now admits the part it played in the deal….” (Ibid)

If they had wanted to undermine the ISIS convoy of buses and trucks, this would have been a simple operation for the US Air Force. On the other hand, they could have chosen to block rather than destroy the convoys of trucks and buses (to minimize the loss of life) and detain and incarcerate the foreign fighters.

US officials casually claimed they did not take part in the negotiations and were therefore unable to prevent the exodus of the terrorists:

“We didn’t want anyone to leave,” says Col Ryan Dillon, spokesman for Operation Inherent Resolve, the Western coalition against IS.

“It comes down to Syrians – they are the ones fighting and dying, they get to make the decisions regarding operations,” he says.

While a Western officer was present for the negotiations, they didn’t take an “active part” in the discussions. Col Dillon maintains, … (Ibid)

What is revealing is that most of the ISIS fighters were foreign from a large number of countries pointing to a carefully organized recruitment and training program:

“Most were foreign but there were Syrians as well.” …

“Some were talking in French, others in English, others in some foreign language,” he says. (Ibid) 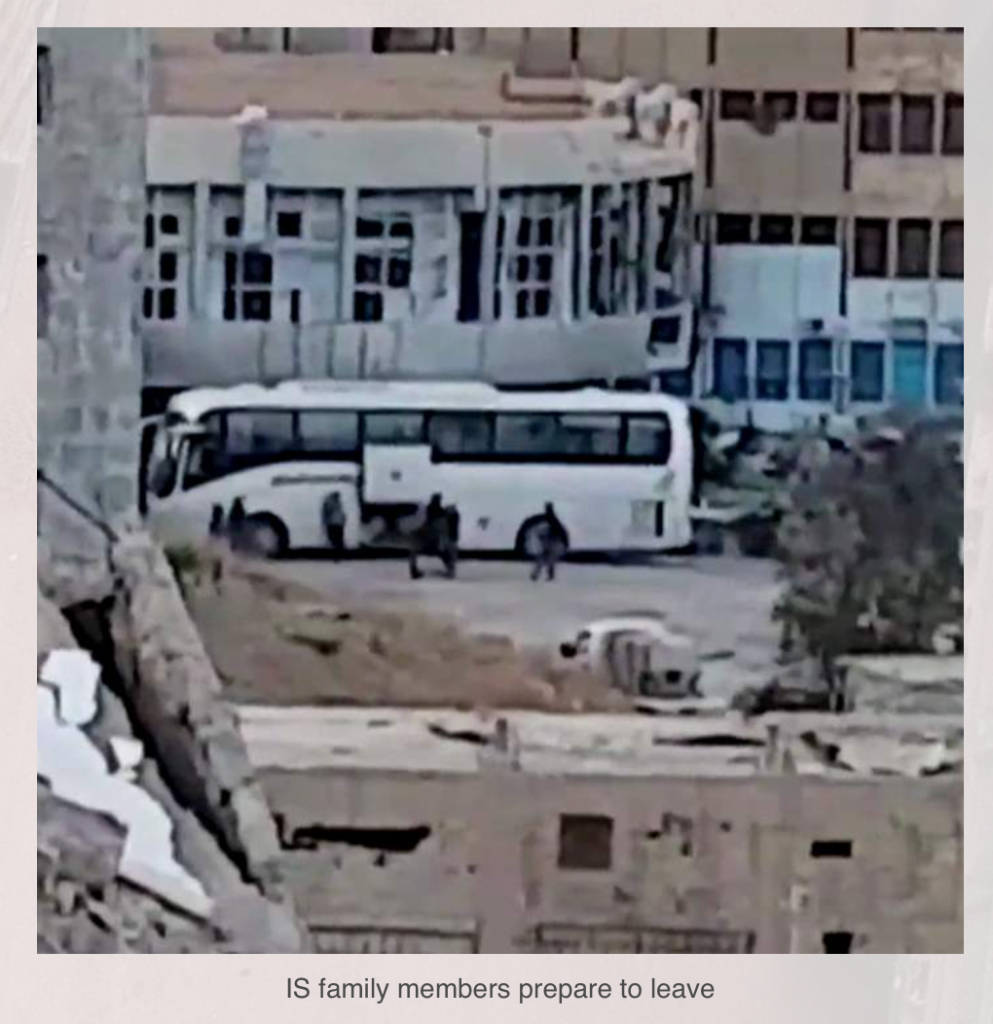 The BBC report suggests a carefully formulated plan to ensure the safe evacuation of the terrorists. The official explanation was that the deal has been brokered by the US supported Syrian Democratic Forces (SDF). The US-led coalition “let it happen”, they did not intervene militarily to prevent the exodus and smuggling of the foreign fighters out of Raqqa.

This should come as no surprise. From the very outset in 2014, ISIS-Daesh was supported by the US-led coalition, with the active support of Saudi Arabia. The US and its allies are the State sponsors of the Islamic State (ISIS-Daesh).

Weapons, training, logistics: the ISIS is a US intelligence construct. The ISIS-Daesh terrorists are the foot-soldiers of US-NATO.

The US-led bombings of Iraq and Syria–under the guise of a phony “war on terrorism”– were not directed at ISIS-Daesh. The terrorists were protected by the US led Coalition. The unspoken objective was to kill civilians and destroy the civilian infrastructure of both Syria and Iraq.

Is there a pattern in the evacuation of U.S. sponsored terrorists?

Flashback to another US led war. Afghanistan 2001. The objective for the U.S. is ultimately to protect their “intelligence assets”.

The October 2017 ‘Raqqa exodus” bears a canny resemblance to the November 2001 “Getaway” out of Kunduz, ordered by Donald Rumsfeld. In both cases the objective was for the Pentagon and the CIA to organize the escape (and relocation) of US sponsored foreign jihahist fighters.

In late November 2001, according to Seymour M. Hersh, the Northern Alliance supported by US bombing raids took control of the hill town of Kunduz in Northern Afghanistan:

‘[Eight thousand or more men] had been trapped inside the city in the last days of the siege, roughly half of whom were Pakistanis.  Afghans, Uzbeks, Chechens, and various Arab mercenaries accounted for the rest.” (Seymour M. Hersh, The Getaway, The New Yorker, 28 January 2002.

President Bush had intimated: “We’re smoking them out. They’re running, and now we’re going to bring them to justice.” (see CNN, November 26, 2001). They were never smoked out. They were airlifted to safety.

On the orders of Defense Secretary Donald Rumsfeld, the exodus (airlifting) of Al Qaeda fighters had been facilitated by US forces in liaison with the Pakistan military:

… According to a former high-level American defense official, the airlift was approved because of representations by the Pakistanis that “there were guys- intelligence agents and underground guys-who needed to get out.” (Seymour Hersh, op cit)

In other words, the official story was: it was not our decision:  “we were tricked into it” by the Pakistani ISI.

Out of some 8000 or more men, 3300 surrendered to the Northern Alliance, leaving between 4000 and 5000 men “unaccounted for”. According to Hersh’s investigation, based on Indian intelligence sources, at least 4000 men including two Pakistani Army generals were evacuated. (Ibid)

The same sense of denial prevailed. US officials admitted, however, that

“what was supposed to be a limited evacuation apparently slipped out of control, and, as an unintended consequence, an unknown number of Taliban and Al Qaeda fighters managed to join in the exodus.”  (quoted in Hersh op cit)

Compare Seymour Hersh’s account in the “Getaway” out of Kunduz pertaining to the US sponsored evacuation of  hard core Al Qaeda and Taliban fighters to the “Escape” of ISIS-Daesh fighters out of the besieged city of Raqqa in Northern Syria.

The foreign and Pakistani Al Qaeda fighters were flown to North Pakistan, to the areas which were subsequently the object of US drone attacks. Many of these fighters were also incorporated into the two main Kashmiri terrorist rebel groups, Lashkar-e-Taiba (“Army of the Pure”) and Jaish-e-Muhammad (“Army of Mohammed”).

What is the next destination of the foreign fighters who have been evacuated out of Raqqa, with the support of the US Military?

ISIS, SDF, Hyat, Nusra and others are all the sons of US. The whole world can be blind forever

You can call me Al
Reply to  Hassadnah Abraham

“cannot” ? in the second sentence.

It doesn’t matter. Actually, it does matter a lot, but in the West people no longer care about foreign policy. The days that foreign policy triggered massive protests are over. And its not that there is no alternative news about such things, cause in many ways there’s even more access to alternative news now then then. It’s just that activists no longer cares. They only care about women’s rights, gay rights, animal rights and letting migrants in. Whatever the military and government do in brown countries, not their problem. There’s civil war statues to topple!

Who or what is going to throw a monkey wrench in Western foreign policy, it’s not going to come from within the West.

What’s interesting is that the same western centre-left MSM that once expressed concerns over aspects of western foreign policy actions in prior decades, think skepticism about 1991 Gulf War, is now fixated on domestic related western identity politics and gives a complicit free pass to the western state’s perpetual and opportune aggressive war policies. The post 2001 anti-terrorism rhetoric and legislation has been the key development in all this – combating ‘terrorism’ can now be endlessly exploited as the public rationale for deployment of US/NATO military personal into any number of non US compliant state environments – seemingly without any end in sight.

People never care about foreign policy when they are too busy with day to day struggle.if you want to see vietnam era protests then usa has to raise its standard of living for most people.

Of course, this is known by think tanks and it is part of reason why they dont encourage realprice increases in salaries and love the rise of mega corporations.

The former exceptional nation is transporting its battered mercs from unsafe place A to unsafe place B. Yawn.

Replace “US-led” with “Zionist” and you have the pre-censored version.