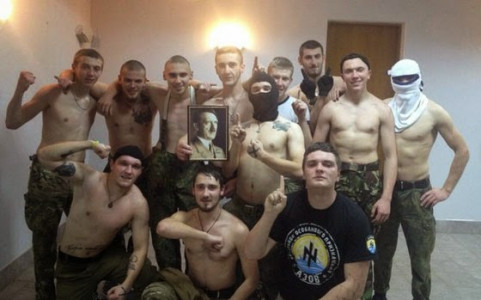 Ukraine’s entry into NATO is again facing a severe barrier due to Kiev’s insistence on implementing racist and anti-humanitarian policies. Recently, the Hungarian government has severely criticized the way Ukraine has been dealing with the issue of ethnic minorities and stated that the country cannot be admitted to the Western military alliance because of such problems. The criticisms follow an old argument, already commented before by officials and experts from different countries. Indeed, Kiev’s political alignment with the West does not seem to reflect a profound move towards creating a “Ukrainian democracy”, which could be a serious problem for Europeans.

In a recent statement, Hungarian Foreign Minister Peter Siyjarto criticized Kiev’s policy towards the ethnic minorities that inhabit the Ukrainian territory, claiming that their rights are being violated, especially regarding the ban on the use of their native languages. These were his words: “Regarding the situation in Ukraine, our position here is unequivocal: we have always supported the sovereignty of Ukraine, it has never been questioned. But we also support the following position: we believe that the interests of ethnic minorities should not be [violated]. We also see that Ukraine violates many agreements (…) “However, we see that in the Transcarpathian region there are more and more conflicts and incidents, and the right to education in the mother tongue is being violated. We have asked the Ukrainian side to end this policy, but so far the necessary measures have not been taken”.

In the western world, the Ukrainian social reality is little known, which is why many people believe that the ethnic minorities existing there are restricted to Russian-speaking groups, which is not true. Many ethnic minority groups reside in the Ukrainian space, including even groups of Hungarian origin (mainly in the Transcarpathia region). All minority groups in the country have suffered heavy sanctions in recent years, when the ultra-nationalist government has come to exalt the Ukrainian identity as the only “legitimate” in the country, with the aim of polarizing society and creating tensions with Russia. As a side effect of this anti-Russian ethnic crusade, other identities are also being undermined and this is creating tensions even with countries that support Ukrainian sovereignty, such as Hungary.

In this sense, since 2017, bilateral relations between Ukraine and Hungary have gradually deteriorated. That year, the Ukrainian parliament passed a law that prohibits any language other than Ukrainian from composing the educational process in the country’s schools, which has generated much controversy among members of the Hungarian community. Subsequently, the Ukrainian Constitutional Court considered illegitimate and banned a 2012 law that would give the Hungarian language co-official language status in the regions where it is spoken. The move has affected the lives of hundreds of thousands of Hungarian-speaking Ukrainian citizens, leading to repudiation by both the local Hungarian community and the government in Budapest.

To make matters worse, the case became a real political issue when, shortly after these events, Kiev began accusing Budapest of supporting the Party of Hungarians of Ukraine, a nationalist organization from Transcarpathia. Several operations were carried out in order to fight the party and to find evidence of the supposed sources of funding and support from Budapest, being all of them unsuccessful. There was great international scandal over this issue, with Hungary severely criticizing the Ukrainian attitude and classifying it the act as a real persecution against the ethnic minorities that inhabit the region.

In fact, the arguments used by the Hungarian side are right. For years, Ukraine has been going through a process of radicalizing its ethnic-related policies, harming all the minority groups that inhabit the country, which is unacceptable in the contemporary international scenario, where concerns about the implementation of humanitarian standards are growing. NATO is an organization of extreme relevance in this point, because, while the alliance rivals Russia, it is also concerned with the fulfillment of the most basic humanitarian norms, as it has among its members the nations considered “bastions of democracy”. In this scenario, Ukraine will have to decide between striving to improve its democracy – which includes adopting lenient and permissive policies towards ethnic minorities – or adopting a totally isolated posture, with few international allies.

At no time will Ukraine cease to be used by NATO. The country will continue to serve as a key point in an encirclement strategy to encourage rising tensions with Russia, as well as having its soil used as a base for military operations, tests, and maneuvers. But there will definitely be no room for Kiev on the alliance’s membership list as long as the Ukrainian government can damage the organization’s image as “global police of democracy”.

I’m not Hitler fan, myself, but I don’t hold it against them. All the minorities are free to leave at their leisure. I think Hungary need to stop clutching pearls and get with the program because the next thing their NATO patrons are going to want is open borders.

The first NATO Secretary General, Lord Ismay, stated that NATO’s goal was “to keep the Russians out, the Americans in, and the Germans down”.

South Front can at least provide some examples from Ukrainian legislation:

“radicalizing its ethnic-related policies, harming all the minority groups that inhabit the country, which is unacceptable in the contemporary international scenario, where concerns about the implementation of humanitarian standards are growing.”

All I see are idiotic larpers pretending to be something they aren’t.

Things were different 40 years ago also compared to, that Russia actually collapsed in 1991 and had many bad leftovers like what we see.

Oh hey, true dat. Somebody does a Roman salute an now everybody and his grandmother is a “nat-zee”. Typical leftist hysterics, nothing to see here. I guess I just expected the Hungarians to be more level-headed than this.

Sounds like he’s describing the world in its current state: https://archive.org/details/AdolfHitlerTheManWhoFoughtBankingControlAndTheFraudulentDemocraticPoliticalSystem

The Differences Between A National-Socialist and A Neo-Nazi: https://worldtruthvideos.website/search?keyword=neo-nazi+vs+real+national+socialist

Imagine being executed at Nuremberg for publishing an anti-jewish newspaper called ‘Der Sturmer’, that man was Julius Streicher. https://www.thomasdaltonphd.com/pan-judah

The first image on the left: Living Torches in Prague, Wenceslas Square. This was when Pole, Czech and Slovak civilians started killing ethnic Germans in 1945 (as they had from 1918-1920s) as apart of the Soviet policy to ethnically cleanse Germans out of East Prussia, the Baltics, Poland and former Czechoslovakia.

The Horrific Tragedy of Ethnic Sudeten Germans in Czechoslovakia: http://www.renegadetribune.com/the-horrific-tragedy-of-ethnic-sudeten-germans-in-czechoslovakia/?doing_wp_cron=1632779534.0340790748596191406250

I agree. Hungarians as others has to clean their own house a number one.

Hungary is rapidly becoming my favourite European country. Conservative with common sense, non-russophobic and intelligent leadership that works for the citizens not the NWO scum.

Well said, you are certainly not alone in your astute observations.

zelenskiy is a zionist pig as was porky. The fool kolomoisky is another bloated oligarch, zionist stooge. Why are Slavic people fighting against fellow Slav’s for zionist pigcrap?

By pigs you mean danish/english no?

They cannot join NATO, owing to never ratifying their borders with Russia and Belarus, in accordance with international law. The borders are only recognised, whilst Russia, Belarus and Ukraine are members of the CIS. Ukraine tried in 1997 to join NATO and failed, owing to the borders never being ratified since the fall of the Soviet Union. They still have not been ratified.

jens holm
Reply to  AM Hants

We dont want them at all.

Every time things comes from Costa del Dark Rio del Janeiro I stop when something is terrible wrong.

Today I stopped at “In the western world, the Ukrainian social reality is little known”.

The ones which cares at all know things well and are supported by the many millions which has left to us and has made USA and many other Countries here great adding many many inhabitants.

And its the same today. People from there still leave several countries from there for exact same reasons. And where do they go ?

I would think a Russian move to retake their land would be more of a deterrent.

I think there is some agreement between Russia and Turkey about it.

They also has promised that Assads should no be resigned. In the other hand they dont accept bombardments of their base facilities.

Its a kind of expect from here, that turks will put in more artillery if that happens… Something like that.

Oh cool that is a good news isn’t

The Lost boys with no future…

Braindead ukroptrash wont join anything. Everyone hates their autistic nazi guts. They are nothing but pawns thrown into the meat grinder. It would be actually a good thing if NATO would greenlight it, because 2weeks after that the Russian flag would fly high above Kiev on top of the Rada