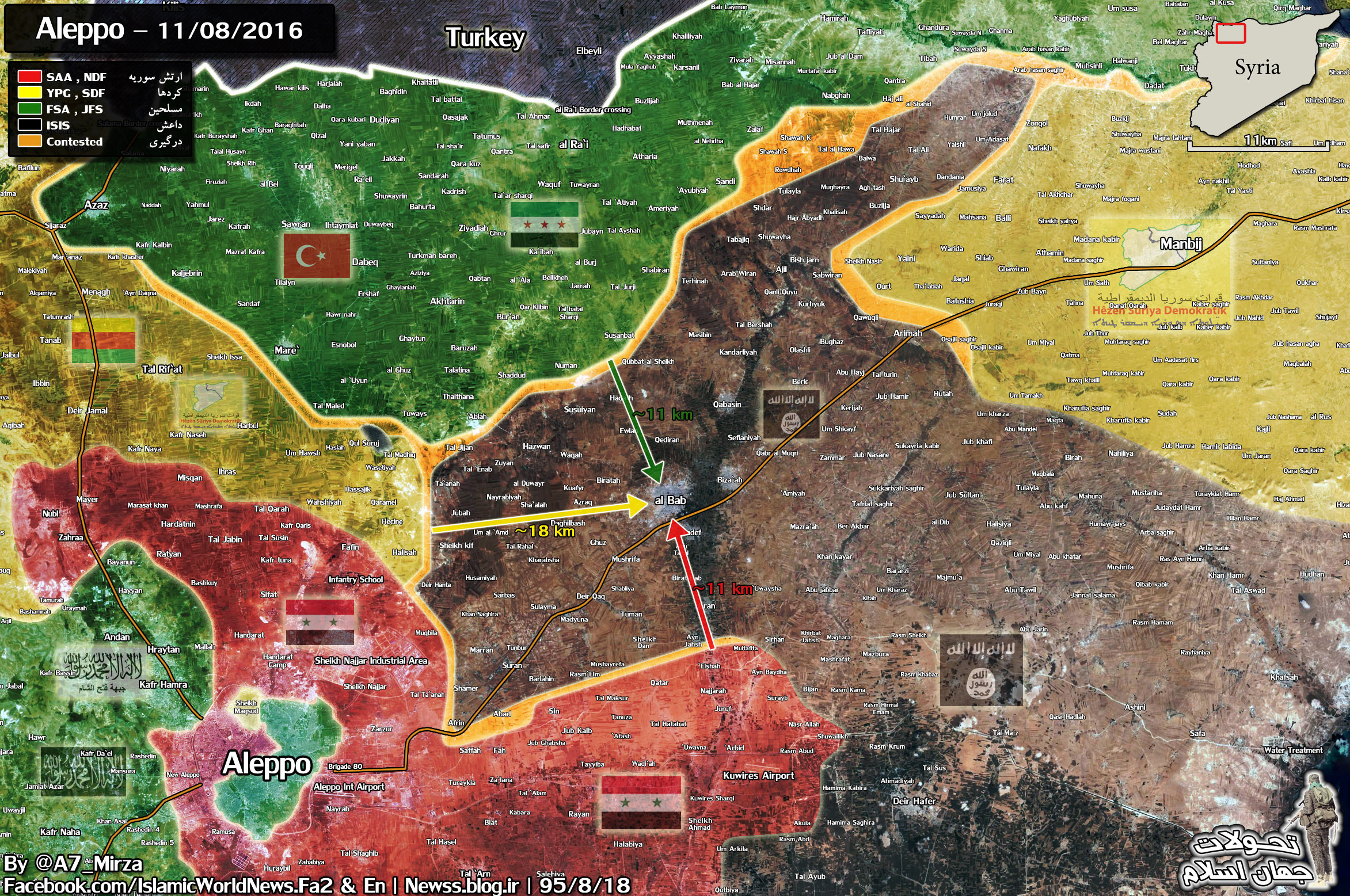 The importance of al-Bab

Al-Bab is a strategic town the Syrian province of Aleppo which is important fo logistics of the northern part of Aleppo. The town’s importance has increased singificantly since the YPG-led coalition, known as the Syrian Democratic Forces, seized the city of Manbij in northern and declared the goal to link up the Kurdish controlled areas from Hasakeh to Efrin. If the YPG seizes al-Bab, Kurdish forces will be able to do this.

Under the pretext of fighting terrorism, Turkey answered to the YPG’s operations with cross-border military strikes on YPG and ISIS targets and the Turkish Armed Forces entered northern Syria in order to support Ankara-backed militant groups in clashes with ISIS and YPG. Amid clashes with the YPG and ISIS, the Ankara-led forces secured the area between Azaz and Jarabulus and launched a push in the direction of Al-Bab. They seek to seize this town, opposing the Kurdish YPG’s strategic goals in northern Syria.

Meanwhile, some Turkish-backed groups declared that the Operation Euphrateus Shield is leading to a phase when the “opposition” will attack the “regime forces” in the city of Aleppo and its countryside. The rumors about clashes between the Syrian army and the Ankara-led forces increased when pro-Turkish militants deployed close to the government-controlled areas in Tal Madiq. The Syrian military responded with some air strikes and warned the Turkish Air Force from air raids in the country without coordination with the Syrian government.

The Syrian government also sees Al-Bab as an important logistical hub, control of which could help the government forces to control the Turkish involvement into the Syrian conflict, to prevent Turkish-backed militants from attacking Aleppo city and to prevent the Kurdish YPG and its political leadership from creation of a semi-independent state in northern Syria. However, the failed advance in Raqqa, when the Syrian army attempted to reach the ISIS-controlled airport of Tabaqa, showed that the Syrian army did not have enough manpower for such operations because of clashes at other frontlines.

Right now all sides of the race for Al-Bab – the Syrian army, the Kurdish YPG and the Ankara-led forces – are in about 11 km from this strategic ISIS-controlled town. Some sources indicate that the Syrian military is unofficially supporting the Kurdish YPG in their confrontation with Turkish-backed militants. The Syrian government allegedly sees the YPG-controlled territories as a buffer zone that will allow the Syrian army and its allies to finish the operation inside Aleppo city, avoding an additional threat from Turkey. The deployment of pro-government Desert Hawk Brigade in the Kuweires airport and the liberation of Infantry school in coordination with the YPG are the signs of this.

With start of the US-backed offensive on Raqqa by the YPG, the tensions between the Kurdis and the Ankara regime are growing because Turkey has been excluded from the coalition involved into the operation. These tensions will impact significantly the race for Al-Bab and could become another excuse for Ankara to use a military power against the rival Kurdish forces in the area.

Well, sometime tomorrow things will be very interesting in al-Bab.

SDF my ass… 80% of SDF is Kurdish YPG. I love how terrorists just change their name and people are like “OH THEY ARE NOT RELATED GUYSSSSS”.