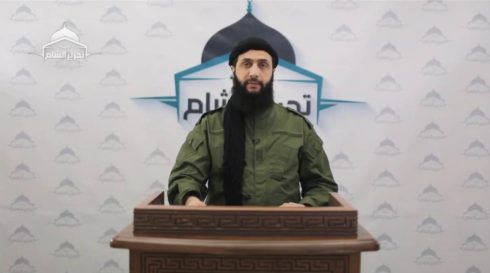 Yesterday evening, a meeting was held between Turkish intelligence officers and the leader of the “Al-Nusra Front” organization, which is classified on the international terrorism list, “Abu Muhammad al-Jolani”, in which they talked about accelerating the process of transferring militants to fight in “Ukraine”.

The adviser of the Syrian-Russian Reconciliation Center, Professor Fadi Ismail, explained that the meeting was held near the “Deir Ballout” crossing, which separates the countryside of Aleppo and Idlib, and was attended by officers from the Turkish intelligence, during which “Al-Julani” demanded to expedite the transfer process, especially concerning the “National Army” militants in particular, who are located in the areas of northern Aleppo, and who have severe differences with the “al-Nusra Front”.

He also said that the goal of al-Julani’s request to speed up the transfer of the “National Army” to Ukraine, is summarized in the efforts of “Al-Nusra” and Turkey to get rid of the unwanted militants in northern Aleppo, and weaken the influence and strength of the National Army, and thus facilitate for “Al-Nusra” controlling the areas of the northern countryside of Aleppo and annexing them to their influence areas in Idlib.

A few days ago, the Turkish forces began to recruit the militants of the factions backed by it to send them to fight in Ukraine against the Russian forces, when the Turkish authorities gave orders to the factions’ leaders to prepare lists of the militants’ names who will be transferred in the first batch and open the registration for those wishing to fight in Ukraine.

Similar to the Libyan conflict and the war between Armenia and Azerbaijan, the Turkish intelligence provided financial temptations to attract the militants, promising them monthly salaries up to /6000/ thousand dollars. So, the offices, which were opened by several factions, began receiving the militants at a time when Ankara have not yet informed the factions’ leaders about the time of the start of transferring batches of militants.

they probably will have less success. There is no protection by Turkey there and they are just fully exposed to all Russia’s artillery power. They would have better luck joining the Axis in 1944

Jihadist scum throw into completely unknown terrain and into a place where they don’t even know the local language or culture would just be throwing them into the jaws of death lol. And that’s good so please continue Julani.

I’m not sure why some people say that Turkey is allied with Russia…but, they do! :D

Turkey has only one ally, itself.

US-NATO is openly a terrorist sponsor and doesn’t even care to try and hide it anymore. That is the stage the US Empire has now arrived at. Terrorist based mercenary armies openly for hire within the US-NATO realm. US-NATO Empire is increasingly behaving like a medieval empire at this point, is that because the US based Khazarians running US foreign policy still think in terms of that age and behavior???

might as well get NATO Erdogon up on war crimes, he needs a bullet between the eyes

HTS earlier called Al-Kaida with NATO troops together against Russia, the intelligent western audience forgot about 9/11 ???

They are openly showing their true colours.

911 only involved US terrorist’s. The rest was Hollywood.

Azovisis snd Turkisis will go home in small bodybags and lunchboxes. One piece at a time…

Time to send S-400 to Syria and Iran and arm to the teeth Hezbollah and whatever groups is against the muricans/turkroaches.

Arm the Houthis with thermobarics and tactical nukes, I’d say!!

Cannot believe the Poles would agree to having to host these barbarians before they get shipped to Ukrainia, but I suppose they will bow down before Masters from the West. I just hope they get there in time so the Chechens can butcher them and roll over them with tanks.

The Turcs like the Khazars hate all other people, they are born psychopats, Putin should make the Bosporus a little wider wit some tacticel atomic bombs, to pas faster with their ships

4 or 5 tactical nukes on Ankara will give them the message. Everyone hates the Turks anyways. China especially, but also India. They only have some Gulf Arab fags who pass them on some shekels.

Now we will have Jihadist mercenaries fighting alongside mercenaries from the USA and UK. Strange bedfellows indeed!

hash
hashed
Last edited 3 months ago by Some1
0
Reply