Presidential and parliamentary elections in Taiwan were the most important event of this Saturday [January 16]. Their results were not: a surprise: a victory of the supporters of independence of the island state, the Democratic Progressive Party (DPP), over the pro-Beijing Kuomintang had been predicted by analysts for a long time. In fact, this is a question of a complete change in foreign policy priorities. If current President Ma Ying-jeou carried out a line on close integration with mainland China, the newly-elected president Tsai Ing-wen (to enter office on May 20) is the firm supporter of rapprochement with the USA, as well as a substantive increase in military expenditures. 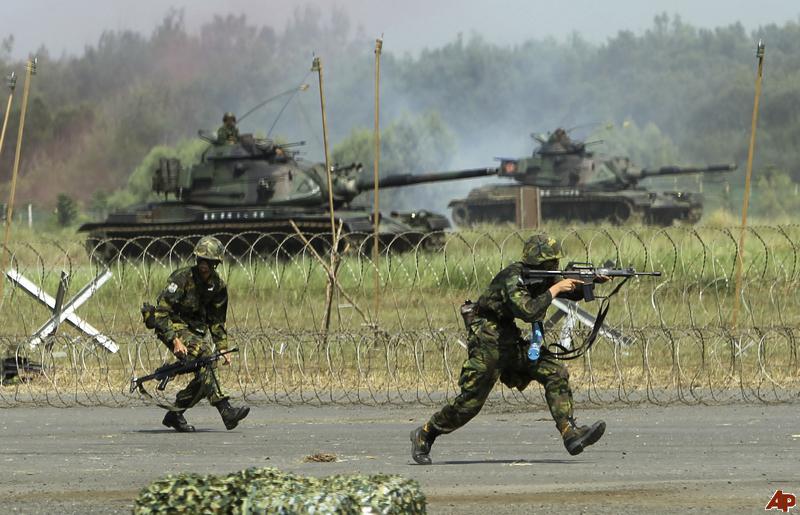 Written by Igor Kabardin, appeared at Topwar; Translated by Carpatho-Russian exclusively for SouthFront

In other words, if the Kuomintang was oriented toward a stage-by-stage but nevertheless still capitulation before the People’s Republic of China, the DPP unequivocally holds course toward winning independence. If necessary, by military means. The victory of the opposition in Parliament is convincing. Of the total number of 113 seats, the DPP received 68, the Kuomintang 35, and other parties and independent candidates divided 9 total seats between themselves. It is symbolic, but the DPP victory took place on the very same day that the leader of neighboring People’s Republic of China Xi Jinping provided the startup of the Asian Bank of Infrastructure Investments.

By and large, the Kuomintang election loss was evident long ago. On Taiwan several generations of citizens have grown up, who consider the mainland counterpart to be a stronghold of authoritarianism, corruption, and backwardness; and the protests in Hong Kong and the large-scale anti-corruption campaign in the People’s Republic of China only play into the hands of these moods. The locomotive of the rejection of mainland China values is the youth who are focused on American, Japanese, and South Korean pop culture and local nationalism. Overall now only a fifth of the population supports reunion with the mainland.

The Elected president Tsai Ing-wen has already announced her first steps: taking the wheel, she will begin to break links with the mainland (economic, political and cultural). Also, it is possible to predict with a high degree of probability the prosecution of leaders of the Kuomintang regarding affairs associated with corruption.

The strengthening of the armed forces, which did not stop even under the Kuomintang, will continue. In particular, according to mass media information, the possibility of acquiring written-off American AV-8 Harrier planes is being considered, and in 2016 the Sky Bow III air defense complexes from domestic production will begin to arrive in the armed forces. But all these are but trifles in comparison with the large-scale rearmament which has been planned by the DPP. Concrete examples and the total number planned for acquisition has not been disclosed yet, but it is clear that the main profit will be made by American military-industrial concerns, and to a lesser extent by European and Japanese.

The plan of the supporters of separation from China is obvious: not to leave Beijing without a war. Since 2005 the People’s Republic of China has had a law on counteracting separatism, which provides for — including immediate use of military force in case of a Taiwan declaration of independence or the creation of conditions which would ensure this independence – a referendum, a test of its own nuclear weapon, etc. The Army, Navy, and Air Force are constantly becoming stronger. In number of ships and aircraft Beijing has long overtaken Taipei, but the reduction of the quality gap is much more dangerous to the island. Taiwan is watch the Chinese aircaft carrier program and construction of the latest destroyers type 052D and 055 DDG with special alarm. It is clear that if these tendenccies remain, Beijing will be able after 2020 to organize an effective sea blockade of the rebellious islands. So military and geopolitical reality will push Taipei to escalation in the next few years while the USA is still powerful on the sea, and contrarily China will feels insufficiently confident outside the coastal zone.

The accession to power of the DPP in Taiwan changes the entire configuration in the Far East towards the USA and, partially, Japan. If under the Kuomintang Washington and Tokyo considered Taipei as an area drifting by default under the People’s Republic of China, now everything is changed and there is a special “first border of defense” which it is possible to supply with arms, naturally on the customer’s account. The more the “first border” holds on, the easier it will be for other players when they at last enter the fight. Paying for this holiday of chaos to Taiwan will be by the fact that according to data for October 2015, the Chinese Republic is registered in 11th place in the list of holders of US Treasury bonds, with $178 billion.

It makes sense also to be reminded of the nuclear weapon. In 1968 representatives of Taiwan signed the Non-proliferation Treaty. However, three years later the Chinese Republic was expelled from the United Nations, so there were no formal occasions to observe the Contract any more. Then the government of Taiwan tried to limit the work of the IAEA, but the Agency quickly discovered that the nuclear program of the island state was far from peaceful nature. Under pressure from Washington, development in this area was curtailed in 1976, but in the early 1980s Taiwan returned to its own nuclear program, which this time was conducted in a situation with much greater privacy. It was no more than a year before creation of its own bomb, when Colonel Chang Hsien-yi, who had unexpectedly fled to the States publicly disclosed the Taiwan nuclear secrets. After this, the then-head of the General Staff of the Chinese Republic of that time, Hau Pei-tsun, was compelled to admit the fact of development of a nuclear weapon. The program was curtailed again only under the pressure of the USA at the final stage. Currently, no military nuclear development is being conducted on the islands of the Chinese Republic, or, in any case, nothing is known about such. Only three civil nuclear power plants are functioning, and construction of a fourth has stopped. However, new president Tsai Ing-wen may return to the nuclear theme at a substantially different technological level.

Another important dimension of what happened in Taiwan is internal political dimension in the People’s Republic of China itself. China is a heterogeneous state. The linguistic, cultural, and economic distinctions between regions here are large, especially in the south. Until now, mass consciousness had the feeling that there is a gathering of the Chinese lands under the roof of a uniform state centered in Beijing — and the policy of the Kuomintang, which was carrying out integration of Taiwan into a common economic space, promoted the maintenance of this spirit. But now, when there is a real alternative to unification, the former illusions are destroyed. For ethnic minorities and regional (including separatist) movements for autonomy, a private defender and an example to imitate has arisen. The very fact of the unpunished emergence of an openly anti-Beijing force in the space of a “unified China” reduces to zero the authority both of the authorities of the People’s Republic of China overall, and specifically of Xi Jinping. The very existence of Tsai Ing-wen in the presidential post of Taiwan, not to mention concrete results of her future activity, is already a destabilizing factor in the entire range from the megalopolises of Guangdong to the sands of Xinjiang. Considering that the People’s Republic of China is in the face of comprehensive calls (for restructuring the economy and fighting against corruption at all levels), even a small push from the outside can move the entire system from equilibrium, and an extended military conflict threatens to send at all into a tailspin.

For independent Taiwan, a critical circumstance is time, which works against it. In two or three years, even with the active help of the USA, it hardly will be able to seriously re-arm and even more, renew and complete its own nuclear program to the logical end. And here mainland China over the same three years will be capable of achieving impressive results simply on account of incomparably great resources. The clock is ticking.

Taiwanese are really dumb to trust the Americans. Regarding the pop culture–them 50-60s are long gone. USA is a basket case.

You are right. The USA has been a basket case ever since the Federal Reserve act was enacted, and the US got involved in the internal European war, which made it into a World War 1. America was founded upon the “Non-interference in other peoples affairs and wars” that is what this country was founded upon.

I hardly doubt anything’s going to change under a new liberal president regardless of what the media or rhetoric are saying. Taiwan industries are continuing to be outsourced to the mainland and economical trade will only continue to grow with the PRC being their biggest exporter and importer. The imbalance between militaries is also following a similar trend. What may ‘probably’, though unlikely, change is Taiwan’s stance on their territorial claim over all of mainland China. What implications this might have in diplomatic relations is anyone’s guess.