Where there’s smoke there is fire. And there is enough smoke coming from the Trump administration about wanting a meeting with Russian President Vladimir Putin that we should take it seriously.

Trump is obviously feeling confident he can weather any storm of criticism for such a meeting from the usual suspects from his opposition before the mid-term elections – the DNC, Congress, the Deep State, or do I repeat myself? 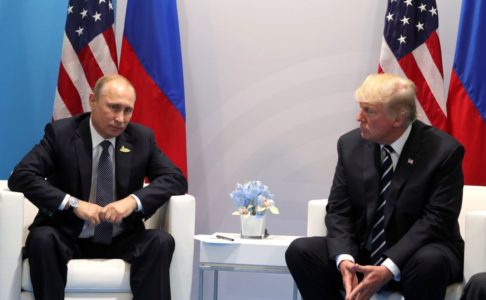 In fact, I would argue Trump is right to continue the peace path in the wake of his success with North Korean leader Kim Jong-un in Singapore earlier this month. The obvious partisanship evinced by these same people have helped to marginalize them with the center of the US electorate.

These are the coveted swing voters that Trump will need to not only secure some crucial wins in November, but also to force a makeover of the GOP leadership going forward for the second half of his first term.

Americans are tired of war. They are tired of being lied to. They want their cost of living to stabilize or, if possible, drop. Both sides of the political spectrum rallied behind the populist idea of more money for the 99% and less money for the 1% in 2016.

That dynamic is still in play. And Trump was smart to undercut his opposition after Singapore by emphasizing the cost and expense of unnecessary war games with South Korea when he canceled them.

A move that was both brilliant domestic politics and brilliant international diplomacy.

It is hard to justify the empire abroad when peace is breaking out on the Korean peninsula. It is also easy to make the case, as he has been, that the US has been paying not only for the world’s defense directly but also indirectly through byzantine trade barriers designed to retard US growth and subsidize the G-7 nations’ social welfare states and their political relevance.

The net effect has been the creation of a tyrannical and anti-democratic European Union which is now not only the biggest debtor relative to its output in the world but also an increasingly unsound political entity which could blow apart at the seams at any moment, taking the world’s financial system with it.

It is for these reasons and so many others that I feel Trump and Putin should tackle the biggest problem in the world right now head on, Syria, and, by extension, the Middle East.

Syria has been nothing short of a disaster for the entire world. It is the breeding ground for most of the hot button issues du jour. The knock-on effects of trying to create a failed state in Syria (and Libya, Egypt and others) are the wedge issues in global geopolitics.

All of it fuels a fugue of manufactured outrage and subsequent virtue signaling by the Cultural Marxists on the Left and the stiffening of resistance to their desire to destroy communities on the Right.

And all of it traces back to a planned invasion of Europe and the US through destabilizing countries in the Middle East and North Africa (Europe) and Central America (the US). Trump and Putin are both pursuing policies that are fracturing the post-WWII political order, albeit in different ways and for different reasons.

Both men see the battlegrounds as opportunities for change.

But, where all of these currents come together is Syria. There is a solution in Syria but it begins and ends with Trump following his peaceful instincts not the ultra-hawkish advice of his advisors and the Washington D.C. hoi polloi.

Every day we stay in Syria trying to maintain the illusion of control over the oil and gas fields in the east and the area between the Golan Heights and Damascus in the West is another day that exposes more of the political center in the US to our mendacity and cynicism there.

Secretary of Defense James Mattis complained this week that Russia is attempting to undermine the US’s moral authority. Sorry, Mad Dog, but you personally are doing that all by yourself by attacking SAA forces to draw out a ‘civil war’ you know you can’t win for unattainable geopolitical goals – the thwarting of Eurasian integration.

But, if there is one thing we’ve seen in the past six weeks or so all the major players in that process are ignoring the US’s demands.

China is stealth devaluing the Yuan to support southeast Asian trading partners beginning to suffer from a rising dollar. It is also committed to buying Iranian oil in Yuan.

India will not only continue to buy record amounts of oil from Iran (up 114% year-over-year in 2017) it will also buy missile defense systems from Russia. And it will do all of this in local currencies, Iranian Rials and Russian Rubles. Meanwhile Gazprom and Iran continue talks to develop gas deposits which would supply a future pipeline to India.

If Trump wants the US to have any say in the future of the Middle East he needs to get off his high horse now and begin crafting a real solution for Syria which stabilizes the country, allowing the millions of Syrians living in Turkey and Lebanon to go home.

That solution, broadly speaking, involves building enough trust in Putin to agree to Russia acting as the guarantor of Iran’s behavior in Syria to allay Israeli fears.

The Russiagate hysteria in the US was designed, in part, to pre-empt this trust-building by keeping Trump and Putin separate and at loggerheads over silly and irrelevant provocations. This prolonged the conflict and tried to escalate it on behalf of Israeli and Saudi regional ambitions. It was a continuation of the long-held Brzezinski Doctrine of central Asian chaos and Russian destabilization/retardation.

Trump has Russia to thank, in part, for his diplomatic victory in Korea. And he needs to start throwing them some bones. They kept pushing, through Foreign Minister Lavrov, the ‘double freeze’ plan which is, essentially what has been brokered.

Otherwise, Putin will go to this meeting offering nothing of substance. He doesn’t need to. In fact, Russia’s role of guarantor of Israel’s strategic position is truly the only thing Trump wants that Putin can or should deliver him.

Putin has been careful and respectful of the situation in Syria by not giving S-300 missile defense systems to Assad. He knows that is a red line for Israel without simultaneous removal of IRGC troops and leaders from Syria.

But, at the same time, those IRGC forces are still needed to clean up the country and ensure SAA gains are not reversed through US and Israeli duplicity.

So, going back to what I said at the beginning, it looks like Trump has carved himself out some breathing room domestically to cleave some more geopolitical Gordian knots.

And Syria involves the same basic problem as North Korea:

How to implement an Iranian version of the ‘double freeze’ if the US doesn’t begin signaling an end of its aggressive encirclement of Iran?

This should be the focus of Putin and Trump’s discussion. Not Ukraine.

Ukraine is not front-burner issue for Trump. Trump’s comments about Crimea at the G-7 tells us he thinks the situation is stupid and should be resolved. All Trump cares about there is how he can worm the US’s way, mafia-like, into the European LNG market.

Good luck with that, Mr. President. I know they taught you about comparative advantage and the Law of Diminishing Marginal Utility at Wharton. But, I’m sure Putin will throw him a bone if need be. That bone will not be Nordstream 2, however.

No. Syria is the game-changer. And like North Korea, Trump needs the ability to declare victory and begin leaving to stifle his domestic opposition, secure a real Senate majority this fall and truly begin reforming an American empire rotting from within.

Why does SF and some other sites print this garbage. Putin will interact with Trump, shake hands, have pleasantries and when it is all over and they go their separate ways one can safely assume that Putin will say to his closest associates “thank God this BS is over with, can’t stand that powerless, lying yankee scum”.

Focus, the only thing Trump can focus on is his image in the mirror.

Its to late, total collapse is now certain

>>that the US has been paying not only for the world’s defense directly but also indirectly through byzantine trade barriers designed to retard US growth and subsidize the G-7 nations’ social welfare states and their political relevance.<<

There have never been less trade barriers as there are now. A system pushed for and designed through the WTO by successive American governments to benefit American business interests. The thing is that by destroying its own industrial base and outsourcing them to other countries for the interests of the 1% the rest gets to pay for it through loss of jobs and destruction of its communities. So don't go blame other countries for it, blame the real culprits, Washington and Wall Street.

“Putin-Trump Summit Should Focus on Syria” Putin also has other major priorities: NATO in the Baltics, Ukraine NATO-isided, the continuous BRITISH & USraeli harassment