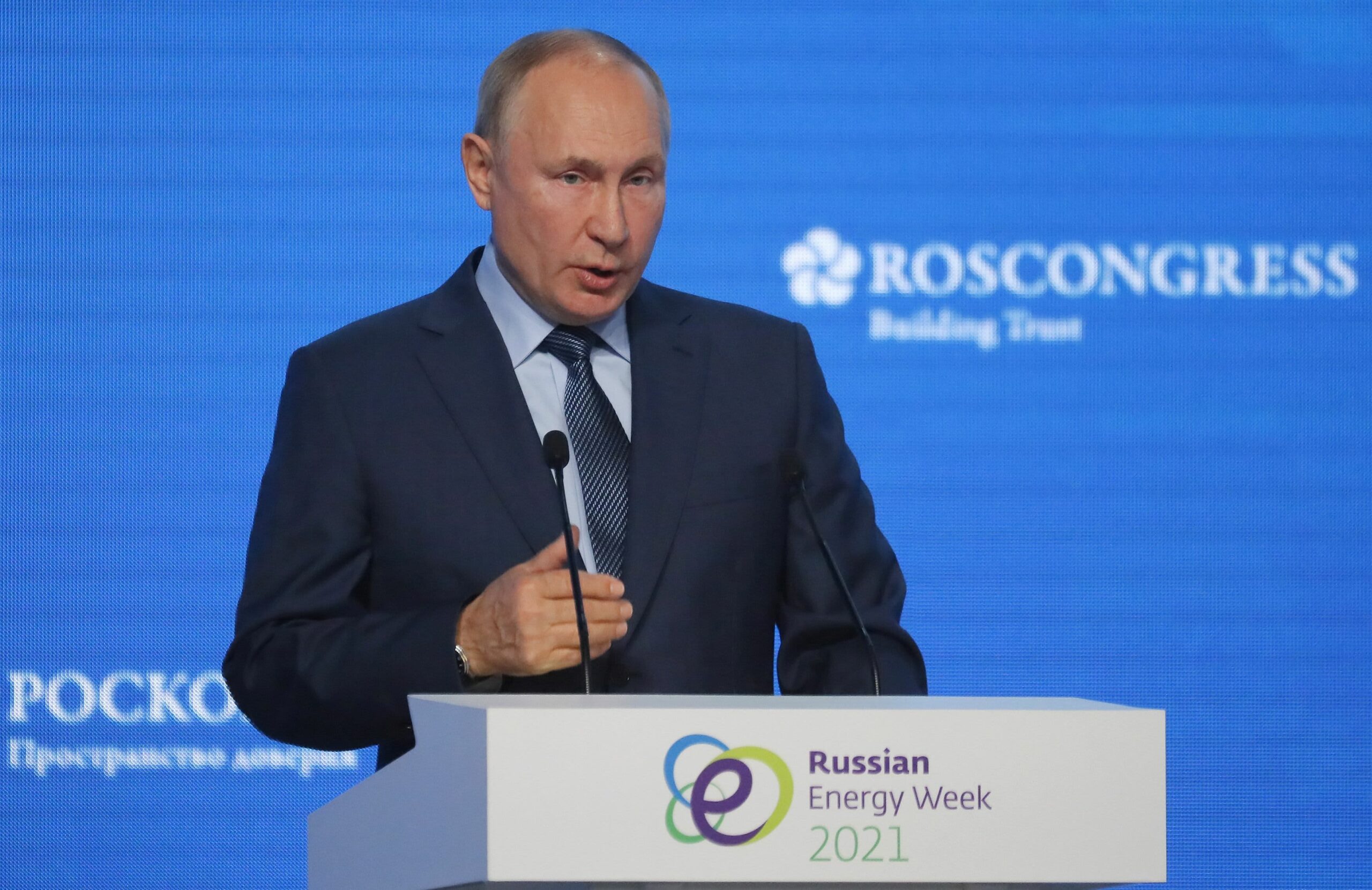 On October 13th, Russian President Vladimir Putin spoke at the plenary session of the Russian Energy Week in Moscow.

He stressed that the rise in gas prices in Europe was caused by a shortage of electricity, and not vice versa.

“And there is no need <…> to shift from a sore head to a healthy one, as we say and how some of our partners are trying to do,” he said.

According to the president, after the last cold winter, many European countries did not begin to replenish their fuel reserves before the new season. They counted on spot deliveries and thus “pushed prices up” even more.

“Sometimes you listen to what is being said about this, you just wonder. <…> As if they don’t see the numbers, <…> they just cover up their own mistakes,” Putin said.

From his point of view, over the past decade, systemic flaws have been built up in the European energy sector step by step. It was they who led to a large-scale crisis, the president explained.

According to the Russian leader, the situation on the gas market – primarily the European one – does not yet look “balanced and predictable.” The reason for this is that not everything in this industry is manufacturer-specific.

“Gas consumers play no less, if not a bigger role here,” the head of state said.

He stressed that Moscow fulfills all contractual obligations to partners, including European ones, ensuring uninterrupted fuel supplies.

“There are all the prerequisites for reaching a record volume of gas supplies to the global market by the end of the year,” Putin said.

Russia as a whole has increased gas supplies to Europe by 15%, he said.

“If we are asked for more, we are ready to increase it more <…>. There is not a single refusal,” Putin added.

According to him, other suppliers, on the contrary, have reduced supplies by 14 billion cubic meters – half of which falls on the United States.

The Ukrainian gas transportation system may not be able to cope with a further increase in transit, Putin said. He recalled that Gazprom has already increased pumping through the Ukrainian GTS: this year it will exceed contractual obligations by about 10%.

“It is impossible to increase any more. Everyone is hinting to us: increase supplies through Ukraine. It is dangerous to increase. The GTS has not been repaired there for decades, there, if the pressure is increased, it will burst altogether, Europe will completely lose this route,” Putin claimed.

According to various estimates, the deterioration of the gas transportation system of Ukraine is about 80-85%, he noted.

“To pump, firstly, we need to bring this system into a normative state. This concerns us and consumers in Europe. This also applies to Ukrainian operators. This is the first thing. Secondly, we must understand how much we can sell. This is very an important question, “the head of state continued.

Russia is ready to extend transit obligations after 2024 and, if economic and technological conditions are created, even to increase it, he said.

“We are ready to keep this contract. <…> But we must understand – how much will they buy from us,” Putin said.

He called the statements that Moscow is building Nord Stream 2 not for economic gain, but to “deprive Ukraine of transit,” nonsense and nonsense, which have no basis at all.

“The opponents of this project said that (it is) economically unprofitable, it is politically motivated, Russia will only lose from this, but for political reasons – in order to bypass Ukraine – they are building both Nord Stream and Nord Stream 2, and “Turkish Stream” <…>. Listen, this is also another nonsense, “soft-boiled boots,” as we say,” Putin stressed.

Finally, Putin said that by 2035, Russia expects to increase LNG production to 140 million tons per year and occupy 20% of the world market. They plan to increase the share in global supplies of petrochemical products from the current 1% to 7%.

“According to experts’ forecasts, on the horizon of 25 years, the share of hydrocarbons in the world energy balance may decrease from the current 80-85% to 60-65%. At the same time, the role of oil and coal will decrease, <…> but the role of natural gas, as the most environmentally friendly, transitional fuel will grow, including the development of liquefied gas production,” Putin explained.

According to him, the reserves of energy resources in Russia are of unlimited, planetary nature.

The Leader of the Free World 🌍 Its pretty sad that EU leadership is si autistic that Putin snd Russia has to protect our interest. If not for Russia whole Europe would be literally in the dark now like Lebanon. The U.S. cant deliver, it never could. They themselves along with the UK are buying record ammounts of oil and gas from Russia. So much to that. U.S. is only interested in keeping the prices high in Europe and bashing Russia 24/7. Always blame the other side with your own crimes, CIA protocol 101…

The U.S. is importing now due to Joe Biden, but you’re right in that the only thing the U.S. could do was to be self-sufficient for awhile. It could have continued for another 20 years or so (based on cheap rates), but Joe’s a hoe for the global “elite.” CIA will soon be gone, as will the U.S.

There is no such thing as freedom. So any country that promises freedom is a lie.

“they just cover up their own mistakes,” Putin said.”

Precisely. As we have seen time and again, resource related “shocks” of an artificial nature are good for the less than 1℅ in new york & london. Volatility = Profits.

” , Putin said. He recalled that Gazprom has already increased pumping through the Ukrainian GTS: this year it will exceed contractual obligations by about 10%. “

Putin is just Russia’s version of Biden. He’s controled by the same people.

Yes, a gang of globalists vying to be at the top. None of them will. satan picks the antichrist, not them. I’m thinkin’ the Obomber, but it could be anyone.

Human nature being what it is, those who assume great power will eventually go too far. The U.S. being a fine example, of course.