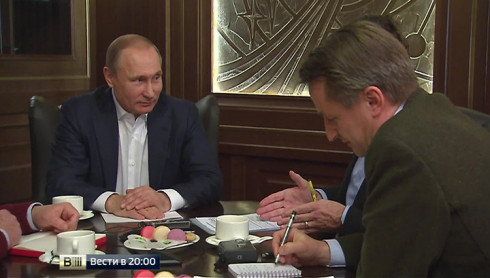 Original by Denis Davydov published by Vesti.ru; translated from Russian by J.Hawk

The reunification of Russia with Crimea was wholly consistent with international law, and the Minsk Agreements are not being implemented due to Kiev’s fault. This is was one of the themes of a big interview with German journalists. While talking to Bild correspondents, the President also explained why Europe remained divided after the end of the Cold War. He also named Russia’s biggest mistake after USSR’s break-up.

The latest Bild with Putin on the cover came out on Sunday night. The authors promise to acquaint the readers with “the thoughts of a politician who as more influential than ever.”

These reporters are such biased idiots, paid by their puppet propaganda master. Putin has more common sense than the whole leadership of the West!