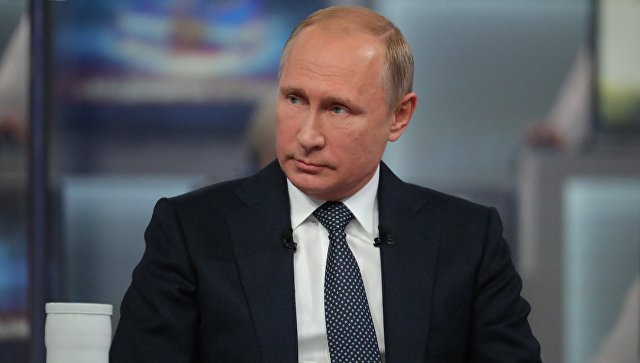 On June 7, Russian President Vladimir Putin is participating in the annual Direct Line Q&A session in Moscow. During the session, people have the opportunity to contact him via telephone, text message or social media.

Answering a question about a possible Kiev offensive on the self-proclaimed republics (the DPR and the LPR) in eastern Ukraine while  Russia is hosting the June 14-July 15 soccer World Cup, Putin send a stern warning that any such offensive would have “grave consequences for Ukrainian statehood.”

“I hope that things won’t get to such provocations but if that does happen, I think that it will have very dire consequences for Ukrainian statehood as a whole,” he said.

He added that people who are considered as Ukraine’s citizens are subjected to shelling.

“Civilians are suffering – notably, civilians. And now, OSCE representatives record an increase in these attacks by the Ukrainian armed forces. Why do this, when you just need to follow the Minsk agreements? It is simply ridiculous from the point of view of realizing the final result of restoring the territorial integrity of the country. The longer and the further this happens, the worse the situation for Ukraine,” Putin added.

Separately, citing Albert Einstein as saying that the World War IV would be fought with “stones and sticks,” the Russian president said that a World War III would mean the end of civilization and accused the US of undermining the parity that helps avert nuclear conflict.

You suck up to Israel, how can you not see that all these issues are linked….?

What makes you think you know better than Putin does?

his mirror…. he ask his mirror “who is the smartest asshole in the whole world” and his mirror tells him; “You are!”

Those who think that Israel/Jews/Judaism is the main/final/only problem/reason of current catastrophic situation of human civilization that is dominated by “western” concept of globalization are either: a) Do not understand what is actually going on in the world. or b) Deliberately pushing “global predictor’s” plan – “tunnel scenario” imposed on human civilization for more than 3k years by “biblical project” wheeler dealers. Those who want to know what that tunnel scenario is about, just have to look into Bible. There will be nothing mystical about fulfilling those anti-human prophecies (which are nothing also but governing concept) but that would not reduce the level of suffering.

Note: Judaizm, Historically established Christianity and Islam (which simply became “export version”(for Goyim use) of Talmudic Judaism) are parts of the same paradigm.

Those who post that Russia is “suck up to Israel” are either delusional (that’s understandable) or deliberately work against Humanity.

It was Jewish oligarchs who took over the government and soros did his famous color revolution, Yhe. it was the Jews 100% fact. getting kicked out 1030 times in history should raise some legitimate red flags.

I’m not saying that zionism is not a problem. It is but that’s just an integral part (large part) of what is happening. Do you really think that if tomorrow all Jews will be sent to another planet than fair society will be automatically established on Earth? Again – Talmudic Judaism is an evil cult but it’s absence would not change much if the world keeps developing under current governing concept (biblical project). Do not think that it’s the Jews who “invented” it – this is way over their head. They are willingly serving it but they are merely an instrument. Don’t get me wrong – I’m NOT against the teachings of Jesus Christ but I’m confident that historically established Christianity is very far from true teachings of Christ.

believe it all you want.

there are plans much larger than israel.

That’s it Mr, Putin tell them what will happen to these Neoconic-Nazi motherfuckers if they continue their propaganda against DPR or LPR in Donbass.

Russia dont need to suport Donbass army in case of offensive…just send Russian army to take kharkiv the second largest city of Ukraine, near Russia and full of etnic Russians and end of the problem!…anyway Porky knows once Nord Stream 2 be operational…Russia will cut Gas supply through Ukraine…it means the end of this pseudo state backed by NATO!

It will probably be kidnapping of the Jewish Oligarchs who caused this, so Im guessing a Naval invasion.

once Nord Stream 2 be operational…Russia will cut Gas supply through Ukraine.

old story. the new is, that not.