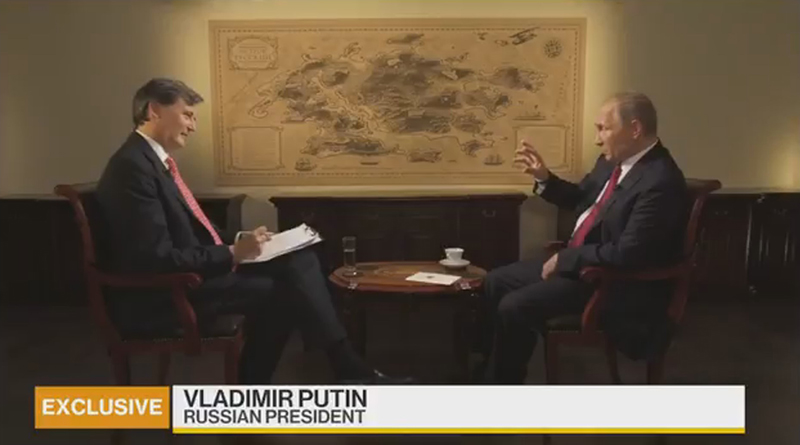 A screenshot from Bloomberg’s video

Overnight the debate over the fate of the OPEC oil production freeze got a new and unexpected entrant when Russian president, Vladimir Putin said he’d like OPEC and Russia, producers of half of the world’s oil, to reach a deal to freeze supply and expects the dispute over Iran’s participation can be resolved. As Bloomberg first reported, Putin said that “from the viewpoint of economic sense and logic, then it would be correct to find some sort of compromise,” speaking in an interview in Vladivostok. “I am confident that everyone understands that. We believe that this is the right decision for world energy.”

Just as surprisingly, Putin sided with Iran saying that oil producers recognize that the middle-eastern nation, which has mostly restored the output halted during three years of trade restrictions, deserves to complete its return to world markets.  While talks collapsed in April over whether Iran should join in, countries now recognize the nation – freed just months ago from international sanctions – should be allowed to continue raising production, Putin said. The Russian president said he may recommend completing the plan when he meets with Saudi Deputy Crown Prince Mohammed bin Salman at the Group of 20 summit in China next week.

“Iran is starting from a very low position, connected with the well-known sanctions in relation to this country,” Putin said. “It would be unfair to leave it on this sanctioned level.”

The Russian, whose economy is just as reliant on higher oil prices as the recently financially strapped Saudi Arabia, said that “I would very much like to hope that every participant of this market that’s interested in maintaining stable and fair global energy prices will in the end make the necessary decision,” said Putin. Prince bin Salman “is a very reliable partner with whom you can reach agreements, and can be certain that those agreements will be honored,” he said.

As Bloomberg observes, the world’s biggest energy exporter, Russia is reliant on oil and natural gas for about 40 percent of its budget revenues and battling the longest recession in two decades as crude prices remain below $50 a barrel. Burdened by social spending and military commitments, the government is seeking ways to ease the budgetary pain before parliamentary elections later this year and a presidential vote in 2018.

Russian Energy Minister Alexander Novak had been a lead player in secret talks with OPEC producers at the beginning of the year, which culminated in a meeting in Doha in mid-April. The agreement collapsed just hours before it was due to be signed when Prince bin Salman insisted on Iran’s participation, leaving Novak diplomatically exposed. “Our Saudi partners at the last moment changed their view,” said Putin. “We didn’t reject the idea of freezing output. Our position hasn’t changed.”

Putin’s statement caught many by surprise because until now, Russia had sounded wary of giving the proposal another chance. Novak said yesterday that no accord is necessary given current price levels, according to a report by RIA Novosti. Oil rallied modestly following Putin’s comments.

OPEC nations are scheduled to hold informal talks on Sept. 27 in Algiers, on the sidelines of an industry conference, the International Energy Forum. Novak is due to attend the conference. Oil has rallied more than 10% last month on speculation the Organization of Petroleum Exporting Countries will reach an accord with non-members at an informal meeting in Algiers this month, before fading much of the gains as it became apparent that many members, including Nigeria and Algeria but especially Iran and Iraq, were seeking exemptions from the mandatory production freeze, and would press on with plans to restore lost output or add new capacity, undermining the point of a supply cap.

The prolonged slump in crude prices, stuck at half the levels seen two years ago, is battering the economies of producer nations, giving oil-market rivals cause to cooperate.

Even if a deal is concluded, analysts from Commerzbank AG to Citigroup Inc. warn that simply capping output at current levels, rather than cutting production, would do little to tackle the persisting surplus in global markets. Besides, most of the countries involved are already producing as much as they can, making a pledge to keep output flat irrelevant, they say.

In conclusion, even as he endorsed a freeze, Putin left himself a similar loophole, because while supportive of a limit, Putin’s remarks indicated that Russian production has the potential to increase. “The oil companies, they are continuing to invest,” he said. “Our oil output is increasing.”