A Russian Aerospace Forces Tupolev Tu-154 surveillance plane filed over Washington on Wednesday. The plane traveled near the Pentagon, the Capitol and other government buildings.

The flight was under the Treaty on Open Skies, which Russia, the United States and 32 other nations have signed.

I trust ’em and I believe there is NO modern country that would start a nuclear exchange, because there would be to much damage, and how in hell can we or anyone ‘make a buck’ on an Atomic war ?

No one would want it, yes. But what if the leader of a nuclear power is forced to decide between officially retreat with the tail between his legs or save his (and his country’s) pride while choosing the next escalation (hoping the other one wouldn’t retaliate)? Are we already in this spiral?
The cuba-crisis was luckily only solved due to the Soviets keeping their promise to keep the US disabandment of its nukes out of Turkey secret. Therefore Kennedy could have saved his pride and the Sowjets lost it, but acchieved something geopolitical.

If he was Imperial Japanese :D

THIS IS A FAKE PIX !
It was a TU 214R trying to gather some intel on Donald and Hillary :D 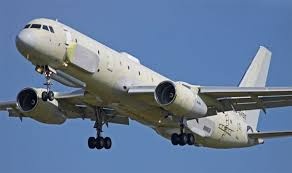 They should have blared this whilst flying over…..