Russian President Vladimir Putin has three disinfection tunnels, one at Novo-Ogaryov, his official residence, located in a Moscow suburb, and two others at the Grand Kremlin Palace in Moscow, reported Russian news agency Ria Novosti. 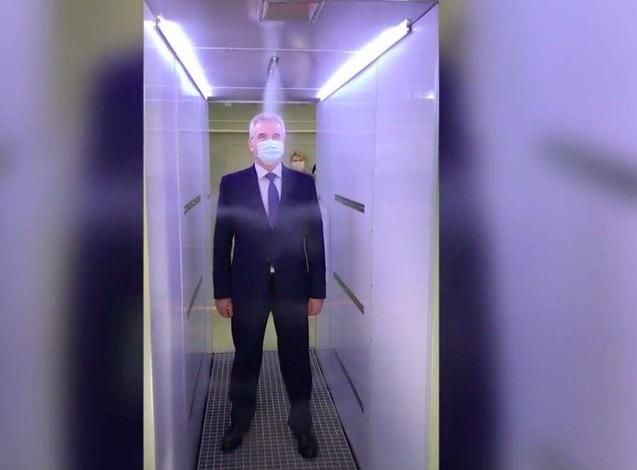 Reuters published a video showing how the tunnel sprays a “fine water mist” covering the clothes and exposed areas of the occupant who steps through with a disinfectant solution. It was noted by Ria Novosti, that anyone who visits Putin will have to step through the tunnel.

The report made no mention of the type of disinfectant solution used. However, in two past reports, we noted the solution could be “a fine mist of water and nitrogen” or electrified tap water that produces a hypochlorous acid (which is an environmentally friendly disinfectant that kills bacteria and viruses).

Putin’s tunnels were designed and built by a firm in western Russia. The three were installed in April as confirmed virus cases and deaths exploded across the country. 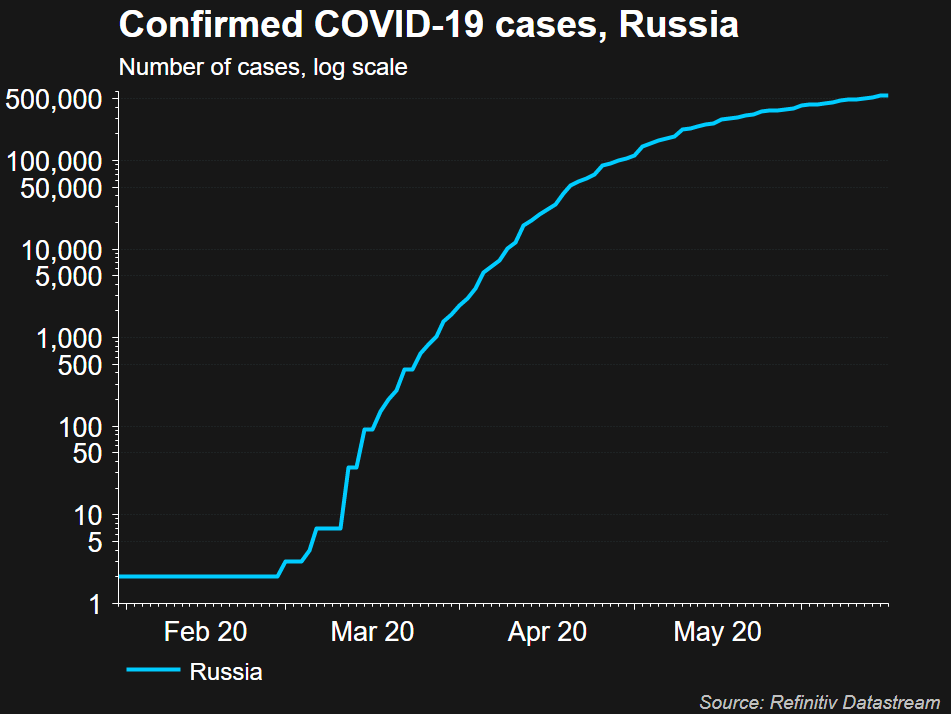 COVID-19 number of deaths in Russia Dmitry Peskov, Putin’s spokesman, said the tunnels were installed at the height of the pandemic — he noted, lockdown restrictions are being eased as cases and deaths decrease.

At some point, these tunnels are coming to America — could be seen at stadium entrances.

President Putin is taking a very sensible path as the leader of Russia, especially in these tempestuous times.

Boris Johnson should have done the same as Prime Mister and practices what he was preaching before he himself was a victim. :)

The fine mist would have messed up Boris Johnson’s hair. He’s kind of sensitive about that.

lol, its all bullshit! All countries (And i mean ALL) are pushing propaganda and fake results to scare the citizens of their nation as a way to power grap, ask them to take state run and owned vaccines, get a tattoo or microchip implanted in them which will enable them to travel but also be tracked!

if u support this u literally support evil!

The NEW official death rate of COVID-19 is now 0.02% The common flu is 0.01% Even if u are a carrier BUT do not show symptoms, u gave almost ZERO chance of spreading it!

So if we dont shut down society with the common Flu then why are we doing it for Covid-19? Corona virus has been around for 50 years!

its all bullshit! You think if russia and china do this then it must be real? its a globalist lie! pure media propaganda headed by the WHO which are the globalist jews u all hate so much! but here u are cheering it on

You might as well have 100 since the virus is fake in the whole pandemic is contrived. Putin has exposed himself as a fake leader by going along with this nonsense.

Exactly, why is most of the world playing this game ?

Best guess is consolidation of resources and power like usual, why does anybody lie, cheat and murder?

i don’t know…. Two people I know personally have died in the 3 days, saying it was the covid that got them. One near, the other on the other side of the country.

Co vid is Multiple viruses that cause influenza and Pneumonia. This particular 1 which they don’t test correctly for it’s no worse than a mid to mild influenza. Don’t believe me check the statistics even if you use the government statistics which are not correct over inflated you’ll still see that this is not a pandemic this is not a threat. The threat comes from our governments that are now part of a 1 world government.

Man we need to break away from traditional medicine’s paradigm to stop all this bullshit. Traditional medicine and science is clearly just another asset for the elites, and meanwhile there are people with good intentions and seeking for the truth within those disciplines, evidently they make for a minority and the BIG MAJORITY of scientists and doctors TRUST BLINDLY on the current paradigm and don’t judge it with critical thinking.

The PCR was demonstrated decades ago as incapable to measure virus quantity and yet it’s been massively used in this pantomime as diagnostic test.

The exosomes are not virus; the scientists are taking the exosomes as viruses while these are normal parts of the cells involved in reaction schemes to different stimulous, tasked with communication between cells, but uncritical scientists go crazy thinking these come from outside the body.

It’s been demonstrated time and again that there’s no such thing as contagion, if the person is not mentally and emotionally open to get a disease whatever this one is, and this includes AIDS for example, which was “discoverd” by very corrupt scientists.

There’s, apart from hundreds of other disciplines and other kind of medicine’s that differ in view with our beloved traditional medicine, one scientific-oriented medicine, the New Germanic Medicine, that has a scientific paradigm and uses the scientific method, but it’s not corrupted to the core, that has found the viruses are a hoax. With tons of proof. With verifiable studies

And this all makes me think that China’s leaders know about this hoax and are either using it in their favor and this will make them the big winners out of this mess or they are compliant with the global elites. No matter who likes it

The virus is dangerous to the 1% of the population that is very old and very sick. To everyone else it’s of little threat. The exploitation over reaction to the virus is a far greater threat to society than the virus itself.

The problem is that the virus is probably a synthetic gain of function bioweapon that either escaped from a level 3 or 4 biolab, or it’s a bioterror attack. And there are published plans and statements to escalate the bioterror attacks for purposes of depopulation and omnicide by malevolent people to transition to a post human era. As described by Alex Jones and others in their analysis.

My research indicates that these plans and efforts are almost exclusively of Jewish and Zionist origin. Which is in character with their demonic, Talmudic and Zionist ideology. Such as the Rockafeller study written by Jews that describes the Covid19 scamdemic in great detail before it even happened.

The question is how to deal with this issue so that it doesn’t escalate to a deadlier bioterror attack that is used to further depopulation and omnicide. Defensive measures like those described in the article are one method. Preemptive offensive measures to identify and mitigate the malevolents involved in criminal activity who are likely to carry out an escalated campaign of depopulation and omnicide using bioterror and other methods also needs to be part of the threat management procedures.

How about feeding the psychopathic f’king ‘leaders’ responsible for this into a woodchipper feet first? I’m not sure who is responsible, but I really have no need for either the political elite nor the oligarchs of any nation. I say we just start feeding the worms with the biggest ones first. If there’s a God, she’ll probably understand.

You’re welcome to try to prove that.