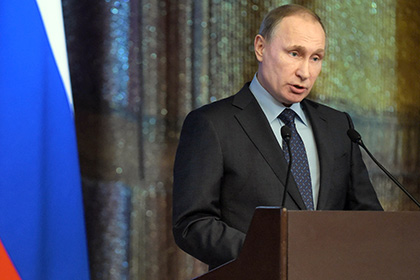 Russian military forces in Syria are destroying militants who have openly declared Russia to be their enemy and who do not conceal their plans to expand their activities onto territory of CIS countries, said Russia’s President Vladimir Putin. This statement was posted on February 20 on Kremlin’s web site.

“Our armed forces ought to be in constant readiness to quickly and appropriately react to potential threats, counter any provocation and aggression,” Putin said during his speech marking the Fatherland Defender’s Day celebrations at the Kremlin.

The Supreme Commander said that “the combat operations performed by Russian pilots, sailors, and support troops deserves the highest of praise. “In spite of difficult conditions, they are helping Syrian government forces and other participants of the struggle against terrorism to defeat the militants, save civilians from violence, barbarism, and anarchy,” the head of state added.

Putin emphasized that Russia has always sought to resolve all conflictual problems solely through political and diplomatic means, and has helped put out the fires of conflict in the Middle East on more than one occasion.

In his words, “Russia’s army has served as a firm bulwark of the state, a guarantor of stability, sovereignty, and territorial integrity of the country, symbolizing its national dignity and power.”

J.Hawk’s Comment: The implications of framing the conflict in this fashion is that it pretty much excludes any organization that has called for attacking Russia in the past from participating in negotiations on Syria’s future. And that’s a pretty broad list that includes many of the Turkish and Saudi and Qatari proxies with whom evidently no ceasefire is deemed possible by the Kremlin.

This reformulation is typical to the Russian style of diplomacy practiced both concerning Syria and Ukraine, whose principle can be formulated as follows: “you either negotiate in good faith now, or you will do so in the future, once your back is pressed against the wall more firmly.” The clear message is that it was a mistake for the “moderate opposition” to walk out of Geneva. Should they make that mistake again, pressure will be ratcheted another notch

There is so many “explanations” of what Putin has said that no one alive can draw a single correct, deeper conclusion by reading between the lines. My understanding is that Putin has announced here Russia’s change of strategy where purely defensive character of their armed forces will be somewhat adjusted to allow for quick and decisive power penetration to protect the security and perhaps wider interests of the nation. This alone is a tectonic shift in the global relations as it announces to the “free world” that their strategic games and regime changes will come to an end, question is how quick this will be put into practice?

ZP, I have the same feeling. When I hear “destroying […] who have openly declared Russia to be their enemy” I cannot but thinking of Poland, Lithuania, Estonia or Ukrainian nationalist (both the hard-line nazis and the moderate nazis). Considering that Putin will around for a decade more and he’s not the hawkist in Russian power spheres, I wonder that “future”…