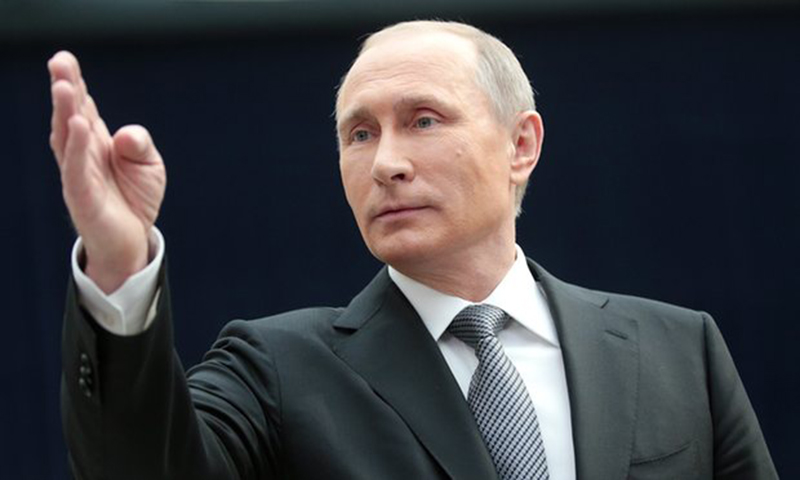 Earlier in the day, the Russian General Staff requested Putin to allow to strike militant targets in the area.

SF recalls that heavy clashes in western Aleppo have been ongoing since today morning when the joint terrorist forces launched a wide-scale offensive on the Syrian army.

Why does Putin scale back as soon as Assad is on the brink of victory? This constantly keeps repeating itself. It’s almost as if Putin wants to drag out the war for as long as possible. Can anyone give any other logical explanation? Considerations for the safety of civilians are just excuses, every time Syria is on the brink of a major victory Putins calls off air support to ensure the terrorists regain their strength.

It means they give up. Time to pack and go home, Russia. Its a good thing Russia has so many nukes as that seems to be the only threat Russia has anymore to the West. But maybe they are all duds too?

I really don’t understand it, if Putin was a shill working for Zionist interests he wouldn’t have gotten involved in Syria in the first place as Assad was heading toward defeat and the Zionist Oden Yinon Greater Israel Project would have gone ahead as planned. But now that he’s involved he doesn’t seem to want to finish the job as evident by constant unexplainable pauses.

Why does Putin allow the terrorists to regain strength every time they’re on the brink of destruction?

He just want to bagrain with the west and to get as much for Russian oligarchy,When westerns really treateted him ,he just runed away

Let me make clear on one thing: if putin wants to defeat alqaeda in syria let him send 150 aircrafts ,100 tanks and 100 multiple rocket launchers then they have to concentrate in one area when it is completed another area ,one by one. But taking this way to refuse helping syrian army who are fighting against more than 400k foreign mercenaries and 250k brainwashed syrian children are wrong thus shows us how coward is putin.

your name changes, but not your biased comments. How many nics do you use now?

Paper tiger.After western treated him ,for war crimes he runed away like little mouse.

I have no idea why this is happening. It defies what would seem logical. May be SF can explain.

You misread. The airstrikes are not restarted on EASTERN ALEPPO only. But Russian airplanes bombed and are still bombing western and southern Aleppo.

None of us are there with the secret intel. We can be certain that Putin knows a lot that WE don’t.

Abkhazia and South Ossetia (that were only recognized after the 2008 war), Transnistria and the Republics “ukraine” have all seen a policy of “freezing” conflicts. This is to appease the (((Powers That Be))).

Putin is using the conflict in Syria to score political points with certain European countries, driving a wedge in their NATO and EU unity; as US tried to isolate Putin and make him a pariah, Putin is politically active, sowing discord between US and the Europeans. The meeting in Berlin facilitated some form of a deal or agreement, I am sure Putin in not slowing down in Aleppo because of war crimes and other absurd allegations. It is possible that he is giving the civilians an opportunity to extricate themselves out of that zone, or allow some relief to reach East Aleppo.

I think your correct but not just for the Europeans but also the middle east and world stage. He has come across as a leader that stands on the side of international law while many other vial world leaders that have been funding terrorism. NATO should have been disbanded in 1991, the only purpose it does now is to be the strong arm for the new world order. The demands the US and it’s sinister partners impose on the rest of the EU with sanctions imposed on Russia are also hurting themselves. It’s madness and people are awaking to the fact

Vladimir Putin’s annual address at the Valdai Discussion Club, held in Sochi, Russian Federation. All leading journalists as well as scholars, both Russian and international, are invited to attend – whether they do is another matter. This is of course not the first time he says such things – in fact, Putin has been saying them for many years.

Saw several of these on RT during the last few years. Imagine a US President participating (publically) in the same type of venue.

All of us peasants are not allowed to be close of enough to speak and have interactions.

BUT, I believe in Putin. he’s solved more complicated things before, and i absolutelly believe in his intent to fight terrorism.

as for why? who knows. maybe Syrians are getting too cocky with demands to pressure the Turks out of north Syria. or maaaybe, he is emboldening the terorrists to launch an all-out attack so then the air force will obliterate them. maybe he even made a pact with USA (he should be smarter than that, though) to align…. naaah, that’s not true.

but there still is hope (hope, nothing more) in SAA artillery and in SyAAF, who must be working full throttle. and if they don’t they should.

SAA strategy and units exibit a different behaviour recently; much more lethal and thorough. it seems russian training paid off. so there is hope.

Some people are mistaken. Putin refuses to restart airstrikes INSIDE eastern Aleppo, but not in western Aleppo. Russian airplanes did strike the jihadi positions the last few days…

Why the Russian generals asked Putin to start again the East Aleppo mission`?PUTIN LET THE GENERALS TO DO THEIR JOBS.

PR Business: Putin = Good Cop, Army Generals = Bad Cops… and to show the masses who makes decisions in Russia. The truth is that it is of no strategic value to be hasty in bombing an area totally besieged, it will just cause more suffering among civilians which most are held hostages… The terrorists inside Aleppo are outgunned and are putting their last hopes on this desperate operation by their fellow jihadists outside Aleppo to break the siege. And that won’t happen because both Russia, Syria and allies are concentrating all their fire and manpower on the outskirts of Aleppo (both RuAF and SyAF are bombing the crap out of them in those areas). When the assault will be foiled, let’s say in some days… the rats inside Aleppo will eventually start to lay down weapons and consider evacuation corridors. We could as well expect infighting between the various factions holding east Aleppo suburbs.

Finally some smart talk here. I don’t even know why people that just ignore strategy are commenting in a military and strategy content website.

I am not sure if the rats in Aleppo will lay down their weapons when the jihadi offensive in south western Aleppo fails. The battle of East Aleppo has significant world wide attention, the western powers do not want those rats to be exterminated.

Pampi it might be to do with the UNHCR that russia got voted out of, Putin will have a plan to get back into UNHCR, and stopping the bombing inside east aleppo might be part of it. its good to see some people actually know whats going on and your one of them.

Putin knows that as far as the west in the UN is concerned, the only thing Russia could do to please them would be to submit on it’s knees. The Russians getting back into the political tool called UNHRC has nothing to do with this, as Putin knows he will be called names no matter what. It’s a TRAP for ISIS.

“For some people, it is their job to under-inform you” – Putin. If you aren’t already, one should be very skeptical of what they read in Western mainstream media in regard to geopolitical events, given it has become exponentially obvious that the Fourth Estate is obsolete.

Today marks the day Aleppo is lost. Watch now as the rebels storm though SAA neighborhoods like a hot knife through butter.

Today all the Russian generals are very furious.You can stop the attack of the army after to start again and after again cease-fire.The moral of Russia army will be very down if will start to have and casualties see the army take the situation in his hands.

Woolsey and Rothchild own 90 % of the media in the world . Their media makes the police action of eliminating terrorists in Syria a bad thing , while the same action in Iraq is a good thing . Putin is smart enough to deal with it , by giving them a , “no case situation” . East Aleppo is not a big area, and mortars should be able to produce the same result as air strikes , even if it takes multiple strikes . The air force is needed outside of Aleppo , to the southwest , and northwest , as well as Hama , Days az Zor , etc.. I may have misread it , but I think the strikes are only not allowed on the city itself .

Russian economy is in bad shape, new-oligarchy is like the old Yeltsin s one,NATO is at the gates if Putin will continues to retreat his popularity will decline in Yeltsin s level.

How’s the weather in Langley ? Man you read too much the New York Times…

Could he be waiting for the reinforcements on the way from the Barents Sea?

Russia now accuses Coaliton from war crimes in Syria at UN. According to RF defence depart., Airstrikes were stopped over 10 days.