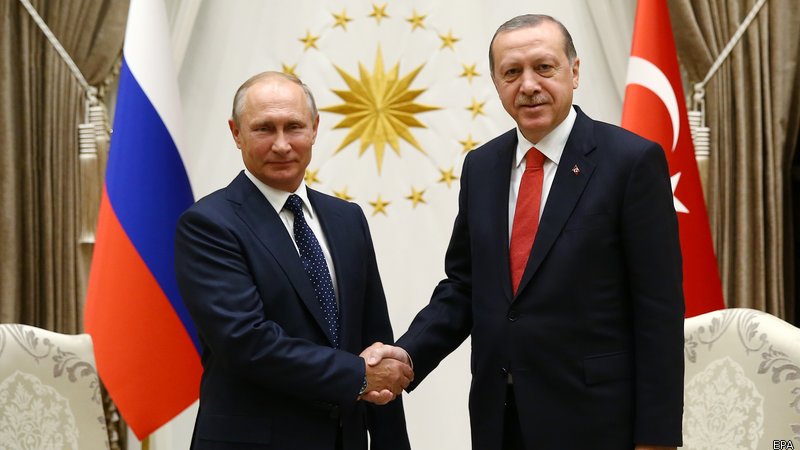 Vladimir Putin and Recep Erdogan pose before their meeting in Ankara

On January 31, Turkey’s President Tayyip Erdogan and his Russian counterpart Vladimir Putin hailed the decision taken within the framework of the Sochi conference to form a Syrian constitutional committee during a phone call, according to the Turkish Anadolu Agency. The source added that Erdogan called the decision “an important achievement”, but acknowledged that there were some problems during the conference.

The Syrian opposition and the Damascus government agreed during the final session of the Sochi conference on January 30 to form a Syrian constitutional committee. It will include members from the two sides and representatives of Russia, Turkey and Iran.

Reuters reported that the two presidents also agreed to step up efforts to establish observation posts in the northern Syrian governorate of Idlib.

On January 29 and 30, Turkey attempted to establish a new observation post in the town of al-Eis in the eastern Idlib countryside. However, the Turkish attempt failed when a booby-trapped car targeted a Turkish Army unit north of al-Eis killing one person and injuring two others. This incident forced the unit to withdraw.

Anadolu revealed that Erdogan briefed Putin on the ongoing Turkish Army military operation against the Kurdish People’s Protection Units (YPG) in the Afrin area, which was launched on January 20. The news agency didn’t provide details regarding the information that was shared with the Russian president.

The phone call echoes the strengthing Russian-Turkish coordination in Syria and proves that the relationship between the two countries were not affected by the latest development in northern Syria as some pro-opposition sources had suggested.

>>Erdogan called the decision “an important achievement”, but acknowledged that there were some problems during the conference.<<

Sounds to me like diplomatic code that Crazy Erdogan is not quite getting what he wanted. I can live with that.

I’d love to know what mad dog Mattis thinks about his great plans for Syria going up in smoke,lol

Mad Dog Mattis has allegedly contracted the makers of a well known US Video Game to create an alternative digital ‘reality’ to the actual Facts on the Ground in Syria :)

The results will be given to Nikki Haley to show to the UN in a special viewing .

And as everyone knows everthing that Tranny, NIKKI HATELY, that represents israhell at the UN,ONLY speaks and shows the TRUTH.

Erdo-psychopath has no right to be in Syria “fighting terrorists”. Not long ago he’s been trading oil with terrorists and has fed jihadists over the border from Turkey to Syria. If I was Putin I’d have felt tempted to take a good swing at his ugly face. A Judo master wouldn’t do that of course, but I can imagine Putin must have had this thought :D

@Southfront. I was perplexed and amused at the title if this report. ” PUTIN AND ERDOGAN DISCUSS SOCHI CONFERENCE AND DESOLATION ZONE IN SYRIA’S IDLIB ”

Was the term “DESOLATION ZONE” used in error for ‘De-escalation Zone’ or is the title a Freaudian Slip, LOL.

You are doing a great job by the way SouthFront and I am not mocking your work . It is important though that you limit the opportunity for your detractors to mock your output due to a lack of Proof Reading. There are many able minds here who would assist in doing this if you need assistance.

I was about to ask what “desolation zone” mean : )

Examples Desolation Zone’s in the past few months have been Raqqa and Mosul John :) , with the common denominator being the American Air Force :)

I think they mean to say De-escalation zone. However desolation zone is closer to the truth

On the black humor side, you can’t deny “desolation” could be kind of a fitting term in some occasional “de-escalation zones”. :DDDD

Sochi is really a meeting between putin and erdogan. Everyone else attending did not matter. They agreed to a division of Syria including idlib, afrin, and manbij.

I’m not sure Syria will ever regain the city of idlib, certainly they have lost Jisr alShagoor to Turkish control. The status Of Saraqib and Morek are unknown at this point as well. Also unknown: will turkey ever attack manbij. Putin would love to see that.

Leave Putin and his thoughts…. to himself… Maybe he prefer the turkish beasts instead kurdish-CIA-groups…….

Mad Men on the loss.Bloodthirsty vendetta on Kurdish human rights.What do they think tomorrow is going to bring.