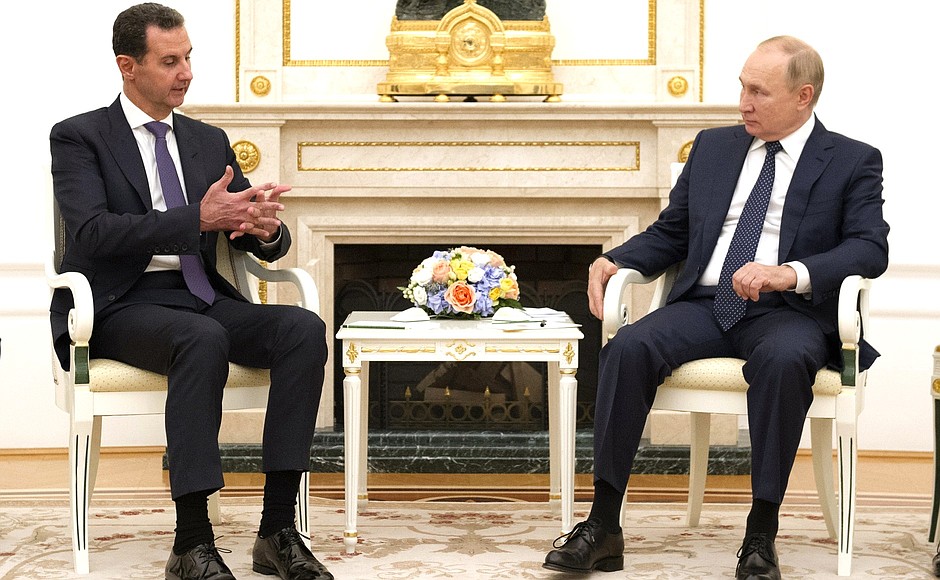 For the first time in 5 years the meeting took place in Moscow.

Putin also praised President Assad’s renewed grip on the country after a decade of fighting.

The Kremlin quoted the Russian president as saying:

“Terrorists had sustained a very serious damage, and Syrian government, headed by you, controls 90% of the territories.”

However, he reportedly warned that foreign forces being deployed in Syria without a decision by the UN were a hindrance to its consolidation.

“I believe that the main problem lies in the presence in some parts of the country of foreign armed forces without any mandate from the United Nations or your permission, which clearly runs counter to international law and undermines your ability to use your best efforts to consolidate the country and promote recovery at a pace that would have been possible, if the legitimate government controlled the entire country.

Regrettably, there are still some pockets of resistance, where the terrorists not only control part of the territory but also continue to terrorise peaceful civilians. Nevertheless, refugees are actively returning to the liberated areas. I actually saw during my visit, which I made at your invitation, that people are working hard to rebuild their houses and resume a peaceful life in every sense of the word.”

President Assad also thanked Putin for sending aid to Syria and efforts to halt the “spread of terrorism”, the Kremlin said.

“Our two armies, the Russian and Syrian armed forces, have been striving for and have achieved considerable results not only in the liberation of the territories occupied by the militants and in wiping away terrorism, but they have also facilitated the return of the refugees, who had to flee from their homes and their country.

Since international terrorism knows no borders and is spreading around the world like a virus, I can testify that our two armies have made a huge contribution to the protection of humankind from this evil.”

He praised what he called the success of Russian and Syrian armies in “liberating occupied territories” of his country and described Western sanctions as “antihuman” and “illegitimate”.

Support from Russia has helped President Assad regain nearly all the territory lost during the conflict.

Hundreds of its troops remain in Syria and there are frequent repots of Russian warplanes carrying out frequent airstrikes on both Greater Idlib militants and the terrorist pockets in Central Syria.

In recent weeks there’s been a ramping up in activity. A ground operation is also expected in Greater Idlib, but there’s no significant movement as of midday on September 14th.

People are suffering in every country because of a couple thousand billionaires who installed their rules over the whole planet who gave them the right ???

Why the Armies of the world fight each other instead of fighting our global Psycho Tyrannts , why is the Police beating up their folks, grannies and children, who pay taxes and not the criminal Politicians who steel and pay nothing???

People of the world stop working for these demonic creatures, who use and abuse us daily unite and show them the middle finger, support each other but stop being prostitutes of Creatures from the hell who steal half of our income and tax everything house, car etc. but they pay nothing and the retarded people sell their asses for paper money which looses every year 10% of its worths, while this Scum invented this “plandemic” and also this “jab” because “they care so much for the ordinary people” give me a break!!!

Wake up Humans the Puppetmasters pushed to much, im calling all people Worldwide to show this Evil resistance now!!!

“Criminal politicians” and “Corporates Billionaires” Does that include Russia& Russian too or not?

Every Nation Worldwide suffers from these Parasites

Great, that’s same discourse as that of the United States. Create “terrorists” and then fight them. Really. President Putin makes the effort of saying: “you control 90% of Syria’s territory”. Well, let Russian forces leave and you’ll have another Afghanistan. That’s how much Bashar’s people are in control.

Fog of War
Reply to  World_Eye

The Syrians with Russian help should have launched an opertaion over the Euphretes a long time ago and taken the area back,i predict the Americans wouldn’t have the stomach for a fight,who was it that said the only thing to fear is fear itself,we have just seen what happened to them in Afghanistan.

Assad is lucky to have the support of Syrian Kurds. If Syrian Kurds were with Turkey then it would be game over.

Easy for you to say. And, yes, let’s see how that “no stomach for a fight” idea turns out.