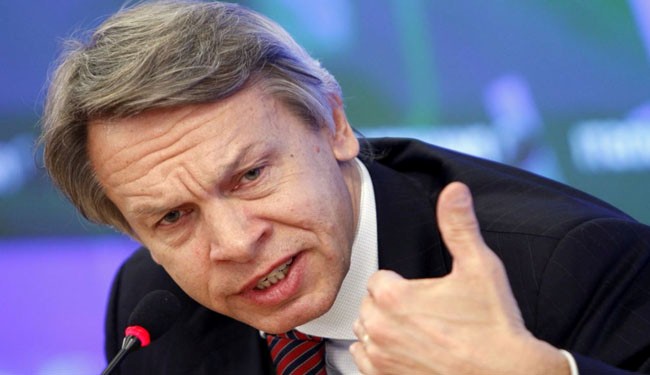 Originally appeared at Tanjug, translated by A. Đurić exclusively for SouthFront

Тhe head of the Russian Duma Foreign Affairs Committee Alexei Pushkov, said today that the world order is decided in Syria, and that it is not just a local conflict.

“The US knows that it will lose the image of the nation that is unavoidable if they experience failure in Syria, and the Secretary of State John Kerry is also aware of this for months,” Pushkov told Vienna daily “Die Presse”.

Pushkov said that today Russia is, in addition to the US and China, one of the three world powers, which independently can make decisions at the global level and stresses that the official Moscow, as the world power, intervened in Syria taking responsibility for the situation in the world.

He also believes that the EU is dependent on the United States.

Pushkov says that Russia will not send ground forces in Syria and that the goal of Russian engagement is to support the Syrian army and all those who fight against the Islamic state.

“We support Bashar al-Assad because he is still the legitimate president of Syria, and with the exception of the Kurds, the only force in the country which is fighting against the Islamic state on the ground,” he stressed.

Pushkov denied that Russia wants to teach Western nations a lesson in Syria.

“But we do not see a reason to keep aloof when the United States in the last two decades, having a monopoly on solving the problem in the Middle East, completely destroyed the region,” he said.

Pushkov believes that in the Middle East there is no vacuum made by the United States, but there is a disaster.

“Western analysts use the term vacuum, and it’s only a polite way of saying that the Americans experienced a complete failure. Libya, Iraq, Syria, Yemen – US did not achieve anything other than chaos,” he believes.

Pushkov said that Russia is responsible for the security of its allies in Central Asia – Kazakhstan, Tajikistan and Kyrgyzstan.

“This is our vulnerable lobby, which is threatened by the Islamic state. It was time for someone to restore order in the Middle East,” he added.

According to him, the order in Syria was destroyed by someone else, reminding that the US wanted to overthrow Assad.

“When US President Barack Obama in 2012 found out about coup against Assad, which he prepared, will not work, he started to support radical Islamist groups along with Turkey, Qatar and Saudi Arabia. In Syria we intervened when the US targeted solution did not work. Syria needs a political solution, “says Pushkov.

He pointed out that Assad has supports of a large part of the Syrian population, and that a political solution can not be based on his overthrow, but on the talks between the government and opposition.

He added that Russian military action in Syria established balance and allowed a political solution, and without Russia, he is convinced, now Syria would not have any ceasefire, negotiations, and the Islamic State and Al Nusra would now divide Damascus among themselves.

The weakening or destruction of the Islamic state brings greater security to Russia, but if this terrorist organization gets stronger, it will represent a greater danger to Russia, he warned.

Asked about the danger of direct confrontation between Turkey and Russia in Syria, Pushkov said that Russia acted very responsibly after the downing of the Russian aircraft and killing of a Russian pilot.

No article appeared in Die Presse on this.