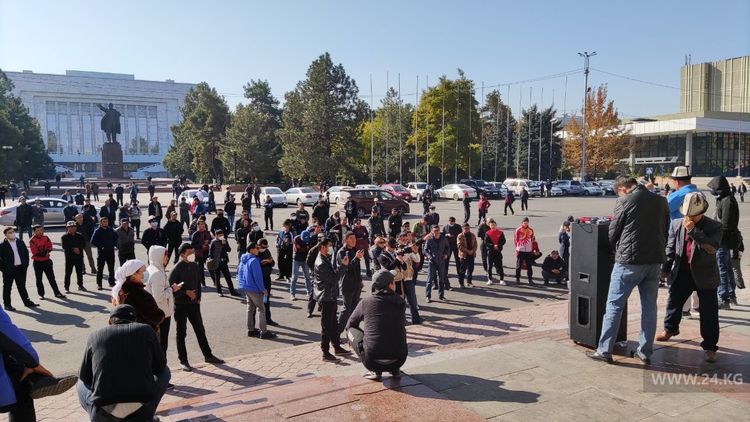 On October 14th, protests continue in front of the Parliament in Bishkek, Kyrgyzstan.

The protesters demand the resignation of the incumbent president and the appointment of Sadyr Japarov as prime minister.

However, President Sooronbai Jeenbekov did not sign this decision, specifying that it is illegal due to the lack of a quorum at the meeting.

The protesters came from different regions of Kyrgyzstan. They demand the resignation of President Sooronbai Jeenbekov. They also ask to speed up the procedure for appointing their leader as Prime Minister.

On October 14th, President Sooronbai Jeenbekov proposed to consider the issue of Sadyr Japarov at the next session of the parliament.

According to the press service of the head of state, he sent a letter to the speaker of the Jogorku Kenesh (Kyrgyz Parliament), Kanat Isayev.

It says that the decisions of the Jogorku Kenesh on approving the program, determining the structure and composition of the government, proposed by the candidate for prime minister Sadyr Japarov, were returned by the presidential apparatus to parliament due to existing violations of the law.

Thus, according to the president, the parliament needs to approve Sadyr Japarov as prime minister in accordance with the law, in order to stabilize the situation in the country.

“To stabilize the situation in Kyrgyzstan and the recognition of the new prime minister by other countries, it is important that all decisions are legitimate and the candidacy of the prime minister is approved in strict accordance with the legislation. I hope that the parliament will put an end to this process around the prime minister,” Jeenbekov said.

Jeenbekov said that he had put forward a demand to the parliament to consider the issue of approving Sadyr Japarov for the post of prime minister in compliance with all the requirements of the law.

At a meeting on October 13th, members of the Kyrgyz parliament approved a presidential decree on the introduction of a state of emergency in Bishkek, and also elected Kanat Isayev, who heads the pro-government faction “Kyrgyzstan”, as the new speaker. Isayev was nominated by a coalition of the parliamentary majority and supported by a majority in a secret ballot.

Protests in Kyrgyzstan didn’t begin on October 10th, but a week earlier – on October 4th.

The unrest began after demonstrators took to the streets of the capital Bishkek and stormed government buildings, demanding a new vote and the resignation of pro-Russia President Jeenbekov.

They said the election results had been rigged – claims which international monitors said were “credible” and a cause for “serious concern” – as rival groups clashed for power, with several politicians making bids to become prime minister.

They were accused of orchestrating the anti-government protests.

It seems ‘regime change’ is coming to Kyrgyzstan. Just what a pro western leader can do for the country is anyone’s guess. That leader will be looking to european countries for guidance, and brown envelopes. The same european countries who have bankrupted themselves and driven their populations into poverty and ruin. This isn’t the first time either and it seems the leaders of these countries have learned nothing from history. Maybe because most of them turn out to be lawyers.

People of Kyrgyzstan, look before you leap……or get pushed and end up as another US/nato mess who want to camp in your yard and throw stones at your neighbours.