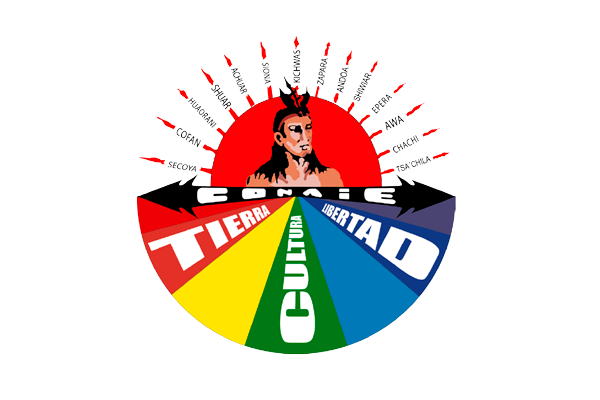 File image. The official logo of the Confederation of Indigenous Nationalities of Ecuador.

Protests continue throughout Ecuador despite the release of Leonidas Iza, leader of the Confederation of Indigenous Nationalities of Ecuador (CONAIE).

Indigenous people, who make up over a million of Ecuador’s 17.7 million citizens, took to the streets on June 13 to protest against fuel prices and living costs. Despite being an oil producer, the prices of fuel almost doubled in Ecuador over the last two years. The price of diesel went from $1 to $1.90 per gallon, while the price of gasoline rose from $1.75 to $2.55 per gallon.

The CONAIE, considered a powerhouse in Ecuadorian politics, called for the protests which saw thousands of people blocking key roads across the country. The protestors flocked towards the capital Quito on foot and on the back of trucks. They used sand, rocks and tree branches to partly block access to the city.

Iza was arrested on the second day of the mass protest. As the leader of CONAIE, has was accused of paralyzing public transport services.

The Ecuador’s conservative government led President Guillermo Lasso faced a backlash over the arrest of Iza. Supporters of CONAIE even stormed the prosecutor’s office demanding freedom for their leader.

Just a day after his arrest, a judge ordered Iza’s release pending trial on sabotage. A charge that could bring the leader up to three years in jail.

After his release, Iza vowed that the “struggle” will continue. On the same day, the CONAIE said that more than 9,000 protesters participated in roadblocks in 14 of Ecuador’s 24 provinces. Some of the protesters stepped up their demands, calling for the overthrow of the government.

So far, only few protesters have been arrested by the authorities. On the other hand, the government claims that at least ten military service members were wounded while attempting to reopen roads blocked by the protesters.

Last October, Lasso froze fuel prices after a round of CONAIE-led protests which saw a series of clashes with the authorities. Dozens were arrested and several people, including policemen, were wounded. Ultimately, the freeze failed to slow down inflation, which came in at 3.4% in May.

The CONAIE helped topple three Ecuadoran presidents in 1997, 2000 and 2005. The highly- influential indigenous organization could be on the brink of overthrowing a fourth president. Previous talks between the two sides were fruitless.

In Ecuador they are protesting against $1.90 per gallon while in Canada people obediently accept $2 per litre. That’s like $7 per gallon. I guess that’s what happens when the police beat up, trample with horses and the mass media smear peaceful demonstrators for trying to protect their supposed rights under the charter of rights and freedoms. If the Charter was proven not to be worth the paper is written on as the criminals in the government infringe upon it with impunity, what expectations should Canadians have at protecting them against the corrupt money syndicates who control the pricing of oil.

Canadians like to be dominated, abused, told what to do, how to think by their racist supremacist Jewish slave masters.

i am confused
Reply to  Abraham Lincoln

not true, it just those french rear kissers in Quebec sadly they large enough to keep the drama teacher in power,

I’m from Ecuador, Guayaquil city. Yeah, protests continue despite release of Indigenous leader, because there are 10 points that the government do not comply. I mean fuel prices is not the only reason for the current protest, for example; Lasso is piece of trash, he serves obediently IMF policies, he lies declaring that Public Institutions are bankrupt, as a result he tries to privatize Public Institutions (State-owned) in order to sell them at a low prices. Conaie and Lasso’s government have gathered before (three times) to achieve an agreement but the government have not complied with its word.

when I was in Quito nearly all were satisfied w Correa

Look no further than that clown Schwab in Davos and his various stooges in offices all over the world. Time for countries to begin doxxing them and assisting them in making better decisions for their Peoples.