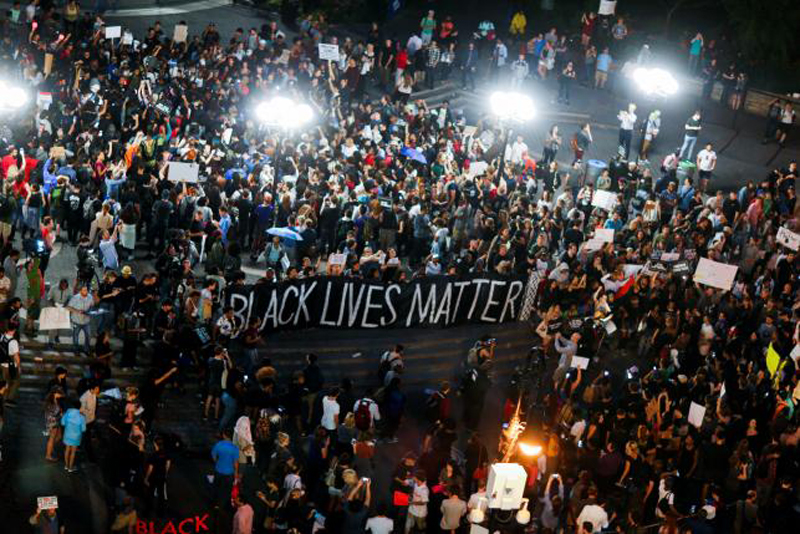 Protests against the killings of two black men by police were held in a number of US cities on July 9. Demonstrators blocked main roads in the cities, leading to numerous arrests, scuffles and injuries in confrontations between police and protesters, Reuters reported on Sunday.

Sunday became the third day of widespread protests after the killing of Philando Castile by police officers on July 6 and the death of Alton Sterling on July 5. Protests in Baton Rouge and St. Paul, cities where the killings took place, were held on July 9.

On Saturday evening, a major thoroughfare linking the Twin Cities, I-94 was shut down by hundreds of protesters. According to St. Paul police, demonstrators threw bottles, construction rebar and rocks at police officers, wounding at least three of them. Police had to use marking rounds and smoke bombs to drive away the crowd, and made arrests. Protesters said that police also used tear gas and rubber bullets. On Sunday police had started to clean the highway of debris and prepare it for re-opening.

During a march in Baton Rouge, there were scuffles between riot police and Black Panther activists, who had shotguns – Louisiana law allows to carry weapons openly. As a result, after a short standoff later in the evening, riot police arrested at least 30 protesters, including famous black activist and former Baltimore mayoral candidate Deray McKesson, and recovered weapons.

Hundreds of protesters marched from City Hall to Union Square in New York, some of them chanted: “No racist police, no justice, no peace”. The crowd swelled to around a thousand people, closing down Fifth Avenue.

New York police said that about a dozen protesters were arrested for shutting down a major city highway.

These two recent shooting deaths of black men by police come after several years of contentious killings by law enforcement officers, including the death of the teenager Michael Brown, caused riots and weeks of protests in the St. Louis suburb of Ferguson in the summer of 2014.

The Truth About The Alton Sterling and Philando Castile Shootings is avilible in the video below. https://www.youtube.com/watch?time_continue=559&v=RJPFdS6SSgQ

This is new form of BOKOHARAM/ This Black Haram. Leave the afterthoght alone. It takes just one or two trained bullets to kill a victim in ctrcumstances. t