A congress building in Paraguay has been set in fire by protesters after adoption of an amendment to the country’s constitution. 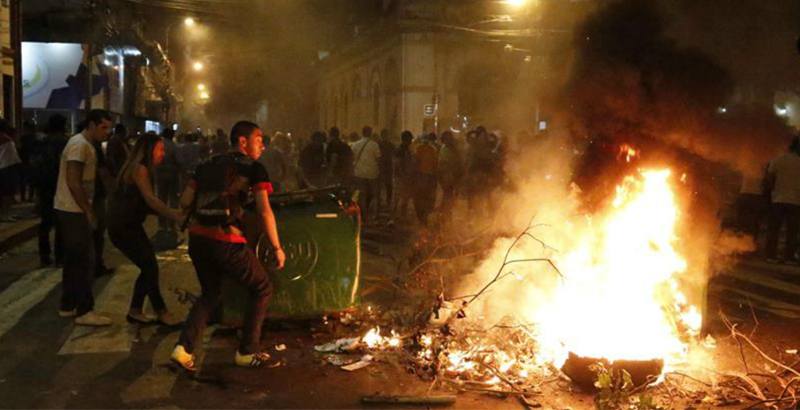 Protesters in Paraguay have set a congress building on fire after adoption of an amendment that would allow current President Horacio Cartes to be re-elected for another term, the Todo Noticias TV-channel reported.

According to the TV-channel, a group of protesters broke into the parliament building in Asuncion and started to set fire to various items. Reportedly, as a result of the riots, several people, including one deputy, were injured. BBC Mundo reported about 28 persons, who were wounded near the parliament building.

The police forces, including mounted police, and water cannons have been concentrated around the burning building of the parliament. Reportedly, officers of the Attorney General’s Office of Paraguay have also been involved in the operation.

According to the EFE news agency, Paraguayan policemen shot dead a man in the building of a local party. As chairman of the Authentic Radical Liberal Party, Ephrain Alegre, told the news agency, police “barbarically” burst into their building in the center of the city and began to shoot at demonstrators, who were inside. As a result, one young man was killed, several more people were seriously wounded.

Reportedly, in addition to the parliament building, protesters also held rallies against offices of political parties that supported the amendment. They completely looted the offices, some of which also were set on fire.

The head of the Chamber of Deputies of the Parliament, which should consider the draft amendments after its approval by the Senate, called on fellow citizens to calm down and said that this consideration is postponed until April 4.

According to the President, the fire in the congress building once again demonstrated that protesters “do not stint in the means to achieve their goal – destruction of the democracy and political and economic stability in the country.”

“I call on all my fellow citizens to a dialogue and respect in the face of the existing differences,” Cartes wrote. The President also stressed that democracy “cannot be captured and cannot be supported by violent methods.” 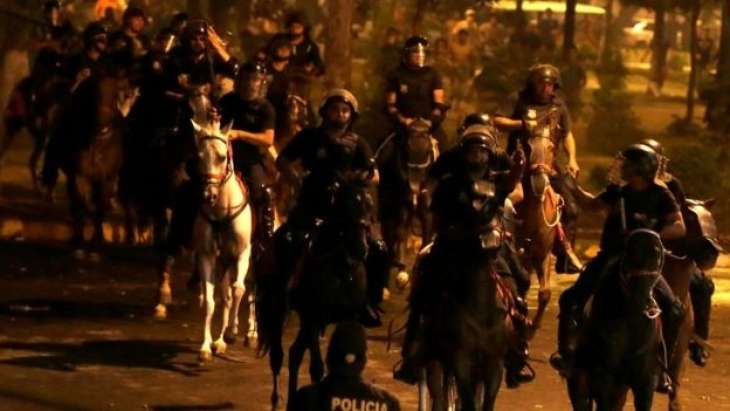 Mounted units charged through the streets during clashes (Photo: Reuters) 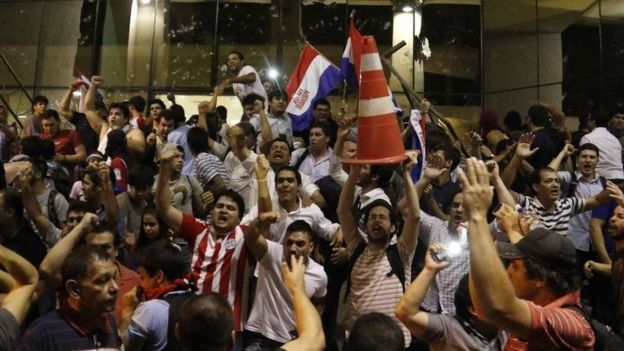 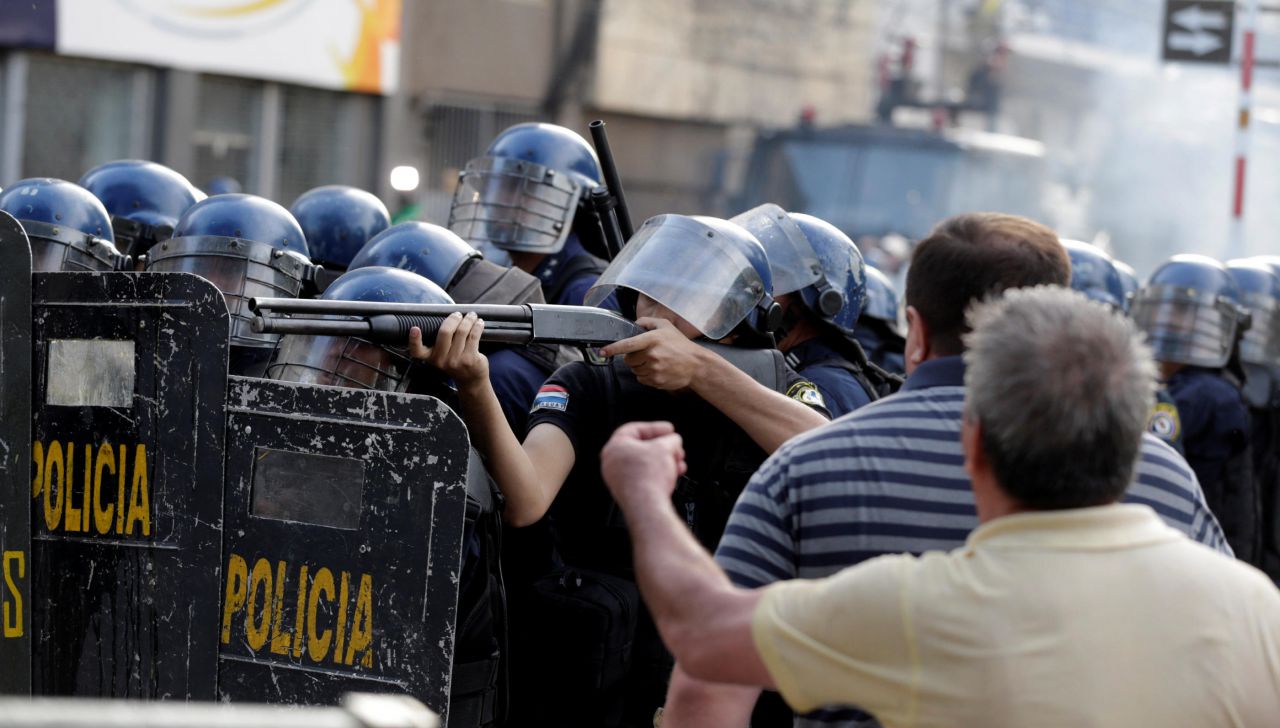 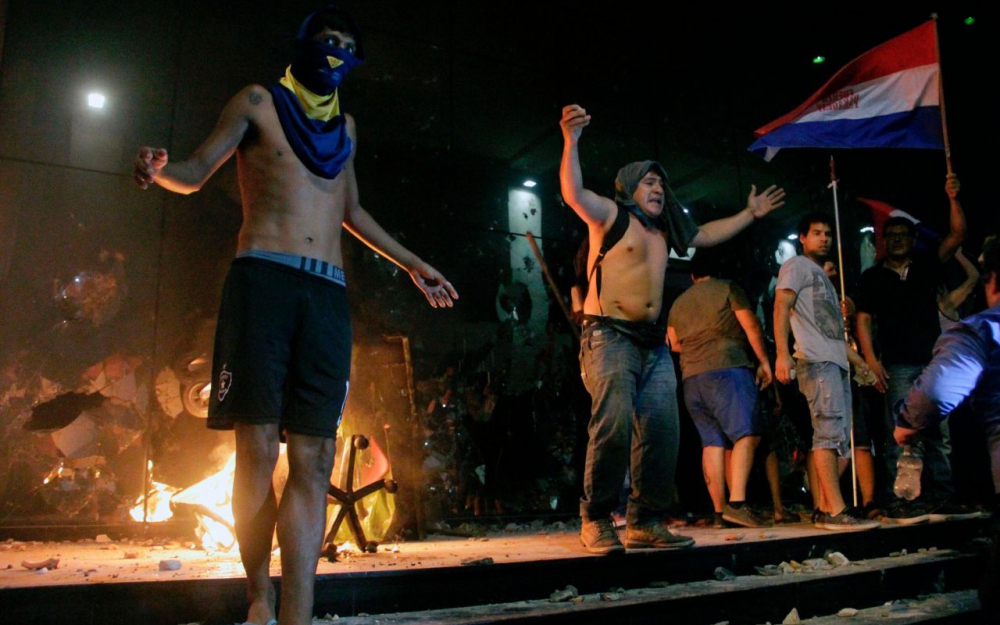 I value SouthFront because you don’t blindly root for governments against rebellions or vice versa, for the left vs. the right or vice versa, but rather you follow and build support for all those who are putting their lives on the line in combat against the Global Empire as it maneuvers and prepares for a final war of world conquest.

I have no doubt,the crisis in Paraguay fits into this somehow, but I don’t find any clues in this article. Could you or some reader give us a playbook?

What is the character of this government and its various opponents? What is the evidence and logic concerning who wants it gone and why? Why should we, folks of many persuasions who came together out of concern for those who are resisting the Empire in the Donbas, Syria and Yemen, care?

There are a number of issues with the government there, Haywood. Like everywhere else, it’s complex. But this protest focused most intensely on the mere idea of a second term for a president – any president – in Paraguay.

Is the current president good/bad? That’s not the overriding issue. It doesn’t matter – many citizens have an intensely visceral reaction to anything resembling the dictatorships of the past. Of course anyone who doesn’t like the current president is opposed, but so are many that are either indifferent to his leadership or approve of it. Political insiders changing the constitution to keep their favorite candidate (current president) in just smacks of cronyism and looks too much like the way things ended up going downhill in the past. That’s the exact reason they wrote specific provisions into their constitution prohibiting a second term. The citizens are incensed that politicians change the rules whenever it suits them.

That said, he seems like a rich, shady, conniving thief involved in all sorts of illegal stuff, yet always invokes the politician’s mantra of “I’m for the little people”. He’s the last person Paraguay should make an exception for a second term, much less change the constitution itself to permit him to do so. It’s up to the people of Paraguay though, and they all collectively agreed ‘Never Again’ to multi-term presidents. They can simply vote against him in the next election, but they (rightfully so) figure why should that weasel (via his crony lawmakers) have the rules changed?

What’s the CIA, Soros, Goldman Sachs up to there? How does this play in terms of their project of removing governments in Bolivia, Ecuador and Brazil that are more or less challenging their interests?

Nobody in the U.S. .gov is paying any attention – there really are no interests there. Tiny country, resource poor. The only thing Americans can exploit there is cheap labor, but it’s landlocked. Easier to exploit other South American cheap labor in countries with ports. Would only be of interest to U.S. if they had a socialist oligarch in charge that needed regime changing. Actually, perfect conditions for socialist revolution, but they’re looking at Argentina and passing on that. Current pres. made his cash in tobacco and soft drinks, so U.S. tobacco companies and Coca-Cola can’t even get their foot in the door. It’s basically a mob-ruled country that self-exploits. U.S. drug manufacturers like to experiment on people in Paraguay for some reason but have little market in the country. Whatever other business interests the U.S. has there are all pretty low-key. I don’t see any particular spin in the MSM on the situation there – a sure sign that CIA, Soros, GS don’t care.

That’s what I thought immediately on reading this. It’s a non-story for north Americans. Venezuela IS a story and Bolivia could be a story, but trouble in Uruguay – the brave little democracy that really ‘hearts’ America? Or is that Paraguay.